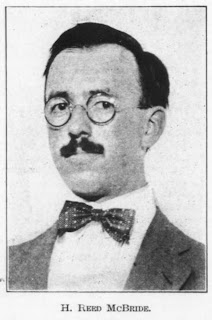 Hubbell Reed McBride was born on May 21, 1892, in Mifflin, Ohio, according to his birth certificate at Ancestry.com. Mifflin is east of Mansfield which was named as McBride’s birthplace on his World War II draft card. McBride’s parents were Washington McBride and Mary Ann Au.
The 1900 U.S. Federal Census recorded McBride as the sixth of eight siblings, six males and two females. Their father was a farmer. The family lived in Mifflin.
In the 1910 census, McBride’s widow mother was the head of the household. She and seven of her children resided in Mifflin on Wooster Road.
Richland Source said McBride graduated from Mansfield High School in 1912 and the yearbook published his drawings of farm animals.
The Farm Journal Farmers’ Directory of Richland County, Ohio, 1915, listed McBride.
At some point that year McBride ventured to Cleveland. Editor & Publisher, July 21, 1917, said

Mr. McBride has been a cartoonist for about two years. He commenced with the Newspaper Enterprise Association in Cleveland. His cartoons were along the more serious lines—you wouldn’t think so from the one above—and were printed in all of the newspapers that comprise that Association. He developed something entirely new—a setting in the form of wiggly lines that was extremely attractive, and that held the attention of all who followed his work. He came to New York about six months ago, where he is freelancing. He has contributed to a number of the newspapers and magazines, along the line which he so successfully followed in Cleveland. 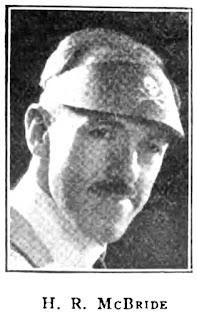 It was in 1915 that McBride learned to know what the phrase “struggling artist” means. He was 22 then, and had come to Cleveland from his home on a farm near Mansfield, O., with the hope of “catching on” some place where he could foster his ambition to draw. For a month he worked in a restaurant at $12 a week. Then he found a place in the art department of a local bag company.
His first job as a newspaper cartoonist was with the Newspaper Enterprise Association, where he illustrated jokes and drew an occasional cartoon for a salary of $10 a week.
“I can’t draw very well but I’ve got to have a job” was the easy he applied, and it was the utter sincerity of this appeal which won him a place, according to the man who hired him.
After a year and a half with the N. E. A., McBride came to New York.
“Life was hard—I didn’t know a soul when I came and I was timid about going after work and charging for it after I got it,” he says. “Editor & Publisher gave me my first work in New York. I was drafted into the army after 6 months and spent 15 months in the army, 8 of them as art director of Air Scout, an air service publication.”

On June 5, 1917, McBride signed his World War I draft card. His address was 264 West 23rd Street in Manhattan. The artist said he was a private in the “Marine Naval Reserve Corps.” McBride’s description was five foot eight, medium build, with black eyes and hair.
McBride was the subject of a New York Sun, August 2, 1917, article about conscripts.

Another man who visited the Julia Richman High School was Hubbell Reed McBride, an artist. He had a roll of posters that he had drawn appealing to young men to go into the army or navy. He said he thought he could be of more service to the nation as an artist than as a soldier. Being told that the prescribed industrial exemptions did not fit his case he wrote on a blank form, “I am opposed to the taking of human life.”

Hubbell Reed McBride, who draws recruiting cartoons that sound the call to the colors as loud as any bugle, but told Board 154 he had scruples against personal participation in violent exercise on the battlefield, has suffered a chance of heart. He stopped in at the board’s headquarters long enough yesterday to withdraw his exemption claim and ask the way to the nearest naval recruiting station.

According to Editor & Publisher, June 29, 1918, McBride served in the Signal Corps.

H. R. McBride, the cartoonist, whose work has frequently appeared in the columns of The Editor and Publisher, and who is now a private in the aviation section of the Signal Corps, is the staff artist of the Air Scout, the official organ of the Aeronautical Camp at Garden City. McBride’s pen has lost none of its power, and the pages of the Air Scout are enlivened by many examples of his distinctive work.

The Veterans Administration Master Index, at Ancestry.com, said he was discharged December 3, 1918.
Editor & Publisher, August 9, 1924, said “After the Armistice McBride free-lanced in New York for 4 years, trying to popularize a difficult style with little or no results.”
McBride has not yet been found in the 1920 census.

Today McBride “has arrived” as they say. He has perfected an individual style. His drawing are widely known. He is a consistent contributor to Life and other publications. In his spare time he is completing a series of 36 figures of President Roosevelt—pen drawings—which he says will be the best serious work he has yet done. … https://www.loc.gov/resource/ppmsca.36101/
… McBride will draw cartoons for the new Macfadden evening tabloid to be  launched in New York soon.

McBride’s wife passed away June 1, 1939, in the Bronx at her home, 4570 Spuyten Duyvil Parkway. The cause was breast cancer. According to the 1940 census McBride lived alone at the same address. He was self-employed snd earned $1,596 in 1939.
The Board of Elections of the City of New York List of Enrolled Voters for the Year 1941–1942 said McBride’s address was  240 East 47th Street.
On April 26, 1942, McBride signed his World War I draft card. The artist resided at 145 East 47th Street in Manhattan. His description was five feet nine inches, 130 pounds, with hazel eyes and brown hair. Manhattan directories for 1942 and 1943 said he had a studio at 320 East 42nd Street.
Throughout the 1940s McBride was a regular contributor to Dell’s Animal Comics (below), Our Gang Comics and Four Color Comics. He also drew Flip and Dip. 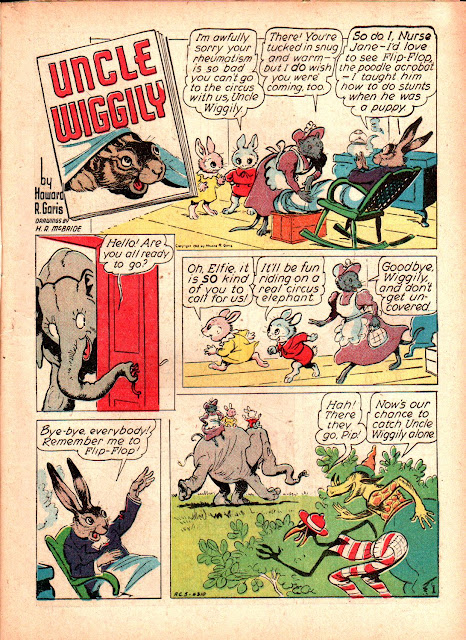 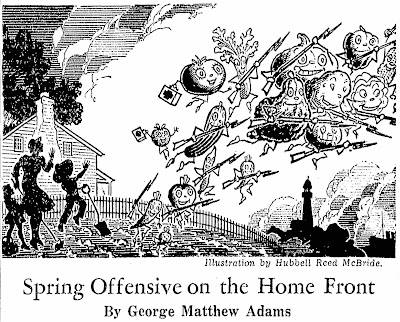 Around the mid-1940s, McBride moved to Mansfield, Ohio, where he painted a number of murals.
One of McBride’s last works was a mural. The Motion Picture Herald, August 6, 1960 said

McBride Murals Add Color To Trans-Texas Theatres
H. R. McBride, famous for his outdoor murals which decorate screens from Odessa to Galveston, recently completed attention-getting mural paintings for both the Burnet snd Chief drive-in theaters, two Austin houses of the Trans-Texas Theatres, Inc. His mural for the Burnet was accorded a four-column photo and story break in the Austin Stateman. Mr. Earl Podolnick, president of the circuit, advises that “The new murals, painted in gorgeous colors, are most beautiful and outstanding, and have really attracted the attention of all.” He also reports that the management has been receiving “great comments” from patrons.
The stunt received wide coverage, and aided box office receipts.

McBride passed away on December 31, 1960, in Dallas, Texas. He was laid to rest at Odd Fellows Cemetery.
* About Jeanne B. (Pascal) McBride
Pascal was born in France on August 14, 1891. The birthdate is from her New York, New York death certificate which was transcribed at Ancestry.com. Her birthplace was recorded as Saratoga Springs, New York. A passenger list at Ancestry.com said Pascal, her mother and sister, Alice, sailed from Havre, France on October 26, 1897. They arrived at the port of New York on October 24, 1897. Their final destination was Saratoga Springs where Pascal’s father, Paul, was counted in the 1892 New York state census.
At some point the family moved to Washington, D.C., where Paul Pascal was an art instructor. The 1900 census said Pascal was born in France and her family resided at 317 Harrison Street in Washington, D.C.
The Washington Post, June 27, 1905, published the Health Office’s death list which included Pascal’s father, who passed away at the Washington Asylum Hospital. Find a Grave said he passed away on June 24, 1905.
Pascal was enrolled in the Saint Rose’s Industrial School where she was recorded, as one of 28 pupils, in the 1910 census.
The 1914 Washington, D.C. city directory listed Pascal, an artist, and her widow mother at 1123 11th, Northwest.
The 1915 New York state census said Pascal, her father(!?) and mother, and five siblings lived in New York City at 661 West 170th Street. The census said Pascal was born in the United States.
How and when Pascal met Hubbell Reed McBride is not known. They obtained a Bronx-issued marriage license on December 7, 1921.
A brief profile of Pascal was published in The Artists of Washington, D.C., 1796–1996 (1995).

Pascal, Jeanne B. Painter born in France in 1891, the daughter of Paul Pascal (qv). She came with her family to Washington, DC, in 1898 and became interested in art watching her father paint in his Washington, DC, studio. Following her father’s death in 1901 [sic], the family was poverty-stricken and she was placed in an orphan asylum. She maintained her interest in painting and finally persuaded E. C. Messner (qv) to allow her to study at the Corcoran School of Art. Like her father, she specialized in watercolor renderings of orientalist scenes, some almost indistinguishable from his. She is listed in local references until 1914.