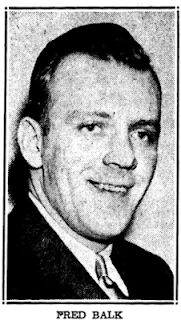 Fred John Balk was born Florian Bialk on August 30, 1905, in Chicago, Illinois. The Cook County, Illinois Birth Certificates Index, at Ancestry.com, said his parents were John Bialk and Martha Holcher, both Polish emigrants. In the 1910 U.S. Federal Census, Balk was the fourth of five siblings. The family resided in Chicago at 2511 Southport Avenue. Balk’s father was a police officer who passed away, from a gunshot wound, on September 24, 1916.
The 1920 census recorded Balk, his mother and three sisters in Chicago at 2645 Magnolia Street. Balk was at the same address in the 1930 census. His occupation was window trimmer.
The Chicago Daily Times, June 19, 1933, said “Fred Balk placed five cartoons with national mags in a week after playing for them for months.” American Newspaper Comics (2012) said Balk drew the Associated Press daily panel, Punky, which ran from November 30, 1936 to November 27, 1937. The Harrisburg Telegraph, November 30, 1936, published an article about Balk and Punky.

“Punky,” a real, wholesome, natural and human little boy makes his bow to readers of the Harrisburg Telegraph and a half hundred other newspapers throughout the country today.
But “Punky” will mean more to Harrisburgers than to other communities since his creator, Fred Balk, lives here.
There is an interesting story behind the story of “Punky.” Mr. Balk like many children preferred pencil and chalk to other playthings of childhood. He sketched continuously on walls, floors, books, pads, ceilings when he could reach them. His school days were tragically interrupted by the slaying of his father, a sargeant [sic] of Chicago detectives who fell in line of duty when the artist-to-be was ten years of age. Mr. Balk had to go to work but he arranged to attend continuation school and later completed a course in the Academy of Fine Arts. He then struck out on his own as an artist but the world turned down his offerings. Finally he returned to his instructor with turned down samples of his wares and asked: “What’s the matter with these?”
The instructor countered with, “Fred, why don’t you take up prize fighting?”
And Fred did. Scaling 6 feet, one with a weight of 195 pounds he added boxing for good measure.
But he couldn’t drop the pencil and chalk and after establishing a cellar studio in Chicago, sketched and sketched and sketched some more.
Always memories of two nephews, his favorite boys guided his pen. And in February last year magazines started buying his output. Since then he has sold thirty-seven panels to the Saturday Evening Post—one appears in the current number, a great number to a score and more of other magazines.
Mr. Balk cannot determine the exact date of Punky's birth but he believes the little chap has been a part of him since the days of his own frustrated youth. He made a series of Punky’s daily activities, submitted them to the Associated Press which immediately accepted.
Mr. Balk is married but Punky is his only son.
And to him Punky is a real flesh and blood little boy.

According to the 1940 census, “Frederick Balk” was a freelance cartoonist living in New York City at 611 West 113th Street. (The previous censuses had Balk’s birth surname Bialk.) He had moved sometime after 1935. Balk’s roommate, Dorothy Krieger, was a stenographer who later became his wife.
The same address was on Balk’s World War II draft card which he signed on October 16, 1940. The card had his name as “Fred John Balk” who was six feet one inch, 190 pounds, with blue eyes and blonde hair. Balk’s Department of Veterans Affairs file said he served in the Navy from May 4, 1942 to September 28, 1945.
Chemical Warfare Service News Letter, July 1942, reprinted Balk’s Collier’s cartoon with the credit line “Fred Balk, now an apprentice seaman at Newport.”
In 1948 Balk’s cartoons appeared in the Sunday magazine, This Week. Samples are here and here.
For the New York Sunday News, Balk created Gramps which ran three times on July 22, 1956, October 7, 1956 and April 21, 1957.
Balk’s mother passed away April 6, 1961, in Chicago.
Balk passed away on January 30, 1982. An obituary appeared in the Asbury Park Press, February 1, 1982.

Fred Balk, 76; a former cartoonist Manchester Township—Fred Balk, a cartoonist, died Saturday at Community Memorial Hospital, Toms River. He was 76. Mr. Balk was born in Chicago and lived most of his life in New York. He resided in Bloomfield before moving here three years ago. Mr. Balk was the creator of the cartoons “Gramps,” “Doc,” and “Punky.” He was a member of the Audubon Society in the Pine Ridge section of the township. His wife, Dorothy, died in 1977. Surviving are two sisters, Eleanor Daugherty, Chicago, and Betty Krautter, High Point, S.C. The Anderson & Campbell Funeral Home, here, is in charge of arrangements.