After Malcolm Wheeler-Nicholson launched his corporation near the end of August 1925, he wasted no time putting material out into the field. Unfortunately, he missed the deadline for E&P's 1925 Syndicate Directory, so we need to find this stuff on our own, in piecemeal fashion and in the very few papers that took it.

The first definite Wheeler-Nicholson product we know of is a comic strip, The Adventures of Vivian Vanity, which started on September 29 1925. This strip about a glamor girl has only been found starting in one newspaper on time, the Syracuse Herald. This run was discovered by Leonardo de Sa, and I don't have any samples to show.

The strip was written by N. Brewster Morse, who was already known as a playwright and movie scripter. The art was by "Meetrich", a known pseudonym of Nicholas Afonsky. Why he chose to use a pen name for his first syndicated strip is unknown.

Along with the strip,Wheeler-Nicholson also made available a companion panel cartoon series, Vivian Vanity Says. This was in the mode of Flapper Fanny and other popular pretty girl panels of the day: 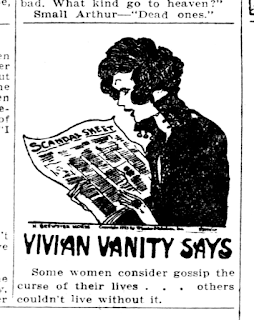 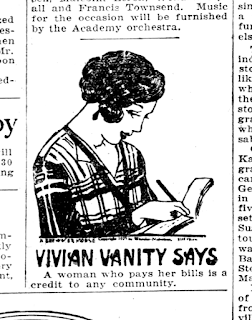 While this feature may have started concurrently with the strip, the earliest I can find are from November 1925. It is in November that I can finally find a newspaper running a selection of the Wheeler-Nicholson product. The Elmira Star-Gazette ran Vivian Vanity Says sporadically. Both the strip and the companion panel ended in January -- the panel on an unknown date, the strip on January 30 1926, as per the Syracuse Herald.

On a side note, in my book you'll find a note that Vivian Vanity Says does not merit a listing because the art was reused from day to day. As the above samples attest, that turns out not to be true.

There is good reason to believe that the end date from the Syracuse Herald is spot on. It was right at this time that N. Brewster Morse and Afonsky decided to jump ship from Wheeler-Nicholson. Here's a short article that ran in Variety on January 27 1926:

Two newspaper syndicates are in legal battle over the artistic output of Nicholas Afonsky and N. Brewster Morse. Wheeler-Nicholson Inc. claim a prior contract with Morse for both his and Afonsky's output and is suing the McClure Syndicate, alleging it is damaging them through having wrongfully entered into another agreement with Morse to release through the McClure channels. An accounting is asked for to determine the amount of damages.

As best I can tell, McClure backed down from poaching these two creators, but Morse did definitely leave Wheeler-Nicholson's employ. He spent the next few months writing the play The Half-Naked Truth, which was ready for rehearsals by May of that year. In an announcement about the play in Variety, Morse was credited as the former editorial director of Wheeler-Nicholson.

Afonsky, on the other hand, capitulated to Wheeler-Nicholson and stuck with the syndicate, even to the extent of being credited by his real name from there on.

Tomorrow we'll look at other early offerings of Wheeler-Nicholson, Inc.

Comments:
I found a few "The Adventures of Vivian Vanity" strips (and I use the term loosely) in the August 1926 Winnipeg Tribune. It's credited to Ruth Jane Williams and S. Delevante. Can't find any copyright.

Is this the same strip, resyndicated?

My delvings into the 1920s have on several occasions prompted leaps to conclusions that turned out false. After 2 years of hearing the whining of infallible lying politicians (2017 and 2021), so straightforward an aside as "that turns out not to be true" is joyfully refreshing; cheered me right up.

Chris : you have found samples of the second version of the strip, which we'll be covering about a half-dozen Wheeler-Nicholson posts from now. Stay tooned!

Hank: glad to have refreshed your joy; as many mistakes as I make, I should be able to send you to absolute niravana!