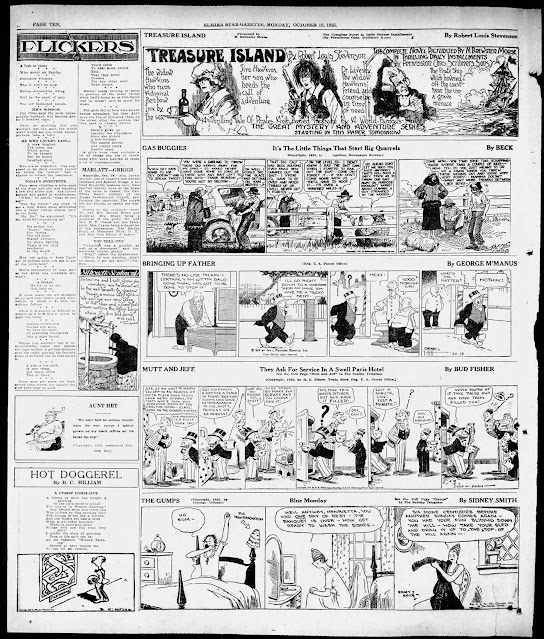 On October 19 1925, the starting date of the Great Mystery and Adventure Series (top of page), we also have a poem and cartoon feature called Hot Doggerel by B.C. Hilliam. Hilliam was a singer, songwriter and musician of some minor note. On this feature he also showed that he wasn't too bad of a cartoonist, either.

Hot Doggerel got a brief mention in the October 28 issue of Variety:

B.C. Hilliam, actor-author, has started to syndicate in 57 daily and weekly newspapers a verse subject, "Hot Doggerel." This is a comedy-poem, marketed through the Wheeler-Nicholson service.

The claim of 57 subscribing papers is laughable. Did they pick that number off of a bottle of ketchup?

I was hoping that Wheeler-Nicholson was also responsible for another verse feature on this page, Silhouette Sentiments, but it turns out this was a short-lived offering of Central Press Association.

Next, there were also a few illustrated sports features, all of which were penned by Joe Archibald. I find these starting in November but it wasn't until December 19 that his employment with the syndicate was announced in E&P. 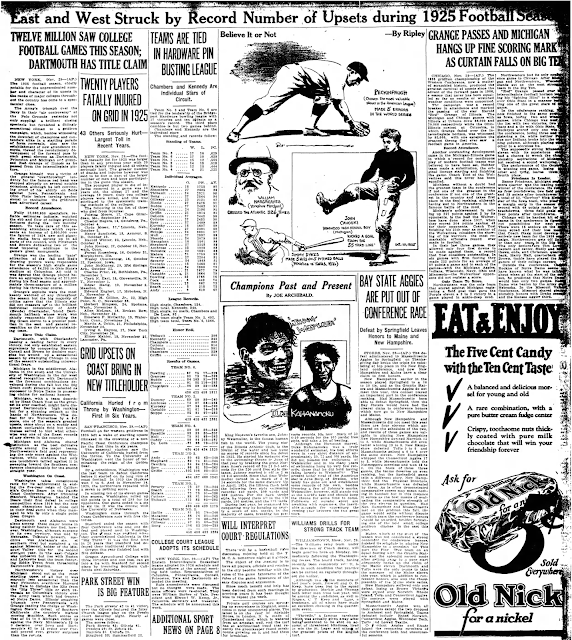 First up we have Champions Past and Present, a cartoon and printed column about sports stars. Above is a sample of the feature from the Bridgeport Telegram; this seems to have been the only Wheeler-Nicholson feature they used. 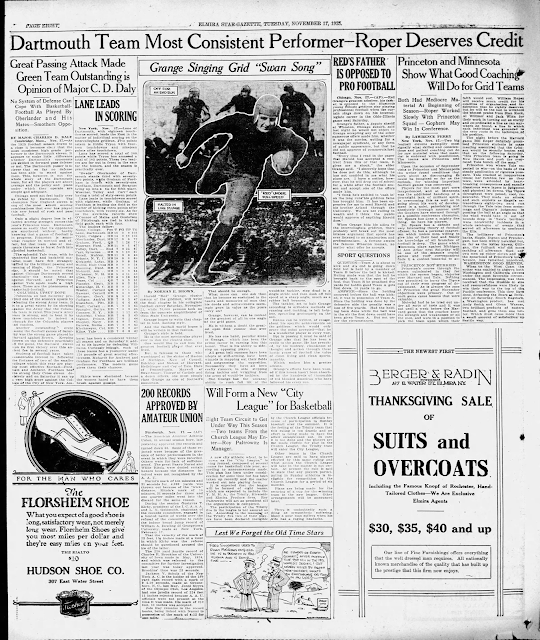 Next is a feature called Lest We Forget The Old Time Stars (often shortened a bit to Lest We Forget The Old Stars). This panel cartoon feature tells what happened to sports icons after they retired. What famous people did after they left public life seems to have been a particular fascination for the Wheeler-Nicholson crew -- the text column Where Are They Now? (see part 5 of this series) plows the same field. 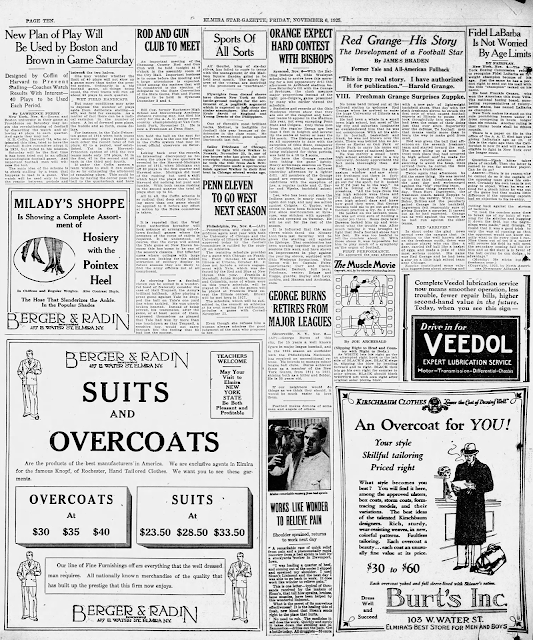 Finally, there is The Muscle Movie. In this unique feature, Archibald draws a little two panel cartoon diagram to illustrate a fine point of boxing. Although a pretty limited feature, I think it's one of the more intriguing in W-N's lackluster lineup. If Archibald could have widened the scope of the feature by covering a whole range of sports in this way, I bet it could have actually sold well.

All of Archibald's sports features seem to have ended by the end of January 1926. Unlike most of the W.N. material of 1925 - January 1926, though, which disappeared entirely, Archibald's backstock of these features is sometimes seen re-running later. He remained on staff with Wheeler-Nicholson past the great implosion of January 1926, and so maybe that's why.

That does it for the Wheeler-Nicholson features I can find that started in 1925. But perhaps the most amazing thing to say about this odd line-up of flotsam and jetsam is that practically all of it seems to have disappeared off the face of the earth by the end of January 1926. The only feature that definitely outlived the great purge of January 1926 is the Great Mystery and Adventure Series.

Is this because N. Brewster Morse left at the end of January? It seems too coincidental not to be connected. Granted Morse may have been a driving force at the syndicate, but was he so important that the syndicate all but folded without his guiding hand? Or could there have been some sort of contractual/legal issue? Could the Major have been foolish enough (or desperate enough) to have given Morse some stake in the business that obligated his other creators to Morse, and he was legally barred from using the material after that date?

The reason could also be that Morse's departure and the great exodus were all a part of some financial failing of the Major. Perhaps it was a mass walk-out becuase the Major wasn't paying his creators -- we know from his later history that Wheeler-Nicholson was not above stringing along his creators by making promises that ended up being worthless.

I have one final piece to throw into this puzzle which is so odd that I can't figure out how or even if it fits in. Here is a news story from Editor & Publisher, January 9 1926:

The Wheeler Syndicate, in its heyday, was a force to be reckoned with. After John Wheeler sold it to Brainard in 1916, though, it was never a major player -- mostly because Wheeler set up Brainard to buy a syndicate which he had hollowed out, Wheeler taking all the best creators and features with him to the newly created Bell Syndicate.

By the time 1925's E&P Syndicate Directory was published, the Wheeler Syndicate was advertising only seven features; a daily short story, a serial, a horoscope, two columns about natural history, a palm reading column, and a history feature. Dorothy Dix, a popular 'sob sister' that was their flagship item, had jumped shipped in early 1925.

Although several of Wheeler Syndicate's features continued in 1926, and still bore the Wheeler Syndicate copyright, Major Wheeler-Nicholson seems to have thought so little of them that he didn't bother advertising them in the 1926 E&P Syndicate Directory. In fact, Wheeler Syndicate slugs can be found all the way into the early 1930s, mostly on the daily story feature and a column titled History's Mysteries. By the late 1920s, though, their material is appearing in such minor papers I can't help but think it is just old stuff being resold by some bargain basement syndicate.

Did Wheeler-Nicholson maintain ownershp of this syndicate? I can't imagine he did -- with his savviness for marketing, there is no way he would pass up the free listings in the E&P Syndicate Directory year after year. My guess is that he -- or his investors -- sold off the syndicate. With the Great Implosion of Wheeler-Nicholson happening at the end of January he might well have resold it within a month of purchasing it, for a cash injection that may have been badly needed.

That's where we'll leave it for today. Tomorrow, a cash injection!

Comments:
Allan, thanks for this series. It’s very well-researched and informative. As you’ve noted, Major Wheeler-Nicholson is of great interest to many of us, due to his connection to DC Comics. I’m glad you’re helping to shed some light on this little-known corner of comics history. I’m curious about a couple of things. In discussing the Variety notice about “Hot Doggerel,” you dismiss the claim of it being syndicated in 57 newspapers as “laughable.” On what do you base that opinion? Do you have actual figures on this, or is it an educated guess? You also speculate that the Major may have offered N. Brewster Morse a stake in the business and characterize that as “foolish” or “desperate.” Isn’t it also possible that the Major had a respect for creator’s rights that was not the norm at that time? Seems to me there are different ways of looking at these things.

Hi Jim--
Thanks for the excellent questions.

The 57 papers claim is laughable because these features (except for the Great Mystery and Adventure Series) are scarcer than hen's teeth; 30+ years of looking by myself and others and we've come up with a bare handful of papers that took anything from W-N. COULD there have been 57 clients? Yes, but only if there were 57 taking this so-called blanket service and almost none were actually using any of the supplied features -- an exceedingly dim possibility. In the syndication business, client numbers are often padded by creative bookkeeping or outright fantasizing.

As for my other editorializing comment about the possibility that the Major might have signed over some control of his features to Morse, I stand by the characterization that to do so would have been foolish. Morse did not as far as we know have a partnership in the business, and in my opinion the owner of a business making his livelihood entirely dependent on the loyalty and goodwill of one single employee would be a recipe for disaster. I see no connection with creator's rights in such a situation -- Morse was not writing all the material that disappeared at the end of January, so I don't see how that applies. Certainly his bylined material would disappear, but why the material by other creators?