When we left you yesterday, the Major's syndicate seemed to be in a shambles. Other than the Great Mystery and Adventures Series comic strip, which continued in a modest number of papers, everything else syndicated by him seems to have disappeared at the end of January 1926. He'd also lost his editorial director and main writer, N. Brewster Morse.

By rights it seems like this should have been the end of Wheeler-Nicholson Inc., but the Major still had a few tricks up his sleeve. As per usual, I can't offer you anything but the few clues that have survived in the public record.

The company made not a peep in February and March of 1926, but a glimmer of life appeared in mid-April. Seemingly out of nowhere, a full page ad appeared in Editor & Publisher announcing a 'new' comic strip offering: 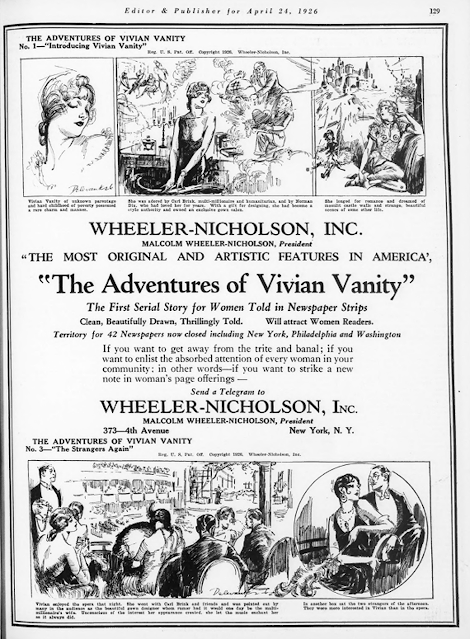 The Adventures of Vivian Vanity, the first comic strip offered by Wheeler-Nicholson, was now returning. It had died at the end of January 1926 along with everything else, but here it was reborn, with a new writer and artist. Writer Morse of course had to be replaced, and it was by Ruth Jane Williams, who also had taken over the Great Mystery and Adventure series. And while Nicholas Afonsky seemed to still be at work with the syndicate, the art on the resurrected strip was reassigned, this time to Sidney Delevante. We've met Delevante before, but only very briefly, with his work on the Hearst romantic cartoon series.

According to the ad, the new series of Vivian Vanity had already been snapped up in 42 different markets, including New York, Philadelphia and Washington. If that were true, this would be quite a triumph for the struggling syndicate.

The series began on May 10 in the Syracuse Herald, the earliest found, and we can find a few more stragglers adding it after that, like the Philadelphia Evening Ledger on May 31. If it truly got into 42 papers, they are surpringly elusive.

No additional features seem to have debuted in May, but perhaps that is because the Major was too busy pulling off the coup of the century. In the New York Times of May 31, we find this listing: 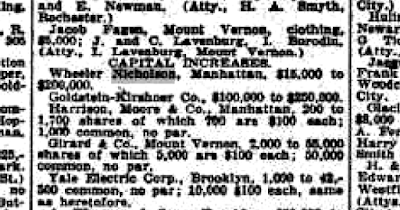 Miraculously, Wheeler-Nicholson, Inc. had apparently found a VERY serious angel, to the tune of added capitalization of $185,000. This sounds impressive even today, but in 1926 this was roughly equivalent to about $2 million. Sadly, there is no indication of who this was that provided the cash infusion, and I can find no other information about it (you would think it would rate an E&P article, but no).

The question that comes to my mind is this: Was it a load of hooey? I don't know what sort of qualification or checking goes into these New York Times listings, but it seems like with that sort of money Wheeler-Nicholson should have been capitalized well enough to last years even if their sales were abysmal. Of course, not to spoil what happens, but that was not to be, and thus I find myself very skeptical.

So let's see what Wheeler-Nicholson did with all that cash. Our first inkling is through an itty-bitty ad in the May 22 edition of Editor & Publisher saying that the syndicate is still claiming to have available a blanket service. If it existed at this time, it does a fine job of hiding: 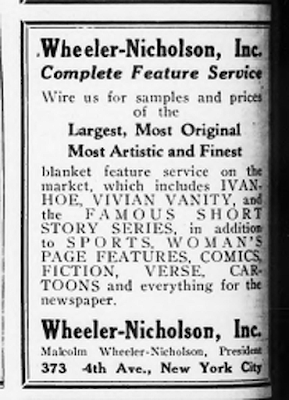 But then again, when you have just received $200,000 it still takes time to get new features contracted and ready for publication. So if you figure a month or so of lead time, you might expect Wheeler-Nicholson to come roaring back to life in July 1926. And you'd be right ... we'll see what happens in July 1926 tomorrow.

Comments:
It's not necessarily so that the syndicate DID receive cash. What might have happened was that the Certificate of Incorporation was amended to increase the AUTHORIZED capital of the corporation from $15,000 to $200,000, likely in anticipation of issuing more stock because of an investment. But the fact that more capital is authorized does not imply that the investment actually happened; it could have fallen through. By checking the records at the New York Department of State, you could at least turn up the amendment to the charter showing the increase in authorized capital.

One alternate possibility is that while the corporation may have increased its authorized capital to $200,000, it might have anticipated this coming in a number of tranches, from a number of different "angels," and rather than increase the authorized capital in dribs and drabs, the capital was increased in one go. Under this scenario, the company might not have gotten $185,000 in additional capital, but at least, perhaps, a portion of that.

E.O -- While I am not well-versed in high finance of this sort, what you say sure makes a lot of sense. You would think an investor or group of investors would not just hand over that kind of cash in one lump sum.

With what we'll see over the next few days' post, it would be fascinating to know how much it all would have cost. I know what you would have paid for a dozen eggs or a suit of clothes in 1926, but my sense of what starting a syndicate cost is very murky indeed.

The cash infusion actually was announced in E&P, as well as a deal with several New York printers that made them minority stockholders.

Just wanted to tell you how much I'm enjoying this unfolding detective story. The 1920s is a fascinating period in media history.

The material that Jim Davidson found could be interpreted in a few different ways, including the fact that the capital stock was increased to $200,000 *and*, separately, the three firms became minority stockholders. It would surprise me that someone would invest $185,000, considering the previous capitalization was $15,000, and become *minority* shareholders. If the three printers did get minority shares, it implies (to me, anyway) that they invested less than the $185,000 in increased capital.

Great find Jim. Don't know why that one didn't come up in my search of the same E&P issue.

These investors are tailor made for what we will see happens in tomorrow's post, makes perfect sense. Nice to see the puzzle pieces fit together so well.

I wonder if these 'investors' could have been accepting stock in exchange for their services, so that there was no actual money changing hands but the Major got to claim them as capital. Not sure if that passes muster in high finance.

It's not only perfectly legal, but not even particularly unusual, for entities to accept stock in lieu of cash for services rendered. That the printing firms could have accepted stock-for-services is a workable theory.