Obscurity of the Day: The Little Journeys of Nip and Tuck 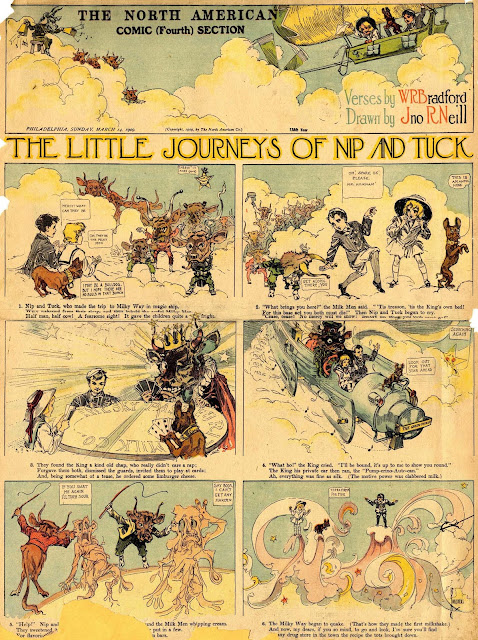 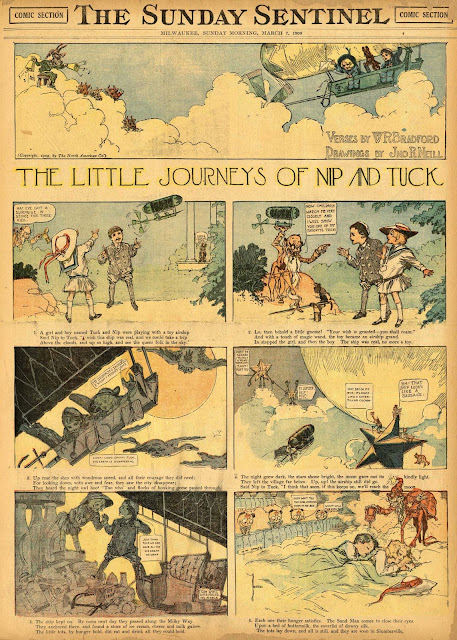 The comics editor at the Philadelphia North American must have thought he was about to strike gold when he had the opportunity to put together two bright stars of the cartooning universe. John R. Neill, already on the ladder to enduring fame for illustrating Baum's Oz books, was paired with W. R. Bradford, the wackiest comic strip writer this side of Rube Goldberg, to create a Little Nemo pastiche called The Little Journeys of Nip and Tuck.

Only problem was that the pairing stunk up the place like skunks having a spraying contest in a gym locker full of old athletic socks. It should have been a master class in amazing illustration paired with sparkling writing, but somehow the dynamic duo brought out the worst in each other. Neill's art is fussy and stiff without the impressive flourishes he should have been providing, and Bradford's verses, normally riotous stuff, is about as stuffy as a reading from Leviticus. Great ideas fall flat, opportunities are missed, and yet, with two such giants of the comics page, we always have the sense that with just a little shot of joyousness that is utterly lacking, it could have and should have been truly great.

The Little Journeys of Nip and Tuck ran in the Philadelphia North American's comic section from March 7 1909 to February 27 1910.

Comments:
The strip feels like it was designed to be "Buster Brown meets Little Nemo". Tuck looks and dresses like Buster Brown, and the talking dog in the first example looks and sounds like Tige's brother. Nip has a definite Nemo-like quality of innocence about him. The locales visited and the supporting characters encountered look to be from Slumberland's basement.

I believe that you've nailed the problem with the strip on the head...while the art is competently rendered, the strip lacks any sense of Buster Brown's mischief and humor and fails to inspire Little Nemo's sense of awe and wonder. Bob Carlin

Hello Allan-
A more fun knockoff of Nemo by a great "illustrator" (rather than cartoonist) was Pulitzer's The Explorigator" by Harry Grant Dart.
You say that 14 March 1909 is the first one, but it's actually 7 March, in fact, the page shown second (Milwaukee Sentinel) above. The strange thing about North American series that were made for covers, is that in syndication they had a standard slug made for the top picture that would support the client's masthead. This one seems to reflect parts of the first two episodes, the gnome in the airship, and the bull headed "Milk Men." I think the header changed often in the parent paper, but it never did in syndication. Kaptain Kiddo was like that too.

Mark -- The March 7 Sunday section was missing from the North American microfilm, so I used the Anaconda Standard to fill in that and several other 1909 dates that were missing. In the Anaconda paper the 3/14 issue is definitely the first installment of Little Journeys. So was that paper running a week late? Where is your 3/7 date coming from? (I'll have a number of other fixes to do if that darn Anaconda paper let me down).

Btw, I couldn't agree more about The Explorigator, and for that matter, just about anything Harry Grant Dart put his pen to.

Hello Allan-
The Sentinel page is the first one- It's even dated 7 March. And I have a breakdown of the NA for that date as well, the microfile I used did have it. Probably the Montana paper was running late, unless they picked it up starting with week 2.
Read the 7 March (Sentinel) page-Doesn't it seem like an introduction to the story? So, which one does Anaconda start with, the Gnome-airship or Bull-heads episode?

Aargh! Somehow that most obvious fact could not penetrate the rocky outcropping at the top of my head. Obviously it started on the 7th, have changed the post to cover up my stupidity.

Worse, that means Anaconda WAS a week late. Which means all my 1909 fill-ins are wrong, which means I've probably got other errors to fix as well.

If it's of any use to you, here's the North American breakdown for
7 March 1909:
THE LITTLE JOURNEYS OF NIP AND TUCK
(A gnome takes N & T on a trip through the milky way)
JINGLING JOHNSON BLOWS OFF A FEW RHYMES ABOUT OLD BOREAS
MUGGSY PROVIDES A SHOCK ABSORBER FOR A GOUTY MAN
WILLIE TRIES HIS HAND AT REDUCING DENTIST'S BILLS
TEACHER'S PET---HE WORKS A BLACK HAND GAME ON TUG SMITH
IT'S ONLY ETHELINDA---SHE MAKES MOTIONS LIKE A WRECK
TED'S OBJECT SPELLING LESSON---S-T-E-A-M and F-L-O-U-R