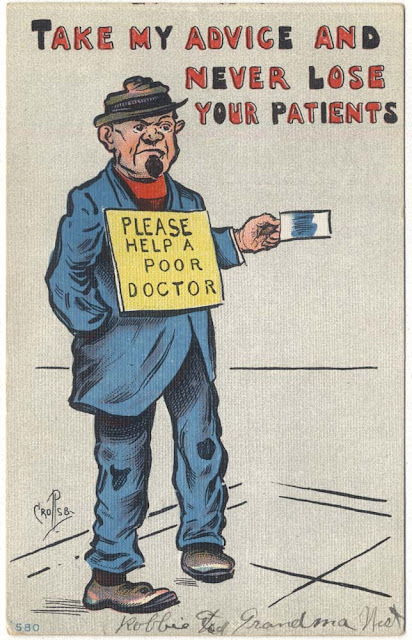 Here's another postcard from Series 580 (or S80) from an unknown publisher. As usual Percy Crosby lets us know with slapdash art that he was not happy about doing this job. This is the second card from the series that concerns doctors and offers a pretty pathetic pun. As I often wonder with these lesser cards, who actually opted to pay a penny for it (other than, obviously, Robbie's Grandma)?

As usual, I can't help but wonder about those black letters. Can

be some sort of anagram? How about "SPOILED YET".

Comments:
TYEDELOPIS is the medical term for a rash acquired by wearing too much tye dye t-shirts and jeans. This condition affects mainly Hippies, dropouts, and nonbathers.
No, wait a mo- It's the name the in ancient Bacterian language they gave to the city of Atlantis in their epic five-page creation myth; WUDEHELIZIS.
Actually, it's nothing. You keep hoping that ol'Perc' was better than he was, and the filled in letters in his post cards have some intelligent design to them, but it would seem they are always pointless, randomly chosen characters.
His ineptitude is again on display, One might assume the "Doctor" is holding a tin cup, classic equipment of beggery, but the Crosby grasp of perspective might confuse a reader to think the doc is presenting a card.
How does the sign stay on his chest? And of course, yet again, Crosby has a problem with limbs. He couldn't WANT to draw one leg six inches too short, could he? But couldn't he see how it looks, long before he'd ink, color and print it? Either he didn't care or he was a DADAist.