Obscurity of the Day- Strenuous Bobby 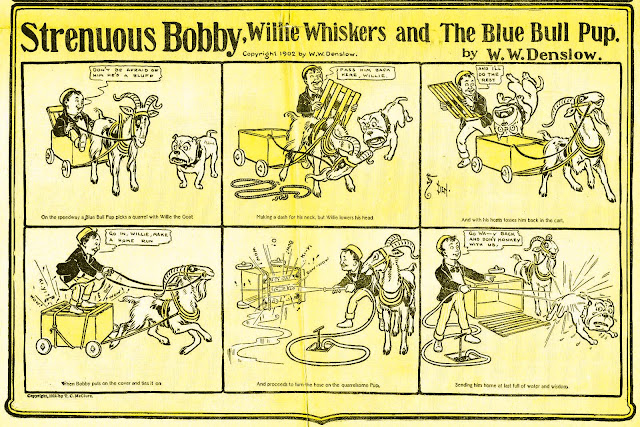 W.W. Denslow's signature feature in his stint with the McClure Syndicate was Billy Bounce, but he did try out a few other series. This one, Strenuous Bobby, is certainly the least of them. It ran just three times* from April 20 to May 18 1902**.

Our title character's name comes from Theodore Roosevelt's famed admonition that people should seek the strenuous life, overcoming hardship and succeeding through hard work. In the context of the strip, it merely means that Bobby will enter battle with superior forces and come out the winner. In the first instalment of the short series, Bobby meets and captures a goat, Willie Whiskers, after an hour-long battle royale. In the second, Bobby breaks Willie Whiskers to harness, and in the third the pair, now compatriots, take on a mean bulldog (shown above).

It seems like this would have been the jumping off point for a longer series, but perhaps Denslow, or his syndicate, realized that he wasn't really suited all that well to creating his own material*** -- he was much more successful adapting the works of others. It is probably for this reason that Strenuous Bobby was dropped and Denslow began adapting The Water Babies into comic form for the syndicate.

* In Douglas G. Greene and Michael Patrick Hearn's biography of Denslow, they claim a fourth episode, but I can find no evidence of it in the New York Press or Boston Post, my best sources for early McClure material.

*** Although Denslow is the purported writer on Billy Bounce, my bet is that he worked with an anonymous collaborator.

Comments:
Was Roosevelt, then, also the inspiration for Strenuous Teddy of the Kin-der-kids?

Yes, there were a number of strip titles and characters that used 'strenuous' at the time, all referencing back to TR.