Obscurities of the Day: Woman's First Thought is Man and In Darktown 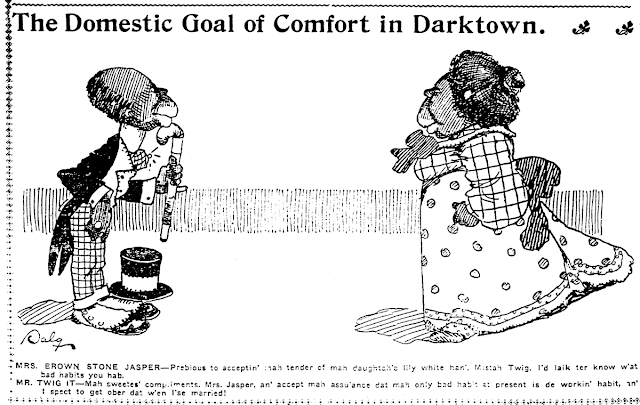 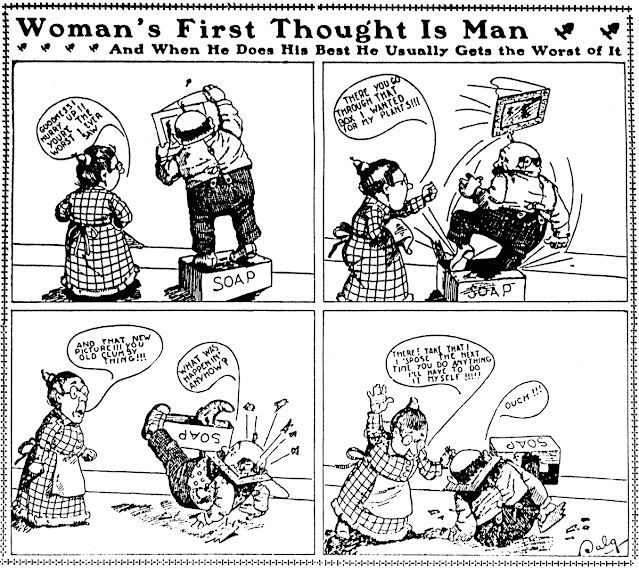 Here are a pair of obscurities I've been meaning to post for years and years, hoping for some help on an IDing question.

In Darktown ran sporadically in the New York Evening World from September 12 to December 29 1904*, usually as a panel, sometimes as a strip. It's your typical distasteful stereotyping of blacks, the sort of thing that was quite commonplace in papers of the era. The art on this feature, though, has a certain quality that impresses me. The series was signed with the name "Dalg".

Also by "Dalg", Woman's First Thought is Man ran six times in the period January 13 to March 13 1905 in the same paper. It's nothing greatly memorable as a series -- just strips about how women, supposedly supportive of their men, can be anything but. Been done many times before and many times since. This strip, despite the less than original hook, is written and drawn with an appealing style as well.

These are two of a total of three series, all from late 1904 to mid-1905, carrying the signature "Dalg" (or is it "Salg"?). There are plenty of aspiring cartoonists that came and went not having left us their full names, but in this case, the guy was actually pretty good, and I'd love to credit his full name.

Of "Dalg"s three series, these two were for the New York Evening World, and one was for the Evening Telegram, so he was obviously a New Yorker shopping his wares around. Beyond that I can offer no clues. I can find a few people with the surname Dalgleish popping up in New York City papers at the right time, but none is identified as an artist.

* There was one additional panel using this title, run on January 2 1905, by R.E. Leppert. Since the series does not use continuing characters but just a common theme, hard to say if Leppert piggybacked on the series or just happened to use the same title.

Comments:
Looking at that signature on certain DARKTOWN strips (see link) I'm thinking the initial letter might even be a "P."