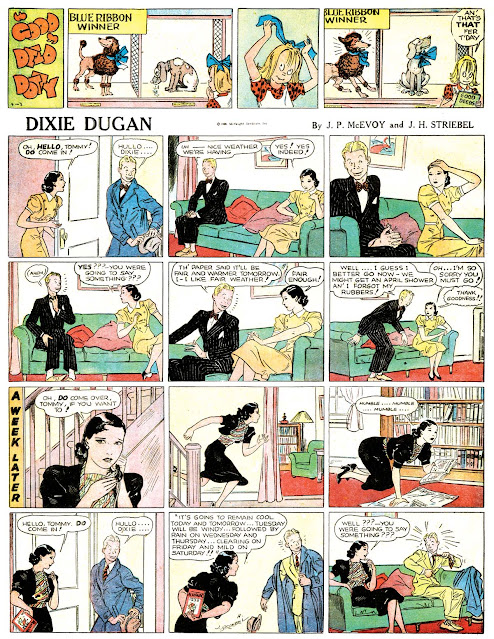 The comic strip Dixie Dugan began in 1929 under the title Showgirl, and, just like the magazine serial and Broadway show from which the name came, it starred a heroine who looked like the breathtakingly beautiful young starlet Louise Brooks. In the beginning, the strip was about a beautiful young would-be star, her forays into the entertainment biz and her many ardent beaus. Art was provided by the team of J.P. McEvoy (writer) and John H. Striebel (art). Both men were holdovers from the original appearance of Showgirl as a magazine serial, which was the source of the Broadway play.

While the well-known creators, the Louise Brooks connection and the media-tie-in sold a lot of papers on the strip, for some reason, maybe the onset of the Great Depression, the strip took a a major change in direction. Dixie lost her showgirl ambitions and concentrated on earning a conventional living, and her looks were toned down so that she was attractive but in a much more girl-next-door style. She became quite family-oriented and earnest, almost to the point of being priggish.

The newly conservative Dixie seemed to be just fine with readers, and a popular Sunday page was added on February 5 1933*. Along with the new Sunday came a one-tier topper strip called "Good Deed" Dotty (yes, complete with self-conscious quotes).

In each strip little girl Dotty searches for some good turn she can do, and when she does one she writes it down in her booklet of, yes, "Good Deeds". Her good deeds are humorous but they are all, indeed, truly good deeds -- the example above is the tone set throughout the series.

The strip was often pantomime, which was a favorite form for John Striebel. Before Dixie Dugan he had a wonderful strip feature titled Pantomime which ran for three years.  That makes me wonder if the topper was his baby, and that McEvoy wasn't involved.

"Good Deed" Dotty was the only topper Dixie Dugan ever had, and it was dropped on October 17 1948**. From then on Dixie had the page to herself.