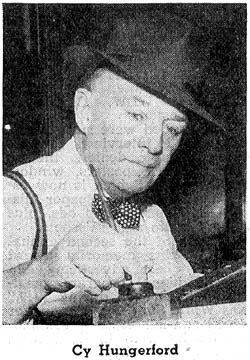 Pittsburgh, Pa.—In his entire life Cartoonist Cy Hungerford has never had to work regular hours. No one in his 40 or so years of graphically satirizing the news has ever asked Cy to come in at a certain time of the day or stay until a certain time. He's been pretty much on his own. Yet, the biggest ogre in his easy-going life is the clock. The art deadline at the Pittsburgh Post-Gazette, where Cy has been a veritable institution for more than 20 years, is 4 p.m.

Does Cy come ripping in at 8 a.m. and roll up his sleeves and whip out a cartoon? Far from it. Cy ambles in with bear-like gait around noon, carefully takes off his coat—never his hat—sits down and squares off for his daily race with the clock. It ends in a dead heat every day.

"This job would be a cinch if the ideas came easily," he says gloomily, for he's lightning fast with the brush and pen.

The truth of the matter is that Cy is one of those peculiar peo­ple who work best under pres­sure. That late afternoon in 1945 when the death of President Roosevelt was announced, Cy was moving into his new home. He carefully put down a Dres­den China figure to answer a call from the office. In 45 min­utes from the time Cy received the call in his home, the Roose­velt death cartoon, reprinted throughout the nation, was in the hands of the engraver.

Without ever attending an ed­itorial conference, Cy turns out cartoons consistent with the pol­icy of the Post-Gazette. The only person who looks at Cy's daily contribution before it goes to the engraver, is the copy boy who dashes up the steps to the third-floor with it. The independence which has marked his life, also carries over to his working habits and he ad­mits that he has used only about a dozen suggestions in the ap­proximately 20,000 cartoons he has turned out. "I don't say that it isn't good to use suggestions. though," he adds. One of his closest friends was the late and talented Sports Edi­tor Havey Boyle who every week or so would come to Cy with a sheet of paper upon which was drawn a rough sketch. "Say, here's a good idea for a cartoon," Havey would say with sober mien. Havey's sketch was always the same one—it showed two hands grasped across the ocean. With equal solemnity, Cy would receive it and swear acknowledgement that it was the best idea he'd ever seen.

Success and recognition have had little or no effect on Cy. He's still "in" to everyone. As a result he takes a pretty steady ear-beating from the crackpots who wander in.

He has kept no records of the honors he received, although the Post-Gazette files show he won the National Headliner Award in 1946 for "consistently outstanding editorial cartoons." Washington & Jefferson College awarded him the honorary de­gree of Doctor of Arts. The Chamber of Commerce cited him for "distinguished service." Accolades are all right, Cy admits, but his greatest concern is turning out a daily cartoon. A recent survey showed that 81% of the readers of the Post-Gazette scrutinized his work daily.

Cyrus Cotton Hungerford was born on a small farm in Manilla, Ind., the only child of Florence J. Gotten and Addison J. Hungerford. Shortly after Cy's birth, the senior Hungerford became a salesman of farming equipment and moved his family to Parkersburg, W. Va. For some un­known reason, Cy began copy­ing cartoons from the New York papers and was encouraged by his family and friends. Before he was 12 Cy was delivering newspapers and haunting the office of the Parkersburg Senti­nel for a chance to do cartoon­ing. His first published cartoon was inspired by a typhus epi­demic, pictured Death floating down the river.

"Original, that," Cy says with a chuckle. He received a dollar for that job and soon was pub­lishing two or three cartoons a week.

He drew directly on chalk-coated steel plates from which he cast his own lead plate. It was through using that old me­dium that Cy developed his un-embellished, strong-line style which has become his trade­mark.

When he was offered $4 a picture, Cy swung over to a news sheet which called itself, appropriately enough, the So­cial Rebel. Only 13 years old, Cy was portraying corruption in the penitentiary and other such subjects. One cartoon clearly libeled a prominent banker and Cy was excused from school one day to appear before a grand jury session. Taking into consideration his years, the judge let Cy off with a lecture on libel and the re­sponsibilities of genius.

Later, he worked on the Wheeling (W. Va.) Register and then came to the old Pittsburgh Sun. The very first cartoon he drew for the Sun was reprinted in the New York Times.

He was a busy man in those days. In addition to his daily political cartoon, he turned out a syndi­cated strip "Snoodles" for about five years during the twenties. [actually he started it in 1913 -- Allan]

Cy is so amiable and easy-go­ing that he immediately disarms people, a fact that has resulted in some amazing experiences in his three trips abroad. In 1937, Cy, with Paul Block, Jr., went to England then in a fizz over the king's coronation. While thousands of Americans were running around London looking desperately for some way to get in on the activities, Cy inadvertently found the situ­ation as easy as walking through Central Park.

"Someone told me that out­siders could see the horses in the Royal stables at Bucking­ham Palace on certain days, so I went around to see them," Cy recalled. There he happened to become a chum of John Pugh, the Royals Coachman. Out of a clear blue sky, Pugh gave Cy two servant tickets to the Coronation Court.

Cy's bald head is never un­covered. He began wearing his hat in the city room after he fell asleep one night and a prankster painted a smiling face on his hairless head. Cy was the only one who couldn't see the point.

Comments:
Yearly collections of Hungerford editorial cartoons came out in at least the 1940s and 1950s; I own two different editions, and I've seen a few others. Curiously, when Hungerford appears in his own cartoons, many times it's without his hat!

What a great story!
I found there was no Wikipedia article about Hungerford so I've written it: http://en.wikipedia.org/wiki/Cyrus_Cotton_%22Cy%22_Hungerford
It would be good if someone could add an example of his work to the page. Keep up the great work, Allan.

I was able to get a pretty long run of the annual Hungerford collections (something like 44-57 if memory serves) the last time I was in Pittsburgh. Found the whole stack of 'em in an antique store. I've never been a big Hungerford fan (some call him minimalist, but sometimes it seems more slapdash to me). Sorry, Lyn, I did scan a cartoon example to go along with this article but somewhere along the way my hard drive ate it for lunch. If it regurgitates it I'll add it to the post.

Sorry, mate: I meant the Wikipedia page needs a graphic (I don't have one to post there). I wasn't lamenting the lack of one in your post, which is just fine as it is!

Hungerford's mom's maiden name and his middle are both Cotton not Gotten. Thought that it might help.
Does anyone know the extent of the Carnegie collection or how to find it?

Thanks, Anon. It was an OCR error. Corrected now.

Is there a market for his late work. I have a comic from 1949 of his best cartoons,
republished by the pittsbergh post gizete.

I own 42 original cartoon drawings by Cy Hungerford, all measuring 16 inches by 20 inches. My father-in-law worked as head photograper at the Pittsburgh Post Gazette at the same time Hungerford was employeed there. Claudine

...i have this image in my mind of a ww2 Hungerford cartoon showing the axis leaders and the devil and quote "the yellow kid is being attacked" ... a very powerful image...does anyone have a copy of this image?

I happened to come across a cartoon Mr Hungerford drew for a patient of mine, He gave it to me as a thank-you for the great care I gave him. I came across it in my photo album. Does anyone know the drawing of cartoon "Jest Before Christmas we're as good ad we Kin be. Thanks

I have somewhat recently completed an inventory of the Hungerford collection for the Carnegie Library of Pittsburgh. There were a total of 2,551 original drawings ranging from WWI through the 70s. I am working on a book of his work. While some may consider it "slapdash", as an historian I consider it a great way to see history through one who lived it.