November 8 1909 -- Another Baron Mooch strip missing from Blackbeard's By George Book 1, this one featuring a cat (more in the Alexander mode than a proto-Krazy, I suppose) having a face-off with Gooseberry Sprig. The Blackbeard book seems to be complete for Mooch strips after this date, so this is our last visit with the Baron on Herriman Saturday. 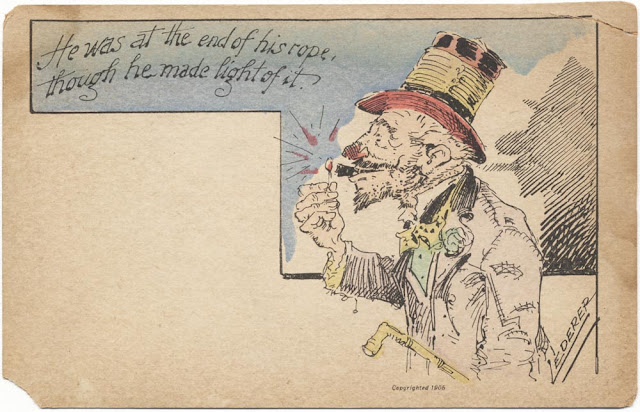 Here's a postcard by Chicago cartoonist Charles Lederer. Although copyrighted in 1905, it was published in 1907 or later because it has a divided back. No maker is credited, but I wouldn't be surprised if it is the Monarch Book Company, which published other Lederer cards and used the same typeface for the copyright line.

For those wondering about the gag, it helps to know that old time slang for a really bad cigar was a "rope".

Comments:
The large white space is obviously to accomodate a message to be written on the face of the card, in keeping with the pre-1907 formulation. So obviously this went into at least two printings. It's pretty ugly, so the gag itself must've made it worth doing. 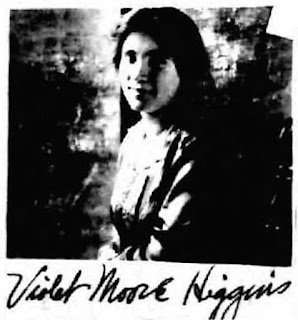 Violet Moore Higgins was born Violet Idelle Moore on November 28, 1886, in Elgin, Illinois according to The Wights: Volume 2 (1977). A Sons of the American Revolution membership application, at Ancestry.com, said her parents were Lindley Briggs Moore and Mary Katherine Banks.

In the 1900 U.S. Federal Census, Higgins and her widow mother resided in Elgin at 154 South Porter Street.

According to the Cook County, Illinois, Marriages Index at Ancestry.com, Higgins married Edward R. Higgins on March 12, 1910. The Wights said he “was born September 26, 1877, San Francisco, California. He was a Captain in the Philippines Constabulary during and after the Spanish-American War. He became a newspaper artist and worked for many years for the N.E.A. division of the Scripps-Howard chain. …”


She met her husband, the late Edward Roberts Higgins, while studying designing at the Academy of Fine Arts in Chicago. Mr. Higgins was sharing a room in the city with Frank King, creator, to be, of Gasoline Alley. Both were reporters on the Chicago Examiner at the time. They were married in Chicago and then Mr. Higgins went on to become art and photography director with the Scripps-Howard newspapers and later with the New York bureau of NEA feature service.


In the 1910 census, the newlyweds and Higgin’s mother lived in Chicago, at 3528 West Van Buren Street. He was a newspaper artist and she an artist.

At some point they moved to Cleveland, Ohio. The Riverdale Press said she “gave up her proposed teaching career for illustration work and did some feature writing for a Cleveland society magazine.”

American Newspaper Comics (2012) said Higgins’ series, Mister Reelumup the Movie Man, ran from September 19 to October 31, 1915 and was distributed by the Chicago Herald/J. Keeley Syndicate. For the McClure Syndicate she produced Nursery Rhymes, from January to June 1919, and Picture Puzzle Mystery Rhymes, from August 3, 1913 to August 12, 1916.

In 1920 the couple lived in Cleveland at 3518 Prospect Avenue. Their occupation was newspaper artists. They soon moved to New York City where their son, Lindley, was born on October 17, 1922.

The 1925 New York state census recorded Higgins, her husband, son and mother in the Bronx at 5663 Newton Avenue.

In 1930 the Higgins lived in the Bronx, New York at 5661 Post Road. She was an illustrator while her husband was a commercial artist. Their son was seven years old.

The couple worked together on at least one project, The Three Musketeers, which was edited by her and illustrated by him. It was published by the John C. Winston Company in 1931.

The Higgins’ address was the same in the 1940 census.


Mrs. Violet Moore Higgins, a retired newspaper artist and children’s book illustrator, died Friday at Montefiore Hospital in the Bronx after a long illness. She was 80 years old and lived at 5661 Post Road, the Bronx. She saw the widow of Edward R. Higgins, also an artist.

Mrs. Higgins, a native of Elgin, Ill., created the comic strip known as “Drowsy Dick,” which ran in the New York World in the 1920's. She drew a two-column children’s feature called “Junior Editors” for the Associated Press from 1954 until her retirement in 1963.

She was the illustrator for a number of children’s books, including “Heidi” and “Hans Brinker” and she wrote and illustrated “The Real Story of a Real Doll.”


Higgins was laid to rest at the Long Island National Cemetery. 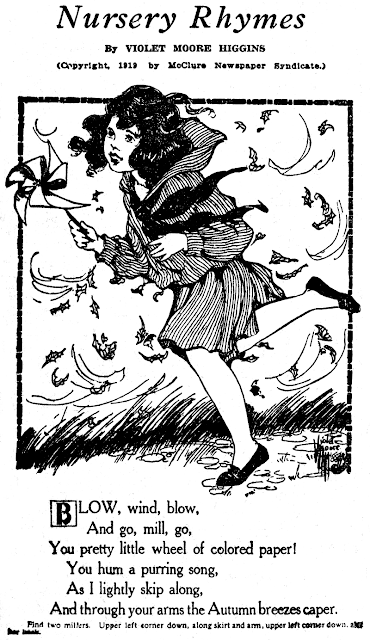 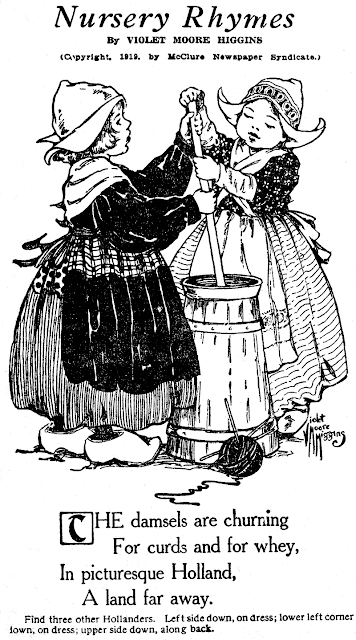 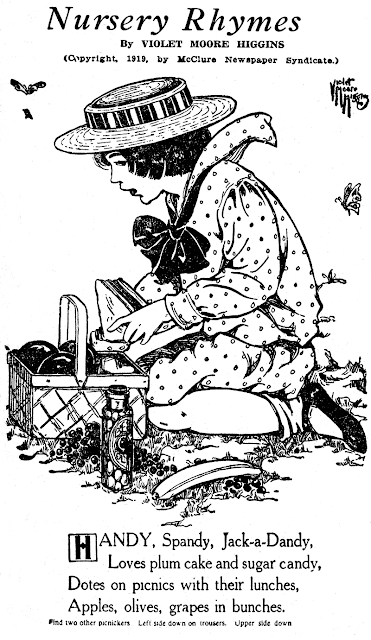 Violet Moore Higgins created illustrations of exquisite beauty and was in great demand as a childrens book and magazine illustrator. That she ever made time for us newspaper folk is a favor for which we should be thankful. We've already covered her much later series, Drowsy Dick, here on the blog.

Today we'll discuss her earliest known series, titled Picture Puzzle Nursery Rhymes. It debuted as a weekly panel feature on August 3 1913*, distributed by the McClure Syndicate (not the Boston Globe as reported elsewhere on the interwebs -- they were merely a client).

Those who are familiar with our rules here at Stripper's Guide are undoubtedly aghast. Yes, we are covering a newspaper series that is in the activity/puzzle genre, which we say we won't do. (Notice how I pull out that royal we when I'm making excuses?). My unassailable argument is that Higgins' work is so gorgeous that it keeps me from thinking straight. So there.

So anyway, the feature offered not only a gorgeous illustration and a delightful original nursery rhyme, but a hidden picture search feature as well. In our samples above you'll find a key to finding the hidden faces (they were usually faces) in the small print underneath. Most newspapers ran the solution elsewhere in the paper, but this particular one was so lazy they undercut the whole point by stating right in the panel where the hidden faces were! Sheesh.

Picture Puzzle Nursery Rhymes never had a huge client list, but it could be found in many of the most lucrative big city papers. From that I'm guessing that McClure asked a premium price for this feature, which seems like a smart marketing move.

Drawing hidden picture illustrations for newspaper reproduction is a tough and thankless task. You can't do anything that depends on detailed linework, because newspapers are notorious for bad printing quality. I imagine that Higgins finally burned out from her weekly deadlines, and the feature was pulled after three years, the last installment appearing August 12 1916**.

McClure evidently felt the loss of this feature, because three years later they offered the Higgins material again, in reprints, under the simpler title Nursery Rhymes***. This time it was offered as a daily, which a little math tells us would give them a mere six months worth of daily material to offer from the old weekly series. This offering found few takers. The samples above are from this reprint series.

McClure finally got one additional use from the material in the late 1920s, when they sold it off to an unknown syndicate. That syndicate is known to have offered the feature in 1928-30 at least. The Southtown Economist ran it then under the unimaginative title Find the Faces.


* Source: Chicago Record-Herald
** Source: Brooklyn Eagle
*** I mistakenly cited this as a new series in my book, however with the benefit of digital archives I have determined that the material is reprinted from the old series.

The 1910 U.S. Federal Census recorded MacArthur and his parents in Chicago, Illinois, at 650 North Albany Avenue. His father worked with sheet metal.

In the 1920 census, MacArthur was naturalized and a department store clerk. His parents had an adopted son who was five years older than MacArthur. They resided in Leyden, Illinois, at 2710 Harlem Avenue.

MacArthur has not yet been found in the 1930 census. Regarding his art training, MacArthur may have studied at the Art Institute of Chicago or the Chicago Academy of Fine Art.

According to the 1940 census, MacArthur was married and had a twelve-year-old son, William Jr. The family tree said his wife was Cecilia Duzynski. The trio lived in Chicago at 6244 Wabansia Avenue. MacArthur was an artist in the publishing industry.

At some point MacArthur moved to California. A 1950 Los Angeles city directory listed MacArthur, an artist, at 71 La Sierra Drive, Arcadia, California. The 1952 directory had the same address and his employer was the LA Mirror.

American Newspaper Comics (2012) said MacArthur drew the strip The Life of General Ike for the Mirror Enterprises Syndicate. General Ike ran from May 19 to June 28, 1952. 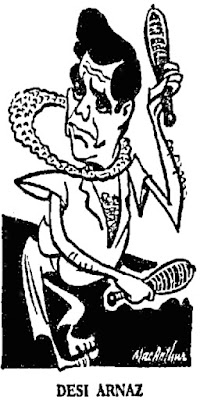 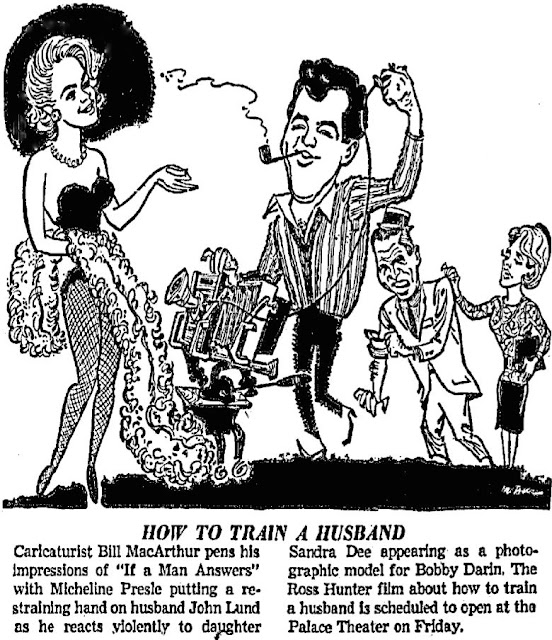 The paintings of Mr. and Mrs. William MacArthur are being exhibited at the Untied California Bank, San Clemente.

These and other works will be exhibited at the Arts-Crafts Fair Aug. 21 and 22 from 10 a.m. to 5 p.m. at San Clemente Community Clubhouse. No admission will be charged. 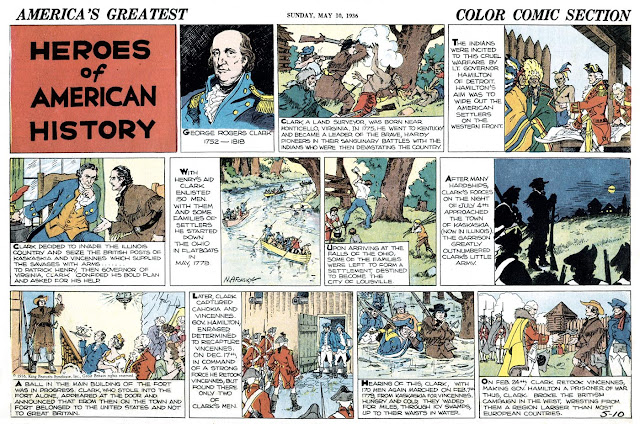