December 21 1909 -- A one-shot strip from Herriman in which a black man gets a beating for agreeing that Jack Johnson is going to clean Jim Jeffries' clock. The most charitable thing I can say about this is that we could choose to believe that Herriman was helpfully reminding black folk to be careful of being too exuberant in their excitement about Johnson in mixed company. As if they really needed a reminder.

The last panel offered a word new to me, which turns out to be yet another offensive term for a black person. 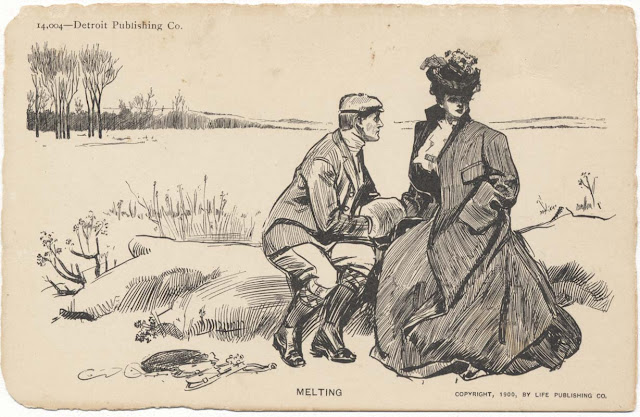 Here's another Gibson card from Detroit Publishing. This one is #14004, and based on the copyright we know that it originally appeared in a 1900 issue of Life. What we don't know is why an unused postcard like this one is all chewed up around the edges.

Obscurity of the Day: Gummi Bears

As an example of bizarrely successful cross-promotion, Gummi Bears is a master's class on crass commercialism and rapacious capitalism. Supposedly it all began when Disney head honcho Michael Eisner noticed his kid eating Gummy Bears candies (note the spelling difference). For some strange reason he decided that the company should turn these squishy, rubbery, tooth-rotting candies into Disney's first foray into TV animation. I'm betting that part of that 'inspiration' was also the success of American Greetings' Care Bears characters. Kudos Disney for piggybacking your new product on the backs of a candy franchise and a greeting card company, yet no pesky licensing fees to pay --- score!

So was born Adventures of the Gummi Bears, a cartoon show set in medieval times and starring a group of bears who, after drinking magic juice, are able to bounce around not unlike Tigger. The plot sounds utterly inane to me, but I've come across plenty of fandom in my little bit of research on the subject, so I gather the cartoons were not completely and utterly without redeeming value.

So once you've created your mildly successful TV kid's show based on candy and greeting cards, what's next? Well, a newspaper comic strip series, of course. But whatever tiny amount of charm and thought might have gone into the animated series, it failed to reach from one division of the company to the next. The Gummi Bears comic strip, which debuted via partnership with King Features Syndicate on September 1 1986, offered incredibly lame one-liner jokes in the dailies, and the Sunday did the same plus added attractions of  a "Bear Fact" (pre-school level trivia), and a couple of puzzles or games. None of it exhibited an ounce of creative thought, and managed to annoy even fans of the Gummi Bears by ignoring most of the characters and plotlines set up in the TV show.

The creators of this waste of space, which thankfully found few clients, were probably very happy to be uncredited and anonymous. That is, they would be anonymous if it weren't for Disney researcher extraordinaire Alberto Becattini, who unmasked them as Rick Hoover (writer) and Lee Nordling (art).

The Gummi Bears TV show lasted until 1991, but the comic strip was such a stinker that it fell by the wayside on April 1 1989, a fitting end date for a feature that was a practical joke on the newspaper-reading public.

Comments:
A little credit for mixing up the Sunday page a little, even if they were hardly the first (flashing back to old full-page funnies, especially Popeye with his cutout novelties and Cartoon Club). "Teenage Mutant Ninja Turtles" had a similar feature, likewise geared to the youngest readers.

"The Simpsons" version was slicker and tuned to the show's sensibilities. That appeared to come and go equally quickly, perhaps because they weren't sure whether it was a kid feature or an adult parody.

"Slylock Fox and Comics for Kids" appears to be the hardiest survivor, unless there are others I don't know about.

There is a bunch of the strip posted as a pdf by a fan blog. Thanks for the start/end dare so we can finally update the Disney Comics Wikipedia page.

The cartoon series (and the characters I guess) were co-designed by Daan Jippes when he worked there. Was Lee Nordling related to form Eisner assistant and Barker artist Klaus in any way? 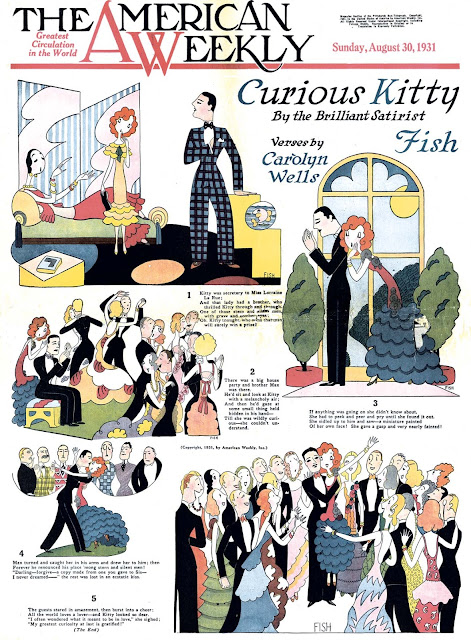 Carolyn Wells and Fish were both tremendous talents, but I think Wells was a better artist than she was a versifier, and Fish was a better writer than she was an artist. So what does the American Weekly do but put the two together and assign each the role in which they're weaker.

Curious Kitty is a pretty forgettable cover series that ran in the American Weekly from June 28 to August 30 1931. The plot is that Kitty keeps getting in trouble because of her insatiable curiosity, until the final installment ... well, go ahead and read it yourself, because our sample is the concluding episode of the saga. All's well that ends well. 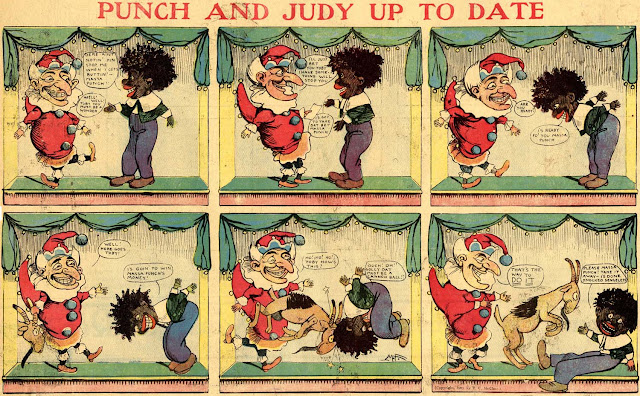 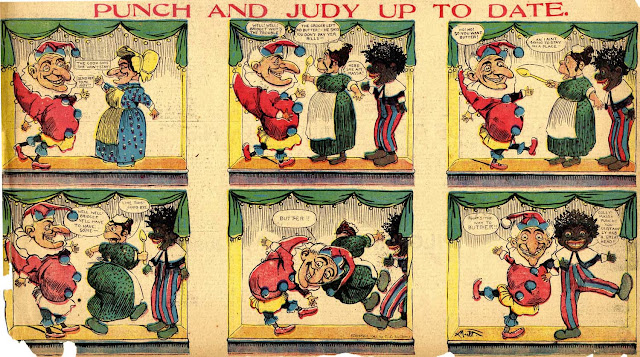 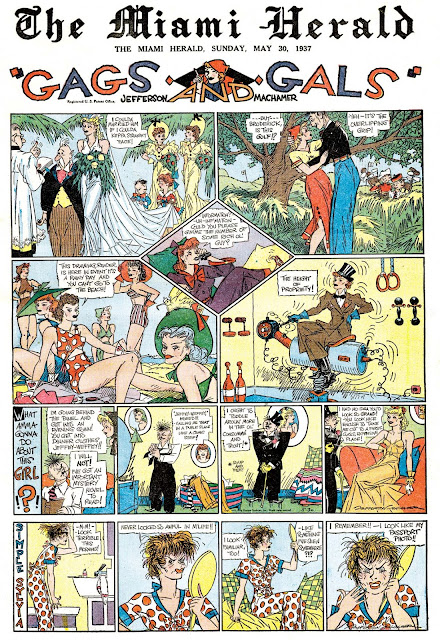