Sunday, March 1 1908 -- Two days left before the big fight between Battling Nelson and Jimmy Britt. The cartoon forecasts that the winner will go on to bigger and better bouts while the loser will be relegated to obscurity. And you know what? Herriman is exactly right. The winner went on to a long boxing career, while the loser got out of the sport after a few more bouts.

Obscurity of the Day: Living in Lonesomehurst 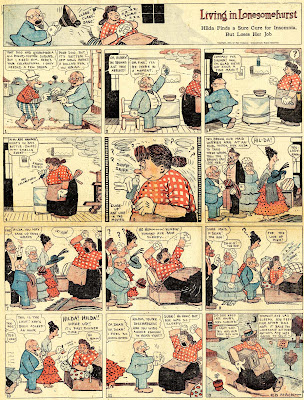 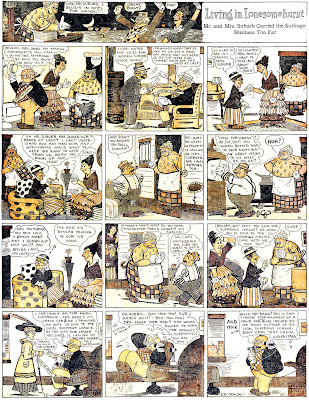 Ed Mack, who we've met before through an Alex Jay bio on the blog, parlayed a relatively minor position in the Hearst cartooning pantheon into a job ghosting Bud Fisher's Mutt & Jeff. We can debate the wisdom of Mack's career move, but you can't really blame him for giving up on Hearst. Mack seemed to always pull assignments that were guaranteed to foster his obscurity.

Here's one of Mack's last assignments for Hearst, Living in Lonesomehurst. Mack may have already been working for Fisher when he did this strip, and the feature shows that Mack didn't have a whole lot of heart in his work. The plot is one that was pretty popular in the teens; a chronicle of a family that moves to the suburbs. In the 1910s the city folks thought these new suburbanites were completely nuts -- they were half-certain that dingoes would eat their babies out there in that newly platted wilderness. One point of interest in the first example above is that Mack trots out his character Hilda, who had her own Sunday strip back in 1914, for a cameo in the new feature.

Living in Lonesomehurst was a Sunday feature of Hearst's Newspaper Feature Service, which was the company's least successful syndication offering at the time. The syndicate began with the idea of selling a sort of boilerplate Sunday section, a la McClure, just as that business model was circling the drain. By 1916, when Living in Lonesomehurst premiered, few papers were interested in taking a complete section of lesser Hearst products, and even fewer editors were soft enough in the head to choose Living in Lonesomehurst on its own merits.  Therefore samples of this strip are scarce enough that I can't supply a start date; my earliest sample is from mid-June. The end date, if my run in the Springfield (IL) Leader is to be trusted, is October 8 1916.

Comments:
I like how in the top strip's fifth panel it says, "'Close up' just like in the movies"

It sure would. The Oxford English Dictionary's earliest recorded usage was 1913.

William Leigh Ridgewell was born in Brighton, England on September 8, 1881, according to Who's Who in Art (1927). He was the son of F.W. Ridgewell, a commercial traveller, and educated at Brighton Grammar School, and Brighton School of Art. He was a humorous artist, formerly lithographer, seal engraver and commercial artist.
During World War I he served in India from 1914 to 1919. In his spare time, he drew for various Indian publications and took part in the advertising of the Indian War Loan.

His work was exhibited at King Edward's Hospital Fund, and in a 1926 exhibition of humorous art. His art was published in Punch and George Newnes' publications.
According to The United States Catalog: Books in Print (1928), his illustrations for Harry Graham's More Ruthless Rhymes were published in 1928.

Ridgewell was married to Dorothy Forrester. His recreations included tennis, walking, and boating. He resided at 2 Addison Road, Brighton. He passed away in 1937, according to Dictionary of British Artists Working 1900-1950 (1976).
The U.S. Federal Census and passenger ship lists at Ancestry.com have no record of Ridgewell visiting America.

Obscurity of the Day: Everybody 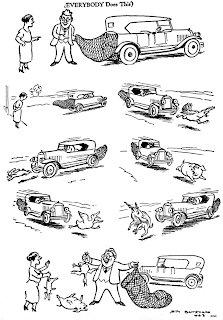 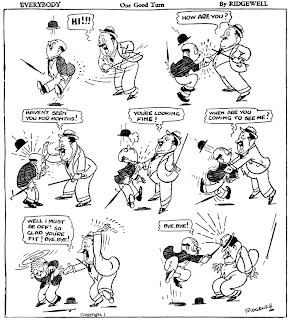 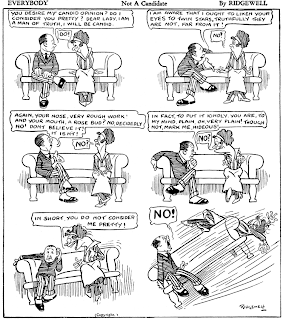 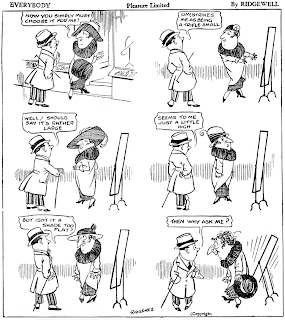 Everybody was distributed by Bell Syndicate probably starting in 1924 (Cole Johnson says he has seen examples as early as March of that year), and the latest were seen by Dave Strickler in the San Francisco Daily Herald, where the series ends on May 29. So there's a whopping three months of production that we know of. Did it run longer? Well, that seems like a chance, because Bell Syndicate either sold the series to a reprint syndicate or was selling it in reprints itself much later. The only place I've laid my own peepers on the strip is in the Philadelphia Sunday Dispatch, where it ran in 1929. It seems doubtful that you would bother to resurrect and reprint a series that only ran three months. But maybe the cachet of the creator(s) made it worthwhile.

The strip was credited to William Ridgewell, who was a British cartoonist of some note. The British sensibility is quite evident in the strip, and my guess is that Everybody was either composed of cartoons already printed in Punch, Tit-Bits and the like, or were rejects from the British magazines.

Now here's the oddball thing. Although the strip was credited to Ridgewell, in my Dispatch samples I have a few strips drawn and signed by another noted British cartoonist, H.M. Bateman. Neither Johnson or Strickler noted this in their perusals of the series, so maybe the Bateman cartoons were added to the reprint run to bulk it up some -- I dunno. But somehow, Everybody became a team effort among those two leading lights of British magazine cartooning.

Hi folks! I've been off on my honeymoon with Mrs. Stripper, drinking in the wonderfulness of Costa Rica ... not to mention the wonderfulness of Mrs. Stripper. Alex Jay was kind enough to take on the task of entertaining and enlightening the masses here on the blog, for which I thank him most heartily. I hope you all enjoyed his posts last month. They are a product of a whole different style of research than mine, and he uncovers amazing and interesting information that is completely beyond my abilities to gather.

I was supposed to be back at the helm on April Fools Day, but computer problems intervened. I was once again attacked by a very nasty virus, pretty much the minute I got home from the trip and turned on the computer. It's an evolution of a virus I had before and thought I'd conquered with a System Restore, extensive manual cleaning, and disinfection tools. Turns out it was just lying low and cooking up nasty new ways to take over my machine. This time I went through four different disinfection applications trying to flush it out. Every one of them found things and claimed to have disinfected the machine -- every one of them was fooling itself.

I finally gave up on disinfecting that machine, and have spent the last week loading all my stuff onto a new machine. This after finding out the hard way that my hotsy-totsy ShadowProtect Backup didn't quite live up to its marketing in regard to being able to move all your stuff onto a new machine and configure everything automatically. The hype turned out to be just that. Ended up moving all my data and installing my apps manually.

For the record, and just in case you encounter the same thing, I believe the virus (or Trojan, to be more accurate) came in through a faked message notifying me to update my Adobe Flash Player. At first I thought Adobe was actually at fault for allowing a Trojan to piggyback on an Adobe update, but I realize now that I was taken in by a completely bogus update message. For goodness sake, if you see such a window pop up on your computer, don't click on it; even to say "Don't Install"! Go into your Task Manager and kill the process.

For the record, Ad-Aware was active on the machine and didn't block it in the first place, and once the Trojan was resident, it could not be completely wiped off by Ad-Aware, Spybot, Kaspersky, BitDefender or Avast; though every one of them found the intruder and thought they'd squashed it.

So the upshot is that I'm on a new machine, and I've pretty much got everything I need transferred over now. After much research, I'm going with Kaspersky as my active antivirus tool, and also have installed NoScript on Firefox as additional protection. I hope that combo will keep the intruder from attacking me again on this clean new machine.

Probably tomorrow I'll do a 'real' post and try to get back in the groove. See you then ... I hope!

Comments:
Hello Allan---I'm so glad you had a fun honeymoon,and we all missed you. This computer business always such a pain in the gluteus. There's ALWAYS something weird going on. My sister is trying to get me to buy a new Mac. She says there's never any problems with one--no viruses, trojans, sunspots or interference from Castro jamming the signal. What would you suggest?---

Hi Cole --
Macs can and do get viruses and trojans, but they are pretty rare in comparison to PCs.

The problem with Macs, from my perspective, is that there are very few apps available by comparison to Windows, and both hardware and software tend to be quite pricey in comparison to PCs. However, if you aren't a real serious user doing business on your machine, like I am, Macs are a pretty good choice, especially from the standpoint of avoiding trouble and working with a generally simpler, easier to understand interface.

That's my two cents on the very touchy Mac vs. PC debate.