Victories and Defeats (Mostly the Latter)

So here we are at the Library of Congress. Been working for two days and have made some progress on some of those pesky question marks in the Stripper's Guide listings.

But the real reason I'm here is, as I said, to scan the comics of the Amsterdam News bound volumes. It took a day and a half of in-person arm twisting to get the first of those bound volumes -- the way they protect them you would never guess that they spent the last thirty years or so tossing bound volumes in the dumpster. Finally, though, after explaining to seemingly every employee of the library that we really, honesty, truly do need to work with the bound volumes, not the microfilm or the digitized simulacrum of that microfilm they gave in.

The first bound volumes of the Amsterdam News (1942, they have nothing earlier) are in beautiful condition. They were restored and rebound using a very fancy and expensive German process where they actually shave the pages in two (an amazing accomplishment if I do say) and then affix each side of the pages onto thick backing paper. I have to mention that the paper they affix it to looks to me to be very acidic (you can see the wood chips in it) so I can't see how this process isn't going to backfire on them bigtime in short order.

Since we had such fantastic source material to work with I had very high hopes for the scanning. As you read in the previous post my new PlanOn wand scanner is pretty much the only game in town and I knew when I bought it that the reviews were definitely not complimentary. But beggars can't be choosers, so I bought it and hoped that its shortcomings wouldn't cause me too many problems.

Fat chance. Everything about the PlanOn scanner and its software is rinky-dink crap. How do I hate thee -- let me count the ways:

* the stupid thing is CONSTANTLY turning itself off. You're lucky if it will stay on long enough to complete a scan.

* the settings just love to revert to their defaults constantly. Since the defaults are pretty much exactly opposite of what I'm trying to do, if I don't keep a watch on it I end up with a bunch of useless scans.

* the memory that they load in the thing is beyond ridiculous. The scanner as you buy it can only hold 5 Mb of data, which of course gets you barely one 400 dpi scan. I immediately added a 1 Gb micro-SD card to take care of that problem. But at $300 they couldn't have included this standard?

* the software is pathetic. Although it gives every impression of handling multiple scans in a reasonable manner, I found out today that there is no way to just get it to save off all the stored scans on the unit. You have to do it one image at a time. Great fun when you've made 40 or 50 scans.

* in order to even review the scans you've made, you have to download them from the unit with the software. That process takes an absolutely insane amount of time. For 20 scans (the most I attempted between downloads) the process took half an hour. That's half an hour of downtime when I could accomplish nothing. And don't forget, now you still have to individually save each image after that. If that weren't enough, then you will want to clear the images off the scanner memory. That's another 5 minutes or so.

* ... and I would gladly put up with all that crap to get the good scans I was hoping for. Keep in mind that this paper is available on microfilm (but the photography is crappy) and digitized on ProQuest (unfortunately they used the microfilm as their source, so the quality is the same). So I was looking for good clean scans that would be suitable for reproduction in a book. The PlanOn scanner claims a maximum resolution of 400 dpi -- not tremendous, but not bad. And here's the rub. The scans I made today at 400 dpi are indeed 400 dpi, but the actual physical resolution of that scanner cannot possibly be 400 dpi. 200 dpi maybe, but not 400. The scans have to be made in color (their grayscale mode is just awful) and they all come out shifted way over to the red. They have a calibration utility that I thought might have been needed to be run, but it claimed that the calibration was already in good shape. Once I took the scans over into Photoshop, switched them to grayscale and played with the levels the line art is undeniably blocky -- no way that is really 400 dpi. Here's a sample where Ollie Harrington's delicate grease-pencil shading has been turned into a composition of blocks. Take my word that the reproduction in the newspaper was in fine shape, and my flatbed scanner would have had no trouble at all with this: 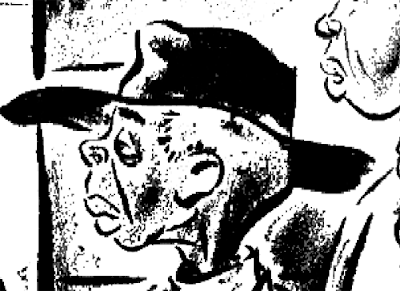 I would be ashamed of putting something of this quality in a book, and I imagine Harrington would be spinning in his grave. If I was willing to settle for this quality I could probably get this good (or pretty close) off the microfilm or digitized versions.

Comments:
What a big fat downer. I feel digusted myself just having to read your frustration. You'd think there would be another product on the market that would do a better job, although no doubt you checked it out. So, what do you do if the scans are too shameful, as you say, to put into a book?

When I scan from I bound paper, I have to turn my flatbed scanner upside down... a very laboreous process as well. Good luck.