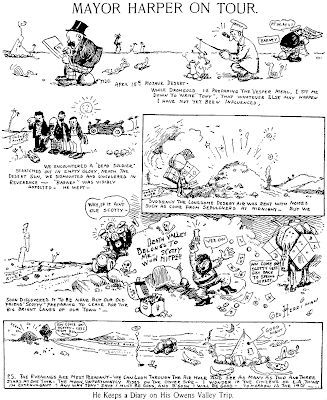 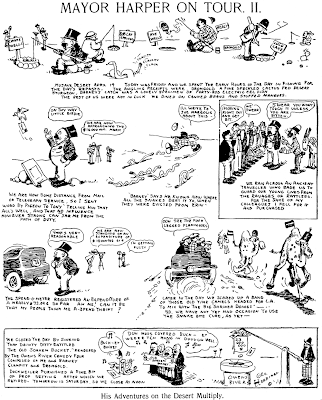 I'm back in the saddle again, with a nice new power supply humming along happily at the service of the blog. So now, we belatedly arrive at Herriman's second continuing comic strip done for the Examiner, Mayor Harper On Tour.

Los Angeles had a long-standing problem supplying water to its rapidly growing population. Most of the nearby sources had been tapped by 1907, and the city was getting desperate to find new sources of the elixir of life. The Owens River up in the Sierras some 200 miles from Los Angeles had long been considered as the most likely answer to all the city's needs. In April 1907 Mayor Harper along with a number of city council members made a pilgrimage to see the area for themselves. Although lip service was paid to scouting other possibilities (as will be seen in upcoming episodes) the trip was really just an excuse for a junket of cronies to have a little adventure and be wined and dined by many landholders who saw dollar signs in selling their plots to Los Angeles.

Although I haven't been able to figure out the identities of everyone mentioned in the strips, here's a key to those I have figured out:

I haven't been able to further ID Joe Margolis, or "Scotty".

The first two episodes of Mayor Harper On Tour appeared on April 19 and 20 1907.

Comments:
It's possible - maybe even probable - that "Scotty" refers to Walter Scott, aka "Death Valley Scotty", who was a noted publicity seeker and con-man, who was quite well known at the time.

I'd say you hit the nail on the head, Brent! Thanks for the info, and here's a page about Scotty:

I have a few obscurity strips I would like to submit to you. Is it possible for you to contact me by email so I can send you pictures of them.

Andre -
My email address is listed on the left sidebar of this page.