Today Cole Johnson gets the bully pulpit to talk about old time super-collector Ernie McGee. If Cole is less than charitable, the important thing to keep in mind is that I didn't say it! In truth, I'm sure I speak for both myself and Cole when I say that although McGee was definitely a quirky fellow, well, isn't anyone who hoards old newspapers like we do? Huzzahs to Ernie for being the great individualist that he was! Okay, take it away Cole ...

Back in the 50's and 60's, Ernie McGee was considered the go-to guy as far as comic strip history was concerned, primarily because of the size of his collection. As a largely unresearched wilderness, anything McGee said was held in high regard. A couple instances where McGee was a fibber: He told people he was contributing to Philadelphia syndicates and especially the World Color Printing company, circa World War I. Gordon Campbell made a print for me of a 1915 Slim Jim episode, where, sho' nuff', there was McGee's signature. It wasn't too much later, that I picked up another 1915 Slim Jim section in the flesh, again, signed by Ernie -- in ball-point pen!

Another little monkey wrench he tossed, appearing in a few out-dated references, was a mysterious early strip called Hard-Head Harry, cited as if it had some vague importance. When? Where? What? Having come into possession of some of McGee's stuff, it turns out to be something that appeared in a newsletter for paperboys, circa 1930! ("Harry" is a careless dolt who provides a negative example on his paper route! ) McGee's basic cartooning career was apparently a vaudeville lightning sketch artist. He really was a poor cartoonist, as shown by these two blotters he did in 1928 and '29, for his agent. By the mid-30's, he was doing his chalk-talk act for a night club in New Jersey. 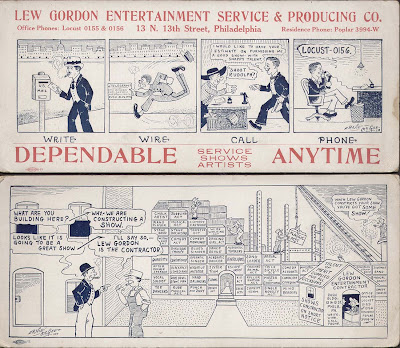 Maybe other comic-section collectors have encountered this strange, cryptic writing. This is Ernie McGee, who must have blown out several cartons of #2 pencils scribbling obvious, unnecessary annotations on his collection.

(On a Happy Hooligan, "By F.Opper", on a Slim Jim, "World Color Printing Co.") Once I saw a very rare 1902 Morgen Journal section, on which he decided to translate every word balloon back into English--IN PEN!

A fellow I knew once visited him in the late 60's. He had moved his collection from Philadelphia to a tumbledown structure in a scary part of Gloucester, N.J. McGee was alone now, drinking too much, with not much more than bound volumes in the place. He had a bunch of chairs set up to a lectern, where he stood in a shabby bathrobe and pretended to deliver a talk on comics to his single member audience. His favorite strips were Slim Jim and Marriner's strips. Here's a tracing-paper drawing he did in the 1950's. 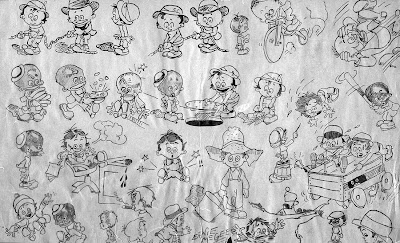 And here's a few shots from a photo-essay article about Ernie McGee that was printed in the Cincinnati Enquirer on October 20, 1957. 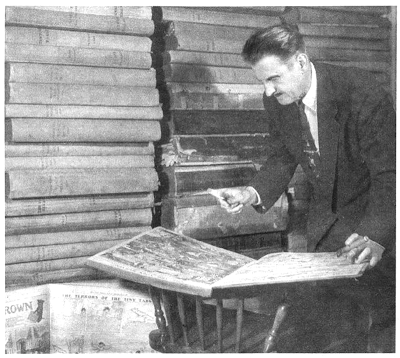 Comments:
Ernie was a Great-Great Uncle of mine. I found your site via a Bing Search! I never knew him. Are you saying he never actually drew any cartoons?

His Dad was my Great Grandfather Will. Will had 16 children and Ralph was my GrandFather.

Sure he drew. He just doesn't seem to have actually earned some of the various newspaper cartooning credits he occasionally claimed for himself.

I bought the remainder of the McGee estate in 2002, was it true a fire took his grand collection of Bound cartoons? I have several proofs from the photo shoot that has him in various poses with these just tremendous stacks of the volumes , we have the charcoal sketches that were stored inside newspapers from 1938 he was quite a fan of Betty Boop and Felix the cat and the Gumps and a great deal of fliers from his vaudeville act(s)