Roland Jack Scott was born in Indianapolis, Indiana on September 1, 1886. He was the son of John and Mary E. Scott. In the 1900 U.S. Federal Census the family lived at 309 Bright Street, in Indianapolis. They were joined by Mary's sister, Anna Bussey, and her mother, Beulah A. Bussey.
Scott's early cartooning career was covered on page 142 of the book, Indiana's Laughmakers: The Story of Over 400 Hoosiers: Actors, Cartoonists, Writers, and Others (PennUltimate Press, 1990).

Roland J. Scott's humorous art appeared frequently in The Indianapolis Sentinel in the early 1900's. Not only did he draw front-page political cartoons, but he also frequently tried his hand at humorous sketches of the various sporting events of that day in the Hoosier capital On Sundays, the Sentinel featured his comic strip, Mr. Lose Out.
He studied with George Frink, staff artist of The Chicago Daily News. Early in his career he was employed by the Indiana Illustrating Company for a year. Following that, he worked briefly for The Anderson Herald and the Chicago Daily News before coming to the Sentinel.

Two sources were identified: "Newspaper Artists and Their Work the Public Seldom Sees," Sunday Journal, Indianapolis, Dec. 13, 1903, part 3, p. 1; and the Indianapolis Sentinel, Jan. & Feb. 1908 (cartoons).
According to Scott's World War I draft card (signed on June 5, 1917), he was a cartoonist at the Cleveland Leader. He was described as "tall and stout" with "blue eyes and brown hair".
In 1920 Scott, his wife, Minnie, and son, Laird, lived on Hawtree Avenue in Howard Beach, Queens, New York City. (Hawtree Avenue was renamed 99th Street.) Scott's occupation was listed as artist at a film company. 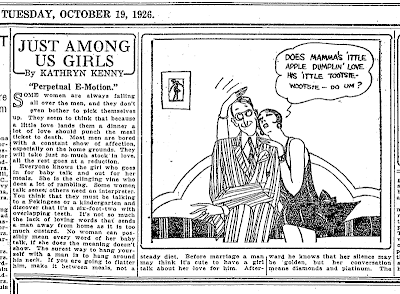 1926 was a particularly productive time for Scott. His panel, Sally's Sallies, began in mid-April in the Seattle Daily Times. In the same paper, his illustrations for the column, Just Among Us Girls, appeared as space allowed. The earliest one appeared on May 4 (signed RJS), and then somewhat regularly beginning in mid-October.
In 1930, the Scotts lived at 4031 West 163 Street in Cleveland. He was listed as an artist for a newspaper. According to the census, Scott married when he was 28 years old (1914).
Syracuse University (library.syr.edu/digital/guides/s/scott_r.htm) has Scott's obituary from the Arizona Republic, April 6, 1968.

Originally from Indianapolis, Scott began his cartooning career with the Indianapolis Star circa 1900. In 1921 he made his way west to Phoenix where he worked as a cartoonist for The Arizona Republican (later renamed The Arizona Republic). After stints with papers in New York and Cleveland, Scott eventually signed with King Features Syndicate in 1931. He returned to Arizona the following year where he remained producing his syndicated panels until his retirement in July of 1967. R. J. Scott died April 4, 1968 at the age of 81.

Allan's two cents: First of all, a big thanks to Alex Jay for researching and penning this bio of R. J. Scott.  A few notes from me:
# posted by Allan Holtz @ 8:01 AM

Thanks for the posting on R.J. Scott. He's a cartoonist I've really wondered about. Now I have a lot more of his story.

I have a poor copy of Mr. Lose-Out, made from a microfilm of the Indianapolis Sentinel. From the title and the one example I have of the strip, I would guess that Mr. Lose-Out was one of those one-joke strips from the early days of comics. I can send you a copy if you suggest a way.

Hi Terence --
Most copies made from microfilm are pretty horrific, so I'm prepared for the worst. I would very much like an example -- can you scan, or is snail mail more your style? Of course I'd be happy to reimburse your expenses. You can contact me privately at stripper@rtsco.com to iron out the details.

Thank you for the post about R. J. Scott. He was my great grandfather. I showed this post to my 5 year old daughter to inspire her. She is now very excited to take an after school art class after seeing her great great grandfather's work on the web. Thank you. Allie