George Willard French was born in Buchanan, Michigan on November 6, 1883, according to this World War I and II draft cards. In the 1900 U.S. Federal Census, he was the second of three children born to Willard and Ella; they lived in Bertrand, Michigan. Nothing is known, at this time, about French's art training. He was a cartoonist with the Chicago American. The Elkhart Truth (Indiana) reprinted his Chicago American drawing of stage actor Richard Carle on January 20, 1909. 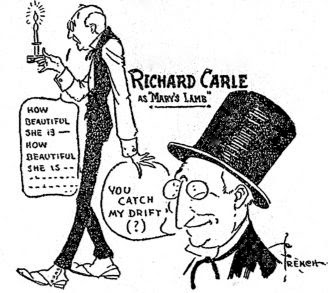 In 1910 French lived in Chicago, Illinois at 6555 South Park Avenue; he was married to Pauline and had two daughters aged three and 7 months. He was an artist for a newspaper. Around this time he did an illustration of the magician Thurston for the Chicago American. French took over Pete Llanuza's sports editorial panel on October 30, 1911 and changed it to a general humor panel with an occasional sports cartoon. The panel was titled Anxious Moments about half the time, while the rest used one-shot titles. The title was used occasionally in his editorial cartoons; he was "promoted" to editorial cartoonist of the Record-Herald on March 2, 1913.

The January 1913 issue of Popular Mechanics published a Cartoons ad which highlighted an article by French who gives "an explanation of the origin of his Anxious Moments cartoon series." The trade journal, Printers' Ink, published this item on May 31, 1917, "George W. French, formerly a cartoonist on the Chicago Record-Herald, has joined the Ostenrieder Advertising Corporation of Chicago."

French signed his World War I draft card on September 12, 1918. He lived at 7701 South Morgan Street in Chicago, and was a self-employed advertising designer, with an office at the Kimball Building in Chicago. His description was short height, medium build with gray eyes and gray-brown hair.

The 1920 census recorded the French family at the same address as his draft card. He was a commercial artist in the newspaper industry, and had a successful career in advertising. The trade journal, Printed Salesmanship, in its June 1929 issue, published his article, "Why Pillsbury Uses the Glorified Cartoon to Sell Pancake Flour". He explained why cartoons are an effective selling tool. The journal included this brief bio:

George W. French, the free-lance artist who created the "Ernest McGroucher" series for Pillsbury's pancake flour advertising, was a cartoonist on the staff of the Chicago Record-Herald prior to his entry into the commercial art field.

MagazineArt.org has one of his Pillsbury's Pancake Flour ads.

According to the 1930 census, French had remarried; her name was Hazel. It's not known what happened to his first wife. The family lived in Chicago at 440 Barry Avenue. He was a commercial artist. French signed his World War II draft card on April 27, 1942. His address was 415 Fullerton Parkway, Chicago. He was self-employed and worked at 75 East Wacker Drive in Chicago. Excerpts from the 1942 trade journal, Sales Management, article, "Alka-Seltzer's Glad Ad-Artist":

Thousands have chuckled over the doings and sayings of the big-headed little people in the Alka-Seltzer and One-a-Day Vitamins car card advertisements. Their creator, G.W. French, of Chicago, is just as colorful as they are, and he radiates the same cheerful optimism that characterizes them (except those among them who have not yet discovered the virtues of Alka-Seltzer).

Born on a Michigan farm, Artist French has never done any other work except drawing—first for newspapers, as a cartoonist, and later as an independent commercial artist. He started making the Alka-Seltzer drawings in 1934, adopting "large head, small body" figures, so that the "audience could see the facial expressions of the speaker." He writes the verses himself. The characters are everyday people in everyday situations.

Cartoonist French's philosophy is thus summed up in his own words: "I want my drawings to radiate happiness and to belittle distress. I want people to feel better just by reading them and looking at them…"

Samples of his Alka-Seltzer ads can be viewed at Lambiek.


George W. French, 71, of 415 Fullerton Pkwy, cartoonist and commercial artist, died yesterday at his home. Surviving are his widow Mae, two daughters, Mrs. Dorothy Ford, and Mrs. Marjorie Ruud, three grandchildren, and a brother. The funeral will be held tomorrow in the chapel at 5501 N. Ashland Ave.

Comments:
George and his wife Mae were close friends with my parents. Upon George's death resulting from an accident involving a Chicago CTA bus Mae gave my parents several pieces of George's work. I am selling this collection which includes original proofs of (3) pieces of billboard ads, (2) sets of car card ads that includes (4) ad strips each, an oil self portrait and a photo collage of head studies of George (12) pics. All of the a above is framed and matted excepting the collage. Asking price is $750.00 + shipping. Photos available. Contact me at doug.whitson@cox.net or call 623-910-4799.