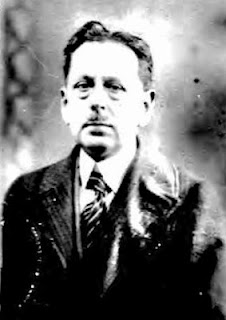 Harry B. “Dickie ” Martin was born in Salem, Illinois on May 26, 1873, according to a 1920 passport application at Ancestry.com. Wikia said his first name was Horace but I have not found any documentation using that name. The 1880 U.S. Federal Census said he was the third of four children born to Thompson and  Jennie. The family lived in Salem where his father was a laborer. Information about his early education and art training has not been found. The New York Times, April 16, 1959, said, “...Mr. Martin studied at Vincennes (Ind.) University and started newspaper work in 1893. He came to New York in 1904 and worked here for The World, The American and The Globe....”


The 1900 census recorded Martin in St. Louis, Missouri at 4155 West Bell Place, where his aunt was the head of the household. His occupation was cartoonist and artist. The St. Louis Republic (Missouri), December 4, 1900, noted his marriage:

The marriage of Harry B. Martin, a well-known newspaper cartoonist, and Miss Susie Flanders was quietly solemnized at St. John’s Episcopal Church, Dolman and Hickory streets, at 11 o’clock yesterday morning. The ceremony was performed by the Reverend C.N. Molier, rector of the church, and was witnessed by a few relatives and friends of the young couple. At noon Mr. and Mrs. Martin started to New York. They will return to St. Louis in a short time.

For the St. Louis Post-Dispatch, he created the Weatherbird. The Society for News Design said:

...The Weatherbird is a Post-Dispatch tradition, and the oldest continuously running daily cartoon in American journalism. The first Bird was published Feb. 11, 1901.

The original Weatherbird, drawn by Harry B. Martin, was quite literally a silent “weather” bird. Martin thought he would need six versions (sun, rain, snow, cloudy, hot and very cold) to cover the range of St. Louis weather conditions, but he soon realized the Bird had a lot more to say. Before long he was drawing a new Weatherbird each day that was related to something in the news....

Martin came up with the Weatherbird while on a trip when he saw comical photos of young birds with gaping bills.

The Warsaw Times-Union (Indiana), April 16, 1959, said, “…One of the early comic strip cartoonists, he gained his nickname from the cartoon he drew for the St. Louis Post-Dispatch titled ‘Dickie Bird.’” In 1903, according to Society for News Design, Martin moved to New York City, where he produced the strip, It Happened In Birdland, that started in April 1907 and ended in September 1909.

He has not been found in the 1910 census. His strip, Inbad the Tailor, ran from April 1911 to June 1912. In the 1915 New York State Census, he lived with his wife, Susan, and two children, Doris, 10, and Gould, 13, in Queens, New York. The New York Times said, “…Considered a leading authority on golf, Mr. Martin promoted the growth of the professional sport during the early years of this century. He was a founder of the Professional Golfers Association in 1917 and organized a number of exhibition golf matches. At one time he was the publisher and editor of four golf magazines.”

In 1920 the family of four resided in Manhattan, New York City at 538 149 Street. He was a cartoonist and writer. His 1920 passport application revealed that he was a New York Globe correspondent on assignment to cover golf in England and France, then traveling to Belgium. The 1925 state census recorded the family in New York City at 344 West 72 Street. Martin had four years of high school and worked as an editor.

Their next address was 340 West 72 Street, according to the 1930 census. Martin was still an editor. He has not been found in the 1940 census, but his wife and daughter lived at 240 Waverly Place since 1935 and possibly earlier.

Harry B. Martin of 50 Park Avenue, a newspaper man and sports authority, died...of cerebral thrombosis in a nursing home here. His age was 85. He was known as Dickey....

...His books on the game included “Pictorial Golf,” “What’s Wrong With Your Game?,” “Golf Made Easy,” “Golf for Beginners,” “Great Golfers in the Making,” “Graphic Golf” and Fifty Years of American Golf....”

Comments:
Alex let me know if you receive this email I have questions about the artist Harry Dicky Martin. Very much enjoyed your article thanks