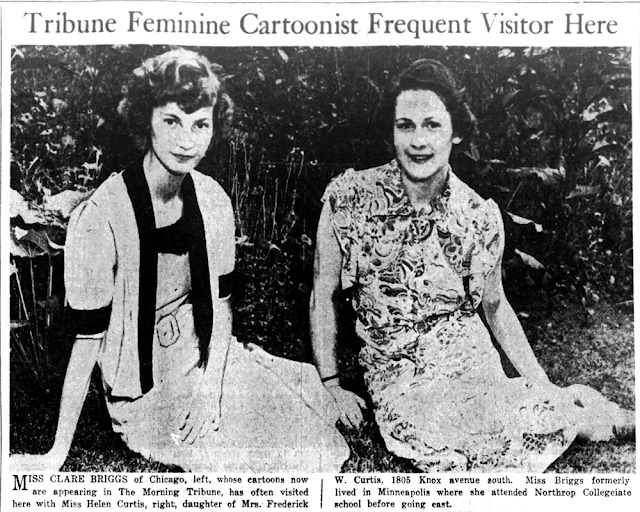 [Originally printed in the Minneapolis Tribune,August 15 1939]


The appearance of Miss Clare Briggs' cartoons in the Morning Tribune, starting yesterday, marks a real homecoming for her, as she is a former Minneapolis girl and has many friends here. Miss Briggs, daughter of the late famed cartoonist, Clare Briggs, lives in Chicago now. She will come late in September for a visit with Miss Helen Curtis, daughter of Mrs. Frederick W. Curtis, 1805 Knox Avenue South.

Miss Curtis visited Miss Briggs in Chicago a few weeks ago and has in past summers been her guest at Mrs. Briggs' home, Westgate, a large estate near Leesburg, Va.

In her apartment in Chicago, the young artist has a map studded with pins showing all the cities where newspapers are now printing her cartoons, Miss Curtis said. She only started the syndicate feature in June and already her map is marked in many places all over the country.

When the Briggs family lived here, their home was at Summit and James avenue south. Miss Briggs attended Northrop Collegiate school and when they moved to Chicago, she transferred to the Roycemore school at Evanston, Ill. She has attended art schools in Chicago and Washington, D.C., and traveled abroad, studying in Munich.

The youthful cartoonist also is interested in wood carving and to further this study she enrolled in a school in North Carolina devoted particularly to cultivating the native art of wood carving among the mountain people.

Comments:
Hello Allan-
Since I know you had a run of the Minneapolis Tribune, you have seen Miss Briggs' cartooning efforts. She tried a resurrection of her father's old series, with rather tepid results. I don't think she had the understanding of human nature and gag mechanics pére had. One I recall had a girl being mortified by her father showing a prosective beau her nude baby pictures. I can't see many fathers who'd pull a thing like that, but Miss Briggs would often just take one of her daddy's gags and adapt it, often with gender switches, to make it hers.
I had a run of one of the papers that took her short-lived series, (The Indianapolis News) and If I remember correctly, it was syndicated by Esquire Features. They had several series including Paul Webb's Mountain Boys and Hedda Hopper's Hollywood column.