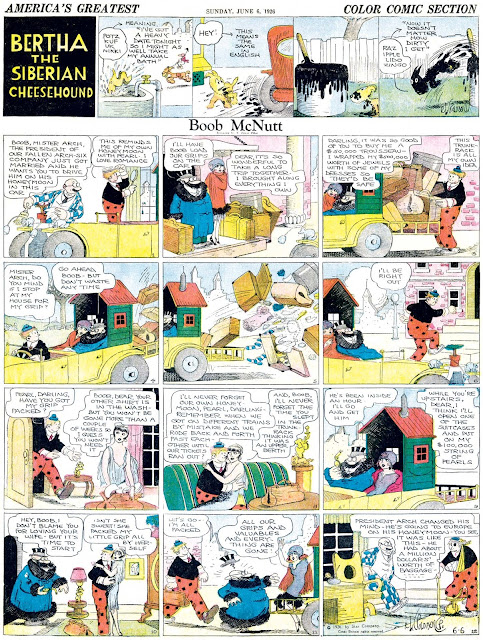 Boob McNutt began as a quite extraordinary new Sunday page in 1918*, featuring a dim-witted fellow who was intent on committing suicide. I know it sounds horrific, but in the hands of Rube Goldberg it was hilarious. Unfortunately, Goldberg eventually worked through that vein of black comedy and the strip evolved into a sort of domestic comedy, where Boob's naivete gets him into mostly uninspired silly situations.

The strip would eventually rebound around 1927 into a looney adventure storyline that offered Goldberg much better raw fodder from which to make comedy hay. But in between, the strip was quite frankly deathly dull.

On January 25 1925, Goldberg added a dog named Bertha to the McNutt household. On May 3 1925, the dog began talking in "dog language", with asterisks translating the nonsense into English. It could have been a cute idea, but 99% of the time the translations weren't even intended to be funny, they were just pointless comments on the situation.

When the Hearst Sundays added toppers in 1926, on January 10 Goldberg gave Bertha the top of the page, added a very Goldbergian breed name (earlier in the main strip she'd been called an Egyptian Wafflehound), and continued the mostly pointless conceit of translating her dog language.

The title Bertha the Siberian Cheesehound seems like it would be an entry point to some inspired Goldberg lunacy, but it wasn't. Perhaps recognizing that the strip was terribly weak, it ended after a little over six months, on July 4 1926. It was replaced by a new two tier topper, Bill.

* Many published histories insist that it began in May 1915; it did not.