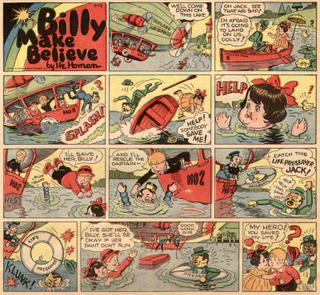 Billy Make-Believe was a short-lived Sunday strip by Harry Homan. The strip started 7/22/34, and the end date is why I’m writing this post. I have four conflicting pieces of evidence regarding the end date:

2. According to the United Feature Syndicate’s internal records, the strip ended on 1/31/1937.

3, The Editor & Publisher annual syndicate feature listing for this strip ends in 1938, which means that the syndicate was apparently still offering it as of mid-1938.

4. I told a fib in #1. Actually I have one tearsheet of the strip that was printed in 1940. It runs in a comic section composed entirely of reprints of older strips. The syndicate that distributed this section (World Color Printing) was well known for buying up a complete run of a title from a syndicate and re-running it in their bargain priced comic sections.

Item #4 makes me wonder if this strip might have been offered in reprints much earlier, and the reason I have no original run tearsheets later than 1935 is that the strip went into reprints around that time. Naturally strips offered in reprints are seldom big sellers (if a newspaper editor liked the strip, they would have run it in its original run), so could this account for the lack of tearsheets later than 1935? My thesis is that the strip ended in 1935, then was offered in reprints until 1938 without much success. In fact the offer was not recorded in United Feature’s own records in 1938 as perhaps they had no clients at all buying it by then. By this time it was obvious to UFS that the strip was a dead issue for them, so they sold it outright to World Color Printing for use in their pre-print sections.

Of course this is all just guesswork. Does anyone have tearsheets of Billy Make-Believe from 1936 or later that would shed some light on this question?


EDIT: A mere ten years after this post was published, Jeffrey Lindenblatt has found a run of the strip in the Harrisburg Evening News that most definitely puts the end date of the strip (there is a farewell panel and the strip is dated and copyright-slugged) at December 26 1937. Thanks Jeffrey!

Comments:
I have a box of drawings from Harry Homan and a few things from his son David. I have a lot of signed drawings from him. Proofs for "Billy Make Believe". I have drawings he did in 7th grade. House that was drawn by him and much more. We also have 2 of his comics that were in his box. Also have some panting by Harry.