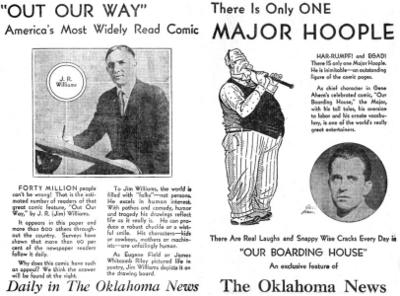 Here are Gene Ahern and J. R. Williams as they looked in 1931 from these syndicate-issued advertisements. Ahern was the creator of "Our Boarding House" (known to many by the name of its star, Major Hoople) and later "Room And Board" an essentially identical feature for a different syndicate.

J.R. Williams created "Out Our Way", and is still well-known among a small but serious fan base for his "Bull Of The Woods" cartoons. These were gags about workers in a machine shop and are fondly remembered by those who worked in such environments. The "Bull of the Woods" cartoons were one of the many topics covered by the "Out Our Way" feature.

I would note that today syndicates practically never produce and distribute such advertising materials as this for newspapers. Back in the 30s this sort of material was supplied constantly to papers. Just one more of the myriad reasons that comic strips are less popular than they once were.

As always, click on the image to see it at full size.