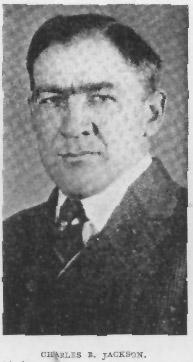 Well, here we go with a first quick comic strip history post. The following article was published in the December 23rd, 1916 issue of "The Fourth Estate". Unfortunately it doesn't provide much in the way of a biography but it does include a rare photo of Jackson:

This year's "Roger Bean Book" by 'Chic' Jackson, cartoonist of the Indianapolis Star, is attracting widespread attention. There are 62 splendid illustrations, each one telling a story that will hold the readers' attention and interest.

To those who are familiar with Jackson's daily strip, which deals with everyday life as it really is, this book will appeal in particular, as it is like having the best parts of an interesting continued story compiled and ready to read.

Those who are not acquainted with Roger Bean will find it profitable to meet the square good natured 'regular guy' he is. His plump little wife, exquisitely feminine, the baby boy they adopted one Christmas eve, and Golduh Stubbins, the inexperienced maid of all work make up the rest of Roger's household. The title of the book is "Roger Bean On The Firing Line."

'Chic' Jackson hails from the state of Indiana, which has produced so many stellar lights in the literary field. His progress has been rapid, and today he is a household idol in Indiana.

Comments:
I came across your blog while googling "Roger Bean". Which I was doing because Chic Jackson is my great-grandfather. Nice to see that his work is still remembered out here on the Net! We've been a newspaper family for years, but Chic was the only one of us that showed his talent in art rather than writing. If you are interested in any biographical information, let me know and I'll put some stuff together for you. Great blog!

Hi Adam -
I'm sure we'd all love to read some biographical material on Roger Bean's creator. I'd share it on the blog, natcherly.

I have one question in particular about "Roger Bean". Many years ago I read somewhere that the character was originally an advertising shill for a brand of coffee called Roger Bean. Any truth to that?

chic jackson was my great grandfather as well. I recall 24 yearly additions of yearbooks following the Bean family. thanks for remembering. jeff jackson

Hello,
I also googled Roger Bean and came across your site. I am a junk hound and bought 5 boxes of old 78 records today at an estate auction. One box contained an old Roger Bean comic. The front cover says No. 2 of the twin Baby Grands. It is signed Chic Jackson and on the bottom it also has Politics, Pickles, People and Police... I am trying to find out something about it...if anyone can tell me more it would be great....thanks... randy baker

The comic strip came first, then the books, coffee, and other merchandise. Roger Bean was actually an attempt by the Indianapolis Star to draw attention to its classified advertisements, but Jackson proved such a good writer and creator of characters and situations that the strip took off among readers and was eventually syndicated.

I am interested in exchanging information with Chic Jackson's relatives. I am seeking information about where he was born, where he grew up and where he was living in 1905. He painted a watercolor of my grandmother and gave it to her for a wedding present in 1905. I do not know how they knew each other and would like to see if I can find the connection.