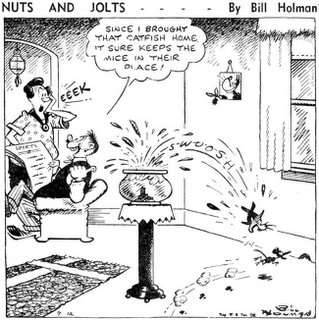 We are all familiar with the immortal Smokey Stover, product of the demented genius Bill Holman. However, Holman had a second long-running creation that, for reasons I can't fathom, always flew under the radar.

The story actually begins in 1922 when Gaar Williams began a daily series of untitled, or more accurately, a set of revolving titled, comic panels for the Chicago Tribune. Gaar's most famous series was Among The Folks In History, but he had many other running titles in the repertoire of his daily spot. Anyway, Gaar up and died in 1935. Rather than retire the feature, Gaar's spot was taken over by Bill Holman, who jumped right in, even using Gaar's old titles. But Bill being Bill, he immediately put his looney stamp on the proceedings.

Finally in July 1939 Holman dropped the multiple-titles act and named the panel Nuts And Jolts for good. The feature ran daily until 1970, never running in more than a handful of papers. Can anyone supply a definite end date?