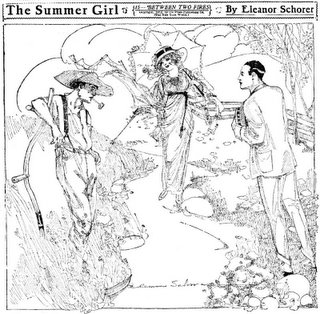 Most of us know of Nell Brinkley, great pioneering female cartoonist of the early 20th century. She was a household name in the 1910s and 20s, famous for her 'Brinkley girls', beautiful women notable especially for their luxuriant tresses. As happens with most any successful cartooning niche, Brinkley had her imitators. One of the more notable was Eleanor Schorer.

Schorer was a fixture at the New York Evening World. In 1911 she was already illustrating fashions for the paper when she produced her first cartoon feature, Her Dreams At Eighteen, a two week series of romantic panel cartoons. She soon earned herself a constant, if not consistent, place on the Evening World's feature page. She seldom produced a series of cartoons that ran more than a month or two, but she produced those series in bulk. Over the next five years she would produce over 30 titled series. She divided this work between romantic cartoons in the Brinkley mode, and children's features such as Bessie And Bobbie In Search Of Fairyland. One particularly notable series was Getting Ahead As A Business Girl, biographies in comic strip form of successful women businesspeople.

Schorer got back out of the cartooning biz in 1916 but continued supplying fashion illustrations for the World after that.

Our sample above, from 1912, is from Schorer's series The Summer Girl.

Comments:
Anyone have copies of The Land of Make believe Series done by Shorer for The Evening World ~1908/09?