Here's a group of features that are memorable for their longevity. No, not like Blondie or Henry. Actually these features had very short runs originally. However, when the features were cancelled by the syndicates that originally ran them, the material was then sold off to companies that sold the features in reprints for many years. These 'reprint syndicates' could afford to sell the material very cheaply, so they were favorites with small rural newspapers. These particular strips were resold at various times by Columbia Feature Service and International Cartoon Company.

The original runs of all these features were in the late 1910s and early 1920s. Believe it or not, some of them continued to appear in some small newspapers as late as the 1970s! To give you a feel for how bad the printing usually was on these, I've refrained from cleaning them up. Those big blotches of grey mud you see are the result of cheap printing plates and dirty presses. 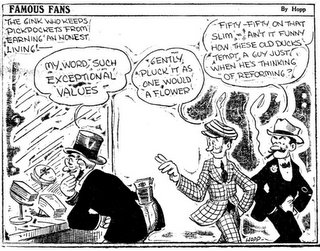 If anyone can supply any information on these reprint syndicates (like original sales literature or other background material) I'd love to hear from you. I know very little about them or how they operated.

For the record, our samples here are:

Bringing Up Bill by Jack Farr (though credited to A. Task), original syndicate was US Feature Service. Earliest samples found from 1922.

In Our Office by Wood Cowan, originally syndicated by George Matthew Adams Service, originally ran in the early 20s but I've never found a paper that ran the originals, only the reprints.

Famous Fans by Ray Hoppmann (also part of the run by Haile Hendrix), originally syndicated by US Feature Service as early as 1919. This was a special favorite of the reprinters and I have seen this one appearing in the early 70s.

Things That Never Happen by Gene Byrnes, originally a part of the larger feature It's A Great Life If You Don't Weaken that was syndicated by the New York Evening Telegram in 1915-1919. 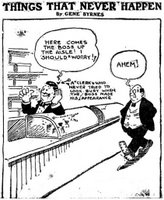 Comments:
I've got a group of Bringing Up Bill that I've been amassing for eventual posting on Barnacle Press, so this is very interesting insight into these comics.

Just wanted to say, as well, that I really love your blog. Your comments on these strips are endlessly informative and fun. Great stuff!

Thanks anon; I've spent some time on your barnaclepress blog as well. It's an impressive and eclectic array of material you're gathering there.

Hello, Allan---IN OUR OFFICE by Cowan was originally run in the MILWUAKEE EVENING SENTINEL in 1919. Find a run of that paper!----Cole Johnson.

Thanks Cole, I'll add it to the long roll call of papers that need checking!

I just found an original cartoon by Haile Hendrix. 8 panels about a woman getting a $25 perm. Along with the original art was a clipping from the 1940 newspaper with the cartoon in it. Any info on Hendrix?
Dan

Not much. He was active in newspaper cartooning in the 1910s-20s, but I thought he'd abandoned that for illustration work well before 1940.

Many sources say the saying "It's a great life, if you don't weaken" first appeared in a novel, "Mr Standfast," by John Buchan. However, the Gene Byrnes feature predates this book by three years. Is Byrnes or the newspaper the true first instance?