Robert L. Dickey and his Dogs 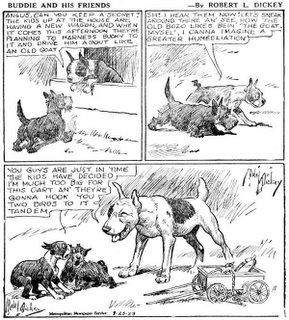 Robert Dickey was famous for his illustrations and cartoons of dogs. Frankly, though, I find his dogs a bit unsettling; they all seem to have a gleam in their eyes that says, "the second you turn your back I'm gonna take a piece out of your heinie."

Anyway, Dickey's dogs had a long life in comic strips. The first series ran 7/14/1919 to March 1931 - it was either a daily or a weekly strip. I say either because the frequency of the strip seemed to vary from year to year. It was always formatted as a daily, but it was commonly run only in Sunday childrens' sections. To make things more confusing the strip went by at least three different names, including Buddie And His Friends, Dickey's Dogs and Just Dogs.

In May 1931 Dickey's dogs graduated to the Sunday section with a strip titled Mister And Mrs. Beans. In 1933 the strip became a half-page, was retitled Buster Beans, and gained a companion, or topper, strip, called Bucky And His Pals. The pair of features ran until 7/21/1940.

Dickey is famous also to many generations of kids for his illustrations in the books of Albert Payson Terhume.