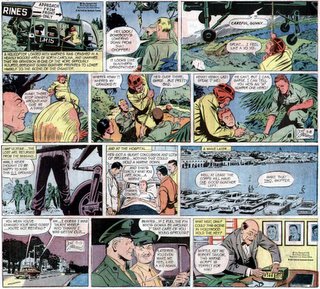 We covered the Tales Of The Green Beret strip a few days ago; here's another comic strip casualty of the Vietnam War. Dan Flagg, a strip about a Marine troubleshooter, was created by Don Sherwood and syndicated through McNaught Syndicate starting 4/22/1963. According to an article in Menomonee Falls Gazette #103 Al McWilliams began ghosting the art "almost from the start" of the strip.

The strip was real hardboiled adventure stuff, the sort of thing that would have been right at home appearing in Soldier Of Fortune magazine. For this reason it didn't find a huge number of newspapers interested in it, but it did get a semi-respectable list at the start. The client list, though, seemed to bleed off pretty fast. The strip is already getting really hard to find by 1964. The strip changed syndicates from McNaught to Bell-McClure sometime in late 1965 or early 1966, presumably a matter of Sherwood looking for a syndicator that could breathe new life into the client list. If anything the opposite happened, because until I stumbled upon the samples above a few days ago, which are from May 1966, I'd never found a single strip printed later than early 1965.

The strip was last advertised in the Editor & Publisher Syndicate Directory in 1967. Presumably the strip lost the remaining client list as public dismay over the Vietnam War increased. Has anyone seen an example from 1967? Can anyone supply an end date?

Comments:
I found 1/27/67 in the Oneonta Star (from Newspaper Archives) - as the year progresses I'll see if I get an end date

Looks like July 15 1967 was the last strip, appears Don Sherwood lived in Oneonta and they carried it until the end.

I too heard that Don passed away on Saturday, in Charlotte, NC, but have been unable to verify by any newspaper accounts or obits. If someone does find out this information, would you please post where and which newspaper it can be found? Thank you. Don was a very nice man and I had a few laughs with him.

Just heard today that Don Sherwood has passed away, but details are sketchy. Am preparing an obituary for local newspaper, and would welcome any details anyone has, either about where and when he died, or stories and memories about him. Please e-mail jkevlin@thefreemansjournal.com. We go to press the evening of Tuesday, March 23.

Donald Sherwood died Saturday, March 6, 2010 while in the compassionate

care of the staff at Levine and Dickson Hospice House in Huntersville, NC.

A funeral service and burial is being scheduled at Arlington Cemetery.

I can confirm that the Sunday ran at least until 5-14-1967 as I own the original of that date with Bell-McClure copyright indicia affixed.