Rudy - Doomed From The Start 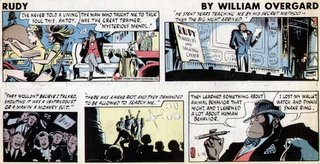 How do you doom a comic strip to a short run? Well, in the case of Rudy by William Overgard, you make the humor smart and character driven. You add great art. You build it all on the basis of an unusually intelligent and involved story. Once you've got all those great ingredients, not even a talking monkey can save a strip from oblivion.

Rudy was a dapper, urbane talking chimp, the only one in the world. He was a washed-up vaudeville star trying to make a comeback in present day (1980s) Hollywood. Much of the humor comes from his interactions with entertainment industry hangers-on, agents of questionable character, and an endless string of Hollywood oddballs and weirdos. Think of him as sort of like George Burns in The Sunshine Boys and you'll have the general gist of the strip.

The strip ran Sunday and daily from 1/3/1983 to 12/22/1985. If you get a chance to read the strip (a reprint book, Rudy In Hollywood, was published in 1984) and appreciate writing that transcends the run-of-the-mill comic strip level, you'll really enjoy Rudy.

Comments:
How hard is the reprint book to find? This looks rather intriguing to me.

I don't see them come up for sale very often, but you might try

This site searches all the used and rare book sites to find what you want. Be sure to select the Used Books option (the default is for new books) or you won't get any hits.

I remember Rudy with mixed feelings. Yes, he was smart - though I didn't pick up on the George Burns resemblance - and the strip was well-drawn, but it seemed to me that it ran out of ideas. Example: the repetitive gags about Rudy's fat landlady, who was a "compulsive waterer", something I never saw in real life, got pretty boring.

Thanks for mentioning one of the most memorable strips from the 1980's..I LOVED Rudy..I was about 16 at the time and was really into old Hollywood at the time, so it was great timing. I found a copy of the book so at least I have that to remember it by. The humor was a bit over my head at the time but the beautiful artwork didn't pass me by!

When the Los Angeles Times cancelled "Rudy" I was devastated. I loved it because it depicted Old Hollywood, including the Garden of Allah, the apartment complex overseen by Rudy's overweight, overwatering caftan-clad landlady. The Garden was an actual old Hollywood landmark torn down in the late 1950's, sometimes inhabited by stars and screen writers such as F. Scott Fitzgerald and George S. Kaufman.

Is the original Rudy artwork somewhere safe, I hope?

I did buy the Rudy book new back in 1985 and still treasure it. The one reason I bought it was my very avid devotion to William Overgard and his work on the Steve Roper & Mike Nomad strip, which I still love. I became acquainted w/Roper's writer John Saunders due to living in the same city, and received several Overgard originals. If you love the Rudy art, you'd also love Overgard's work on Steve Roper & Mike Nomad.

Rudy ran in the L.A. Times and I was fortunate to have read it during its run. I missed the finale and always wondered what became of it.

Growing up in Denver, I read it as the Rocky Mountain News carried it. Such a wonderful departure from the other strips as it was really scary and cool beyond its time. The characters of Hope and Bonita had good plot lines...How did she mix martinis and not fall off her perch?

I read this charmingly retro, gently amusing strip in a Houston paper back in 1983, and I really enjoyed it. I wish it had lasted. After some years of searching, last month I finally ran across a copy of "Rudy in Hollywood," the collection of some of the Overgard strips, and I savored it all over again. This was smart and very special stuff, so stylishly written and drawn.