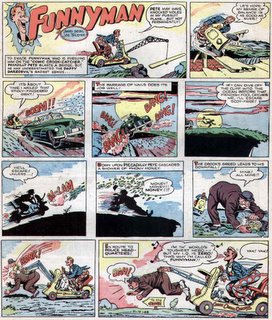 Jerry Siegel and Joe Shuster, the team that created Superman, took a stab at creating a second phenomenon in 1948 when they unveiled Funnyman to a public that let out a collective yawn. The character, who started life in comic books, was a goofy comedian who dressed up as sort of a superhero and fought crime with lots of yocks along the way. The concept of a humorous superhero had already been done before and done better (Jack Cole's Plastic Man coming to mind). The comic book version of Funnyman lasted just six issues, but inexplicably the concept, now a proven loser, was picked up by Bell Syndicate to run as a newspaper comic. I guess Bell believed that Funnyman would appeal more to adult newspaper readers than the comic book reading kids.

Turns out that Bell Syndicate was wrong. The strip, which started on October 11, 1948 (just as the many unsold copies of the comic book's last issue were being yanked off newsstands) intially had few clients and things went straight downhill from there. The strip was both a daily and Sunday -- the Sunday ran in very few papers and the daily was practically nonexistent. In June 1949 some genius apparently decided that the whole problem with the strip was that goofy Funnyman guy, so the character was dropped from the strip (at least from the Sunday - I haven't found any dailies that late in the run).

The strip limped along awhile longer, now completely and utterly directionless with no title character in evidence. My last example of the Sunday is dated October 9 1949, and I'm guessing that was the last installment. Has anyone seen any later, and does anyone know when the daily ended?