Who needs files when we have the web. I just Googled Leslie Elton and found that he wrote and directed a series of animated cartoons in 1918-1920. Here's the link. 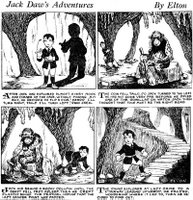 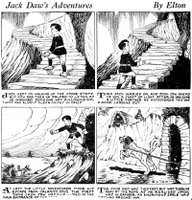 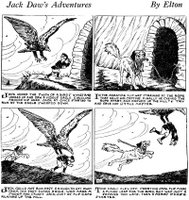 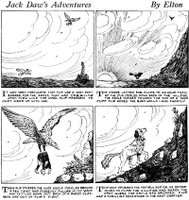 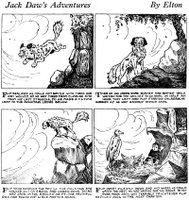 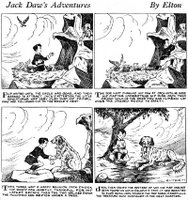 Comments:
Hi Allan,
Les Elton did a couple of sound cartoons in the early 1930s that are coming out on a DVD called "Cultoons" Vol. One. They are "Monkey Doodle" and "The Hobo Hero". Elton was a very eccentric draftsman and animator! He deserves to be better known.
Best regards, Mark Kausler

Hi Mark -
Can you suggest any sources for more info on Elton?

Graham Webb in his 2000 book THE ANIMATED FILM ENCYLOPEDIA, had Elton doing animated cartoons back in 1917-1918. The two cartoons mentioned by Mark Kausler star Simon the Monk, released in 1930 by Kopfstein.

there are only a handful of books dealing with silent cartoons, and all of mine are unavaiable -- except for Donald Crafton's BEFORE MICKEY (1993 ed). he mentions on page 149, that "Leslie Elton, a newspaper sports cartoonist, joined (J. R. Bray) in September 1916 and took over the "Heeza Liar" series."
p269 mentions Elton joining Universal in 1919.
p273 "in the hands of Elton and (Vernon "George") Stallings, the satiric qualities were deliberately eradicated, and the Colonel (Heeza Liar) became a buffon."

Thanks for the info, Steven. I've never seen Elton's sports cartoons. He must have been a local guy, because I'm sure I would have seen his work if it was syndicated.