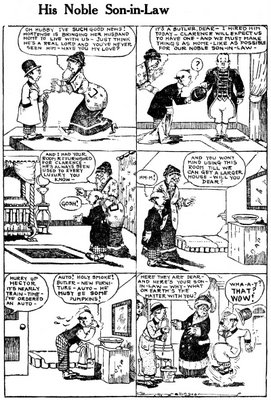 Charles H. Wellington started his syndicated cartooning career with World Color Printing in 1904. He was an excellent cartoonist from the start, his ideas were fresh and funny and best of all (from the syndicate's perspective) he was a real workhorse.

Wellington was one of the backbone menbers of WCP's staff through 1907, until the call of New York finally became too strong. His first job in the Big Apple was with the New York World, where he only managed to make a single sale. He found a much more receptive audience in the Hearst camp, though, and produced many daily-style series for them, mostly for the Evening Journal. In May 1911 Wellington produced an innocuous and short-lived strip called His Noble Son-In-Law. There were less than ten installments of the series. The idea was anything but fresh and pretty much ran the course in that short time.

The plot was already old hat. Starting in the American gilded age it had become fashionable for social climbing debutantes to marry titled beaus from Europe. In real life, and in the funnies that mirrored it, many of these dukes, earls and other assorted peers turned out to be penniless lazy neer-do-wells. Many of the titles were real, but the gents often failed to live up to their impressive names. The phenomenon became a favorite target for humorists, and His Noble Son-In-Law is one of many times the subject was mined for laughs.

The short-lived series was eminently forgettable, or at least seemed to be forgotten. Wellington went on to create other series for Hearst in 1911, then made a jump over to the New York Globe, where his work was sometimes picked up by the Associated Newspapers cooperative.

In late 1913, while apparently still working for the Globe, Wellington began a new Sunday strip for the McClure Syndicate titled Pa's Imported Son-In-Law. It was a direct descendent of the original series. The strip began on 10/19/1913, and once again Wellington didn't stick with it long. His last strip ran on 1/4/1914, after which the title was continued by uncredited cartoonists (one of which was Ed Carey). This version of the strip lasted until at least August 1914, and then was revived by McClure as Return Engagement of Pa's Son-In-Law on 4/18/1915. This version, now signed by Ed Carey, ran until 7/2/1916.

But Wellington wasn't done. He left McClure to return to the Hearst fold, and continued the series yet again, this time as That Son-In-Law of Pa's, for Hearst's Newspaper Feature Service syndicate. This series started on 12/8/1913, and a daily version was added in 1915.

This series met with good success as part of the NFS package, and Wellington stuck with it for Hearst until October 1920. But Wellington wasn't quite done switching syndicates.

The next, and last, move had Wellington jumping yet again, this time to the New York Tribune's syndicate, where the strip made its last name change, to Pa's Son-In-Law. Apparently now tired of jumping syndicates, Wellington continued the strip here for over two decades. It finally expired on 5/17/1942.

Our sample today is the very first strip from early May 1911.

Comments:
Allan,
Thank you for straightening that out.

Sometime you're going to have to tell
us about those strips with the exact
same title but were completely
different strips.

I’m happy to find an authoritative corroboration of the fact that “Pa’s Son in Law” (to use this as a common title for this messy production) was, in fact, **two** different series (like “The Katzenjammer Kids” and “Captain and the Kids”, “The Newlyweds” and “Their Only Child”, or the two “Yellow Kids”, or the two “Buster Browns”) and not, as many books assert, one single series that, for a while, was drawn by Ed Carey and featured the antics of Charles Chaplin.
Nothing new under the sun (it seems that cloning series was a popular sport at the time) but with some oddity, for instance the fact that, for one month or so (1913 Dec 8 to 1914 Jan 4), Wellington signed two identical series with exactly the same cast of characters (Pa, Cedric, etc) for two competing syndicates.
Concerning the Mc Clure series (“Pa’s Imported Son In Law”), some early pages were titled “Pa’s British Son in Law” (for instance, 1913 Nov 2). After the 1914 ? ? - 1915 Apr 18 hyatus, on 1915 May 9, the character of “Charlie Chapman” was introduced: he was a clone of Charlie Chaplin, and became the main star of the strip, that in 1916 was retitled “Pa’s Family and his Friends”.

Best, have a nice Easter
Alfredo

Hi Alfredo -
I think the December 1913 overlap is reasonable considering that Wellington would have been working ahead for McClure.

I probably should have mentioned the Charlie Chaplin connection, but the post was getting awful long!

I just found your site. As an artist/cartoonist/history buff, it tickles me to no end to find something that covers ALL of my interests in one spot. I've been digging into C.H. Wellington's work. He had an interesting style. I found some of his strips on newspaperarchive and newspapers.com.
I'll post anything I find. Meanwhile, I'll keep browsing. Some of the older artists and strips are better that the bilge being put out now.