The Roy Rogers strip was throughout its run offically bylined to Al McKimson. This name, I am told, is a pseudonym for the brothers Tom and Chuck McKimson (art and script, respectively). However, over the years I've gathered a number of additional credits from various sources. Being somewhat skeptical of art and writing style spotters, I'll just tell you what I've been told regarding the Roy Rogers strip and let you choose whether or not you take a grain of salt with it, as I do. Any additional information, or refutation of this information, is of course very welcome. 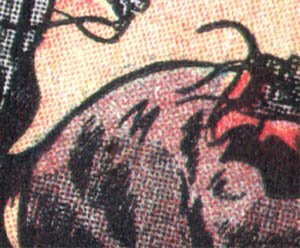 One credit that is ensured is that of artist Mike Arens. He first started taking surreptitious credit on the strip on 5/10/1953, as can be seen in our sample. The detail view shows his monogram on the flanks of a horse. The monograms eventually changed to initials, and became less secretive. The art style on the Sundays doesn't seem to change on this date, so presumably Arens had started earlier, taking not even clandestine credit for his work.

EDIT (5/23/06) : Alberto Becattini sends a message wherein he discusses the credits on Roy Rogers. I'll pass along what he says:

"The Al McKimson by-line refers to Western Publishing comics editors Al Stoffel and Tom McKimson. Chuck McKimson was not initially involved in the production of this strip (which began in December, 1949), as he was at Western from 1954 to circa 1963.

Back to Roy Rogers:

Now to the artists:

I've asked Alberto for his sources for this information so that we may be better able to judge the accuracy of the above.

If you have one of those 1960 samples, we can probably tell if it Toth or not.

I believe that there are Ken Ernst signatures on some of the 1953 dailies from the Lincoln Star (Nebraska).

2. John, I can't imagine Ernst would have time to do both Mary Worth and Roy Rogers. Let's see some proof, buddy!

3. Sorry, Ger, my latest Roy Rogers tearsheets are from 1957. It's a pretty rare strip by then.

Seems things are not as Pat as I'd thought. Ken's signature seems to have jumped the Dale between Roy and Mary Worth, so I'll bite the Bullet and say I'm sorry for being Trigger-happy. Pretty Sly, eh?

John -
Ouch, that was painful! Blogger has a spam detector, now they need to start working on their pun detector!

Pete Alvarado told me the name "Al McKimson" was short for "Alvarado McKimson," meaning him and Chuck. He said the two of them were the main artists.

Hi Mark -
That sounds perfectly sensible. Always wondered about that 'Al' business, never made the connection. Thanks!

"Hi" is signed to the dailies starting on 21 Sept 1953, To my eye (which doesn't count in this thread), he'd been drawing it for at least the six earlier months that I've seen.
I also looked at the Jan 1961 dailies and sundays, which have the look of Toth and even a Toth signature box, with the name of Arens in it. So ghost work for these. Arens name leaves the Sundays circa September 1961 SR