Obscurity of the Day: Dem Boys 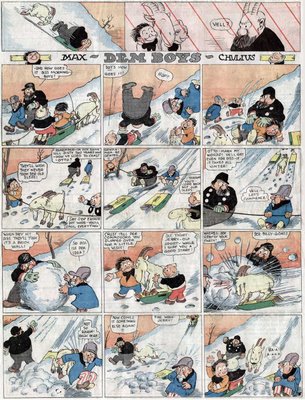 By 1915, the World Color Printing syndicate seemed to be running on fumes. They still had their great Slim Jim feature for the front page, but the interiors of their 4-page color comics section had been reduced to running reprints of Philadelphia Press features from the early teens. The back page had the long-running paper doll feature Anna Belle and a strip titled Duke featuring a horse.

Both these back page features disappeared abruptly on November 14, 1915. They were replaced either immediately or soon thereafter by a new full page feature titled Dem Boys. The feature was occasionally signed Karls, but was most often unsigned.

Looking at the sample above, its about as obvious as can be that the strip was an unabashedly exact copy of the Katzenjammer Kids. Now there's no denying that there was plenty of this sort of thing going on in the early days of comic strips. For every successful strip, there were plenty of cartoonists trying to duplicate their success simply by copying the formula. Dem Boys, though, may be the most egregious ripoff ever. The character designs are so close to the originals that if you changed the names of the characters, the casual reader would surely think they were reading a Knerr or Dirks strip.

What is perhaps most interesting is that the series ran for a long time, until at least sometime in 1918. Surely if there weren't already two 'legally' competing versions of the Katzies, the hammer of the Hearst or Pulitzer legal departments would have fallen quickly on Max and Chulius. But I suppose it would be hard to make a legal argument that Dem Boys was unfairly stealing the plot and characters of the original, when there were two originals!

I have no exact running dates on the strip. My files of World Color Printing have some long gaps in late 1915 and 1918. Regarding the starting date, I do know that the prior features that used that space ended 11/14/1915, so a seemingly likely starting date is 11/21. On the other hand, Cole Johnson in StripScene#19 states that the strip began on 2/20/16. Cole is a researcher par excellence and I find it rarely fruitful to dispute his pronouncements. On the third hand, Alfredo Castelli in a draft of his forthcoming book claims a start date of 11/29/1914, which seems highly improbable unless there were multiple versions of the World Color Printing section in circulation (I don't believe that is the case).

On the end date, the best Johnson can come up with is "late 1917 or early 1918", while Alfredo Castelli cites 3/2/1918. Since I have samples as late as 3/17/1918 that can't be right. The strip that presumably took over for it, The Kelly Kids, is not known to have started any earlier than December 1918. So somewhere in there is the best I can do so far. Can anyone help?

Update, 6/1/2013: Since this post was made, additional info has come to light. It appears that Dem Boys may have originally been a local feature of the Cleveland Leader before it was picked up by World Color Printing (or by McClure, as another bio claims, but which I doubt). According to my microfilm resaerch, in the Leader it started 6/28/14, long before any WCP or McClure section seemed to be running it. There is also talk of a daily version of the strip, but I did not see evidence of it (though at the time I hadn't heard this claim, so I wasn't necessarily looking specifically for it).

Also, according to various sources, 'Karls' is actually Ralph Hershberger. Since Hershberger was active into the mid-60s at least, though, the timeline seems a little strained. Does anyone have a birthdate for Ralph?

In all my years of collecting I never came across the magazine StripScene. Can you what it is/was?

Frankly I don't remember where i got the 1914 date: shall check my tearsheets soon or late, or maybe I just copied a date badly.
BUT
I do have a tearsheet from the "Cleveland Leader" from Feb, 7, 1915 (I'll send a copy to your private E Mail) which is a much earlier date than the ones in the blog; consider that this doesn't seem a "first" page, where the characters are usually intriduced, but a page from an already running series. So a Nov 29 1914 date (i.e. 9 weeks before before) is not SO impossible - For what concerns the ending date, you're right, of course.
All the best
Alfredo

Ger,
Strip Scene was the late 70s/early 80s
version of today's The Funnies Paper
(only stapled, if I remember correctly).
The always pricey Spec Productions has
http://www.specproductions.com/PO05.html
that list.

Hi Ger -
StripScene was by far the best comic strip fanzine ever put out. Edited by Carl Horak, important contributors were the Johnson brothers and Ken Barker. You definitely want to get the run (thru #25) if you get the chance.

I dont really know if this is related to your discussion ? BUT, I have an original colored comic strip of the Shenanigan Kids dated 1919 by Knerr.

I just posted an example from 1915 of "The Kelly Kids" on flickr.

Check that: the strip is from 1916, not 1915, which is still earlier than the date suggested above. (p.s. the date is blurry in the photograph, but I checked the actual tearsheet just now and it's definitely 1916)

Hi PopCulture --
Based on the look of the Hank and Kelly Kids pages you posted, these are almost certainly World Color Printing rerun versions from the late 1920s. The Hank one might well have a copyright line from 1916, but I REALLY doubt the Kelly Kids is dated 1916. The pics are way too small to verify that, of course. Howzabout a close-up?

Right you are! It does bear a World Color imprint, and upon closer perusal of the ads, one can see that the Renn Motor Co. was offering the new Chrysler Plymouth which wasn't introduced until 1928. That'll teach me to trust dates!

Not sure if this helps or is applicable, but in a biography on Ralph A. Hershberger printed in he Sesquicentennial History of the Berlin (Ohio) Community, it says Hershberger drew the daily "Dem Boys" under the pen name of "Karls" for the former Cleveland Leader, and the comic was distributed by the McClure Syndicate.