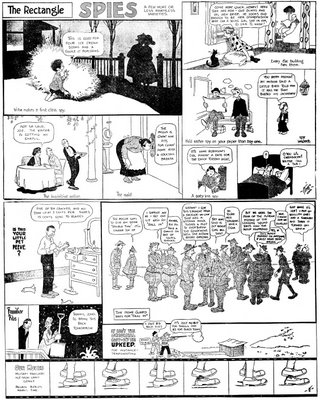 I was about to file this page away when it occurred to me that I've never seen a complete The Rectangle page reprinted anywhere. Maybe my recollector just isn't working well enough, but in any case I thought surely all you Frank King fans wouldn't mind seeing one even if a few have seen the light of day elsewhere.

The story is well-known that the denizens of Gasoline Alley were born in the compartmentalized patchwork of the The Rectangle, King's Chicago Tribune Sunday page normally printed in black-and-white outside the comics section. But they were a late addition to a page that had been running for years. King's page first ran under the Rectangle name on 12/27/1914, but had been running for quite awhile before that as an untitled feature. The untitled version was usually run at a smaller size, and I have so far not traced it back to find the ultimate start date. Anyone with access to the Trib online care to take up the chore?

The Rectangle was retired on 2/8/1920 after having run sporadically starting in 1919 when King added the daily Gasoline Alley strip to his workload.

Comments:
We've got a boatload of Rectangles up at Barnacle Press, on our Frank King page.

I stand corrected, Holmes! So how about that start date, since you've got access to the Trib on Proquest?

I pulled King's works thoroughly from that era, and on the previous Sunday, there was just his "Do you mean what you say?" panel. The next week was the full page "Hints to Husbandettes," which was the first with the familiar bounded rectangle containing themed "unpanel" gags. It wasn't until February of '14 that the Rectangle pages appeared with regularity.

Of course, the PQ database isn't 100% complete, so some of the holes you see on Barnacle Press' page might well still be represented.

Thanks, Holmes!! Good sleuthing, as it were.

Great Blog
Good luck to you and your wife.

My question is kind of off-topic, but I have asked it on many sites and message boards without getting an answer.
In the upper right hand panel, rather than a door, there are drapes at the entryway. This was the fashion in the early part of the century and you can see it in many strips of the time, such as Little Nemo.
When did this stop being the norm and why? I suspect it had something to do with health issues, but that is just my guess.

Hi Bruce -
The doorway draperies were a Victorian style. Beyond the aesthetic value, I would guess that they were mostly used to get some privacy from the prying eyes of maids and servants, a common fixture in even homes of moderate means in the day. As hired help slowly faded away as the norm, so presumably did the privacy curtains.