Fruits of the Film

I have updates today on some of the unanswered questions discussed in previous blog entries.

First, the issue of the Chicago Chronicle 16-page color comics section of 1903. Alfredo Castelli first alerted me to its existence, and I reported my findings on these four posts (1 2 3 4) after reviewing the first batch of microfilm. A new batch of microfilm came in covering 5/17 - 12/9/1903 and I can now say that the section ended on September 27, 1903. After this date the Sunday comics were limited to a black and white page of mostly panel cartoons.

Once again, the microfilm is missing most of the Sunday comics sections. The only ones found were for 7/12, 7/19 and 7/26. In addition to the titles I reported on earlier, these sections allowed me to identify a new batch of continuing titles. In addition to more strips by Marriner and Lederer, Everrett Lowry had joined the section and was contributing a lot of material. Of greatest interest are his strips that he would continue for other syndicates; Deacon Backslider, which was revived at the Philadelphia Inquirer; and Binnacle Jim (start date 7/19/03), which went on to have a checkered history with McClure and the Inquirer both.

Binnacle Jim survived the end of the Chronicle's color section by one week - a final episode was printed in black and white on 10/4. And Lowry wasted no time peddling his wares elsewhere - the strip began appearing in the Philadelphia Inquirer section on 11/22/03.

I have ordered the Chicago Chronicle for 1902 with the hopes of finding the beginning of the section - will keep you posted.

On the Dem Boys front (see original posts here and here), I ordered the microfilm of the Cleveland Leader, where Alfredo Castelli had found an inconveniently early installment of the strip (I had it starting late in 1915, he had it earlier, with rumors that it started yet earlier in 1914). Well, turns out that the strip started way back on June 28, 1914. Now that date makes absolutely no sense with the World Color Printing section (there was no room for this strip then). But another piece of data turned up at just the same time as I got this info. Turn to page 110 in the new issue of Hogan's Alley (#14) and you will find an ad from the McClure Syndicate in which they advertise, among other strips, Dem Boys. Mystery solved! World Color didn't have to make room for it, because it wasn't theirs. Now the only question still needing an answer is when exactly the strip changed syndicates. We'll keep working on that one.

Before we leave the Dem Boys matter, though, I have to pass along something that I found pretty hilarious. The Cleveland Leader put Dem Boys on the front page of their comic section right from the start of the strip in June 1914. The rest of the comic section was all New York World material. If you understand why that's so funny, you are a true blue comic strip history geek. So do you get the joke? 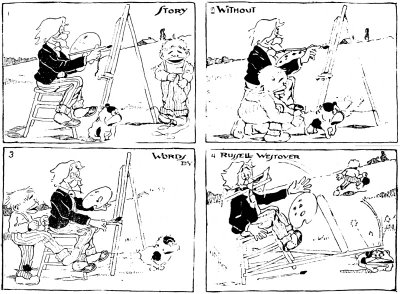 One last update. Back in this post I said that I found what might be the first Russ Westover cartoon to appear in a newspaper in a 1903 San Francisco Bulletin. However, on further microfilm research I find that his first seems to be this comic strip that ran in the Bulletin way, way back on April 20, 1902. Sorry about the bad reproduction - for once it's not the microfilm's fault - the printer attached to the microfilm machine was acting up that day.