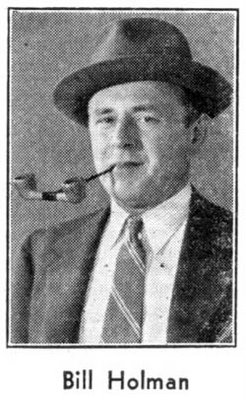 Holmania, a virulent but harmless form of in(s)anity rampant in recent years in "Foo Clubs" of adolescents and detected in the high school generation’s jargon expressing the comic page “foo-losophy” of cartoonist Bill Holman, seems to be spreading. The Chicago Tribune-New York Daily News Syndicate July 1 renewed the Holman contract for two years and this week added to "Smokey Stover" and "Spooky," the Sunday half-page comic strip vehicles for the cartoonist's "foosayings," a new daily panel named "Nuts and Jolts."

The new comic, two and three columns in size, will consist of Holman gags and his inexhaustible supply of "fool-osophic" mottoes. "Zipper," a nondescript dog with a curiosity complex who has cut capers heretofore in one of Mr. Holman's numerous daily comic strips, will appear Thursday as a panel under its own name.

The syndicate, Mr. Holman explained, is concentrating his cartooning efforts in the daily field under the titles "Nuts and Jolts" and "Zipper" because the numerous titles used previously were "somewhat confusing." These included "Problems Made Easy," "It's All in Fun," "There's One in Every Family," "Something Ought to Be Done About This," among others.

To look at Mr. Holman you'd never suspect that he's the man behind all this zany humor appearing now on the comic pages of some 90 daily and Sunday newspapers. Thirty-six, and a bachelor with his eye on the right girl, he grins quite innocently all the way up to his bald spot above his forehead, as he confesses he "thinks so much about this foo stuff that I'm beginning to lose my own identity."

During the interview Mr. Holman let us in on his secret - the origin of the word "foo" which tickles juvenile funnybones when it appears in such mottoes as "Fifty-four Forty or Foo," to use one of his fooier (fooey, he's got us doing it) tomfooleries.

"It's just a silly word that doesn't mean anything," the cartoonist confided. "About ten years ago when I was doing a panel for Collier's I needed a name for a car and used 'Foo.' It tickled me and I started using it often on badges or license plates or wherever a space filler was needed."

The word insinuated itself into every Holman cartoon. It became a sort of mania with him and by the time he signed his first contract with the Tribune-News Syndicate in 1935 to do "Smokey Stover," his "foosayings" were decorating the walls of every drawing in that strip. With the dog with the gloved tail and all manner of mice and men carrying signs inscribed with his nonsensical mottoes, the comic with a firehouse background went like a house afire with the younger generation.

Within the last foo years scores of Foo Clubs have been organized independently by high school and college boys whose first official act is to elect cartoonist Holman "honorary foo" or honorary president. Fraternity dances often take on a foo motif with Holmanisms plastered all over the walls and at one of these hops recently a huge cardboard "Spooky" was made the vehicle for announcing dance numbers and amusing the dancers with Holman "foo-losophies." To wit:

The Holman brand of humor is strictly slapsick, of the "Hellza-poppin" variety. Anything goes, so long as it is considered funny. It reminds one of the custard pie throwing of early film comedians.

According to Mr. Holman, more than 100,000 copies of 10 cent "Big Little Books" on Smokey and his firehouse chief, "Cash U. Nutt," who smokes a double pipe, have been sold. Nickel and penny books also have appeared with these and other Holman characters. Foo has made such an impression on blase New Yorkers that a metropolitan tobacco shop makes up to order the fire chief's familiar foo pipe and a number have been sold at $2.50 each to foo fans. And speaking of foo fans, an Indiana admirer of the strip turned out last fall a silly symphony called "What This Country Needs Is Foo."

Considering the fact that Holman started from scratch four years ago as a syndicate cartoonist and today is earning in the neighborhood of $1,500 a month, his career might be called successful. It began at birth, Holman insists, and in his typical cartoon screwballese here's his autobiography:

"To make a long Foo short, here is the dope, and I do mean me. I was born in the state of frenzy, but for present purposes let's make it Indiana. At an early age my father died and I was sent out into the world to make a living for my mother, one cat with a sore tail, and no kitten. This all happened in Napanee, Indiana.

"My first job was running a popcorn machine for the local dime store. This is considered excellent training for a comic artist and no doubt accounts for a certain corny touch which so many of my gags seem to have. At 16 I was working in the art department of the Chicago Tribune. Having lost my eraser, I realized I could afford to make no more mistakes so Scripps-Howard made the next one and hired me. For the next two years I drew no crowds but plenty of drawings. My strip act laid an egg, the art editor threw it at me and I was on my way to New York.

"After seven years of itch and drawing a kid comic for the New York Herald Tribune I entered the magazine field. The following five free lance years were happy and profitable. Hundreds of my drawings infested the pages of Collier's, Saturday Evening Post, Life, Judge and Everybody's Weekly of London. This work drew the attention of the Tribune-News Syndicate and I was asked to submit a Sunday feature. The outcome was "Smokey Stover,' 'Spooky,' the cat, seven daily cartoons and Foo.

"I have always liked firemen. And now that I'm being paid to draw about their adventures, I can tell you I'm just crazy about them."

This has nothing to do with Holman, but I'll get round to it. I posted this on a yahoo group about comic publshers: "I recently bought two issues of a pocket book sized cartoon magazine which I believe to be from the early years of WWII. The first issue is called The Nirth Of A Nation, is published by Reminton Morse and has a note saying 'this entire book was created and produced by Harry A Chesler Jr. Features Syndicate. It has letters from a Private Bill and other material that all seems to be gathered from syndicated stuff. Some of the cartoons seem to be by Jack Cole, but there are two sorts... the older ones about a group of hillbillies called The Dewlittle Family, which only vaguely remind me of Cole and a couple of newer ones, which clearly are his work, even though they are signed. There are also a couple of cartoons that are not by Cole. There are also ten numbered columns by a Vera Smart under the heading My Daze.

The other one is Private Bill #3 and seems to be a continuation of the same series, with letters by Private Bill under the heading First Class Male. There are no more contributions by Jack Cole, it seems. As in the first issue Private Bill sometimes seems to write to living people and get ansers from them, similar to a couple of books that were done in the eighties by Henry Root and an American comedian who posed as a 'father'. In this issue, he writes to Fred Allen and gets a funny reply.

I did not know Chesler had a features syndicate as well and although it doesn't surprise me Jack Cole did cartoons for him, the dates seem a bit off. The Dewlittle Family cartoons are in Cole's oldest style and fit in with the time period of his work at Chesler's studio. The four of five later cartoons are more like his 1942 style and bear resemblance to the Ralph Jones material he did for Quality."

Anything you can add is welcomed.

As for the Holman link.. in the same lot I had a comedy magazine by Dell from the late thirties that had a couple of Holman cartoons. They looked very rough. I'd be curious to see his Nuts and Bolts from that early period.

Hi Ger -
Holman's Nuts And Jolts was done in the same style as Smokey Stover artwise. The jokes, though of the zany variety, were a little more down to earth than the humor in Smokey.

As for Chesler, I've seen a few of his digests with what appear to be newspaper strip attempts, also a prospectus that he issued for an adventure strip (the name I can't recall at the moment), but the only Chesler material known to have actually made it into a newspaper is his revival of Little Nemo (by Winsor McCay Jr) that ran at least 16 weeks in a few papers in 1937. Of his many other apparent attempts at newspaper strip sales I have never been able to find a printed example.

Could that Chesler adventure strip be
Dan Hastings? He's listed in your Mystery Strips "D".

In Comic Book Culture Ron Goulart says that when it was first published in Star Comics #1 in 1937 it contained a 1935 copyright. From there he conjectures that Chesler probably tried, without success, to syndicate it then (1935).

Hi DD -
Good eye, that would be the one. A sales letter with samples of Dan Hastings was auctioned on eBay something like a year ago. I recall that it went for big bucks. I refrained from bidding because I could see no indication on the letter that the strip was actually successfully syndicated (for instance, something to the effect of "...already a favorite in the Dungville Shoveler and other fine papers").