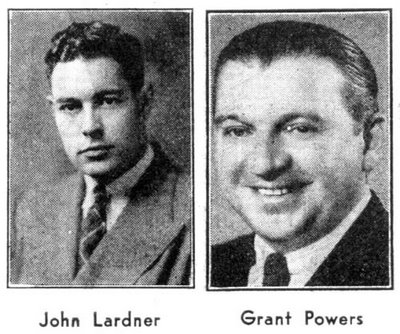 A new sports writer - artist team entered the syndicate field this week with announcement by Bell Syndicate that it has prepared for release Aug. 21 "Buck Hanson of the Badgers," a daily cartoon strip depicting the adventures of a baseball player.

They Know the Game
Friends for years but working together for the first time, both Lardner and Powers bring to their strip a first hand knowledge of the great American pastime gathered during years of covering the major league teams. Their character, who will cavort in the strip the year around, Lardner describes as "a southpaw pitcher with a southpaw brain but a right-handed heart."

Lardner, 28, a newspaperman since he left Harvard in 1929, has established himself as a leading sport columnist in 10 years. He first went to work for the Paris Herald, European edition of the New York Herald Tribune, and got his early newspaper training under Stanley Walker, then Herald Tribune city editor, now editor of the Philadelphia Evening Ledger.

With an unusual style of sports reporting, Lardner has acquired a reputation as a humorist, following, it appears, in the footsteps of his father, the late Ring Lardner, famous American humorist. NANA has distributed young Lardner's column, "From the Press Box," since 1933. He also writes a weekly column, "Sport-Week," for Newsweek magazine. Married, he is the father of one child.

Powers Now Free-Lancing
Starting out to be an architect, Cartoonist Powers' career was sidetracked by the World War and he was assigned to mapping the war's battlefields for the National Museum. During those days, he also was a regular contributor to Stars and Stripes.

He joined the staff of the New York Daily News in 1921, and remained there for 17 years, illustrating the sports columns of Paul Gallico and others and covering sports on assignment.

The Buck Hanson strip (then titled Buck Haney - Allan) appeared for a time in both the New York Daily News and the Chicago Tribune in 1937. Resigning last year from the News to free-lance, Powers does his work in his cottage at Auburn, Maine.

Bell this week also announced Sept. 18 as the release date for "Old Timer", a daily panel drawn by Ed Wheelan, creator of the comic "Minute Movies" for King Features Syndicate, believed to be the first comic strip to introduce serious continuity and straight drawings.

Wheelan, veteran penman, after leaving behind the art editor's post on the Cornell Widow, college monthly humor publication, drew cartooons for the old Brooklyn Standard-Union. He subsequently worked for the New York Journal, San Francisco Examiner, San Francisco Call, and the New York American. It was on the latter paper that his "Minute Movies" strip was created.

Note from Allan - has anyone seen "Old Timer"? I've never found a sample.