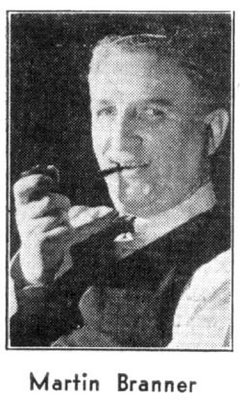 Martin Branner believes that modern married couples who work have very little time to devote to marriage. Because this condition prevails in a great many of the country's urban centers, he illustrates this phase of life in his comic strip "Winnie Winkle, the Breadwinner," which is syndicated by the Chicago Tribune-New York News Syndicate.

Instead of showing the irate wife bouncing a rolling pin off her husband's head (a type of comic dealing with married folks years ago), Mike (as he is known to his friends), tells the financial status, budget troubles, in-law interference and the other travail that enters the lives of young married folks.

And newspaper readers like it. This month, as he looks back on 19 years of successful strip characterization, satisfying results appear on the black side of the ledger. One note reads: The strip appears in 125 newspapers in America and Europe, with a circulation of more than eight and a half million.

On the eve of entering his 20th year of continuous employment with the syndicate, Mike, drawing on some of his own experiences, is illustrating what can be called a cartoon biography of himself and Mrs. Branner. Now 51, the cartoonist ran away and got married to a professional dancer, Edith Fabbrini, when he was 18 and she was 15.
He spent his next 15 years playing stock, musical comedy and vaudeville on the Keith Orpheum and Pantages circuits, and some lesser ones. They hit the Palace Theater on New York's Broadway the second week it opened and often after that. Their dancing act was called "Martin and Fabbrini."

The work was hard and the earnings little. Two shows a day was rapidly changing to three and more and bookings became scarce during and after the war. Between jobs, Mike resumed his drawing, interrupted when he got married. Shortly after the Armistice, he got an offer from the Bell Syndicate to do a daily cartoon called "Louie the Lawyer."

He accepted but earned so little that he went back to vaudeville, continuing with his comic, making deadlines in dressing rooms, hotel rooms and between train connections. When his contract ran out, he did a Sunday page called "Pete and Pinto" for the New York Sun and the old New York Herald. This comic ran 20 weeks and paved the way for his recognition by his present employers.

Shortly after the birth of the New York News in 1919, Captain Joseph M. Patterson, publisher, who closely supervises the syndicate's comic strips, was shopping around for a working girl comic. Mike made the grade with his samples of an average stenographer.

Captain Patterson gave the strip its title, the same it bears today. The News publisher has taken a keen interest in the Branner strip and recently suggested that Winnie and her husband, Will Wright, become dancers. Their marriage has been a series of hard-luck stories.

The dancer-cartoonist hasn't changed much through the years, his colleagues say, except for his greying hair and a slight bulge amidships. He still looks as if he could beat a pretty good toe tattoo on the boards. Devoted to his family, he spends his time away from the drawing board with Mrs. Branner and their two young sons, Bernard Donald, 16, and Robert Jay, 11. With them, his summers are passed boating and swimming in Connecticut.

Comments:
Thanks for the reprint!
I was just wondering whether you might be able to tell me the issue of Editor & Publisher in which it appeared.. and perhaps the page number? I would really appreciate it.