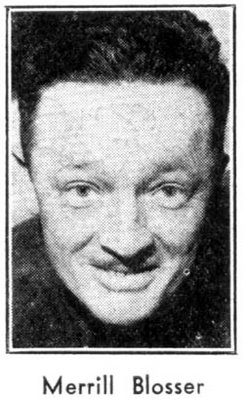 At eight o'clock Wednesday morning, Sept. 25, Merrill Blosser, NEA service creator-cartoonist of "Freckles and his Friends," sat down to his drawing board and began working on his strip. He sketched until two that afternoon, covered his board and relaxed. It was his way of observing "Freckles" and himself entering their 25th year as a daily newspaper feature.

"Freckles" made his first appearance in strip form (he had appeared a few weeks earlier as a panel) on Sept. 20, 1915, and very few of the present-day readers would be able to recognize him. When he made his newspaper bow, "Freckles" was about six or seven years old. Now he is 17, a high school senior, and captain of the football team.

Blosser Is NEA "Old-Timer"
In point of service, Blosser is the "old-timer" among NEA Service comic artists, "Freckles" being the oldest NEA strip. Yet Blosser, in his middle forties, looks 10 years younger both in his appearance and outlook. Enthusiastic, he has the drive and love for fun of the high school youngsters he draws.

His chief hobby, he tells you, is "living." He likes to take moving pictures, to go to football games, to mingle with kids, go for long automobile drives, which he and his wife do several times a week.

He closes up shop every day at about two in the afternoon, which leaves him the rest of the day for recreation.

Because he is able to do this, Blosser is the envy of virtually every other comic artist of his acquaintance, not one of whom has been able to master the deadline bugaboo the way he has.

Has Licked Deadline Bugaboo
In nearly a quarter of a century of drawing for daily publication, Blosser never has permitted himself to get behind. He tells you that he realized early in his career that he would never have any fun, or peace of mind, unless he licked the deadline problem at the start by staying religiously ahead of his schedules.

Consequently, he sets aside a certain period each day for drawing and planning and sticks to it as meticulously as though he were punching a time-clock in an office.

The NEA cartoonist was born in Nappanee, Ind., where he grew up in a small town community much like the Shadyside locale of "Freckles and His Friends." For the last dozen years or so he and his wife have lived in Los Angeles.

Blosser's daily strip now is used by more than 500 newspapers, while his Sunday page appears in 130, NEA says.

Note from Allan: actually Freckles and his Friends debuted on August 16, 1915.

That's a pretty general question about a cartoonist who was in the public eye for over 50 years. Blosser was probably written up dozens if not hundreds of times over the years. What sources have you surveyed so far?

Not many, we have gathered mostly one liners or paragraphs from a few web sites, most state or say the same thing. Figured you might have some more information or reference links. I'm not very educated on Blosser so were not sure where to get in depth details. I have ordered a few books on comics that give very little details on him, or the strip. We did find a site (http://www.luciefield.net/hazelmerrill.html) which gives his bio, but it's very limited. You would think someone would have more details with information on him or the strip because it ran for over 50 years. -Steve Cottle

Hi Steve -
You're not going to find in-depth bios in the standard references -- they just don't have room. But they're excellent jumping off spots. For instance, I see that he spent most of his later life in Pasadena. I'd check to see if he has any living relatives who could talk to you -- could very well be some still living there. Since he was working at the Plain Dealer in 1915 (again, from a standard reference) I might order up the microfilm of that paper to see if they did a profile on him when he graduated to doing Freckles (a long shot, but possible). You might also contact OSU to see if they can offer any help based on their vast collection. Have you checked to see if he left his papers to some library? And what about Henry Formhals' family? Maybe you can track down one of them.

The Nappanee Library has a tape recording of Merrill Blosser's sister talking about her brother.

This is all very interesting about Merrill Blosser and Freckles. I am the one that has the page on Lucie's Genealogy. I also have the tape of my grandmother (Hazel Blosser Grasz) talking about Merrill. My brother and I each have 2 original panels of his cartoons. Mine are pictured on my web site. I was only 4 when I moved away from Nappanee so I never really I knew him. He did not live there when I did. My parents used to go to La Verne CA when he lived there. I am still in contact with one of his nieces who lives in McMinnville, Oregon. She might know more about him. Gene Field

I have an original charcoal drawing of "Freckles" with the inscription: To Marcelyn Bowles from Blosser. If you have interest call me at 541-261-4103