Today I'm going to start on a new series of posts relating news stories from Editor & Publisher from 1939. Here's the announcement of the new military adventure strip Navy Bob Steele. Interesting to me was that they seemed to want editors to think of the new strip as a complement to Superman. Considering the great syndication success of the superhero strip, I suppose I can understand McClure hoping that another adventure strip could ride its coattails. 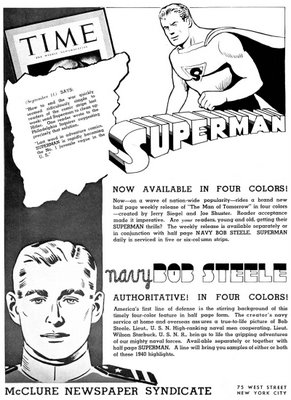 "Navy Bob Steele," a half page Sunday strip in full color, by Lieut. Wilson Starbuck, U.S.N.R., is being offered by McClure Newspaper Syndicate. Its introduction will come in mid-November, the syndicate said, at the same time that "Superman," now a daily strip distributed by McClure, appears in Sunday half page size. The latter comic, by Jerry Siegel and Joe Shuster, of Cleveland, was introduced last January.

The Bob Steele strip, which will be sold separately or with "Superman," will be "the inside story of the United States Navy," according to the announcement. Many of the incidents were inspired by active service experiences of Lieut. Starbuck, who at the age of 19 won a commission and was placed in command of U.S. submarine chaser No. 20 at New York in 1917. During the war he also served on the U.S.S. Shawmut and engaged in mine laying in the North Sea. After the armistice he was transferred to the air detachment of the Atlantic Fleet, where he learned to fly. He is now a senior grade lieutenant in the Naval Reserve.

"Superman"’s debut in the fall as a Sunday strip will bring new laurels to two youths in their early twenties who conceived the idea for their strip during their days in Cleveland high school. The strip deals with the adventures of the sole survivor of a cataclysm on a distant planet, sent to earth as a baby on a small rocket ship. In manhood "Superman" becomes a reporter and uses his gifts of strength and super-intelligence to combat evil-doers. Shuster is the artist and Siegel does continuity on the strip.