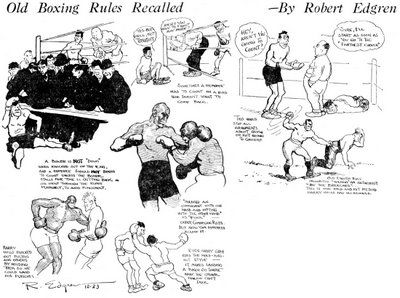 Robert W. Edgren, 65, sports editor and cartoonist, whose work was syndicated by Bell Syndicate in the U. S. and by the syndicate's Canadian representative, Dominion News Bureau, in Canada, died Sept. 9 at his home in Carmel, Calif., after a series of heart attacks.

Although best known in recent years for his syndicated column and cartoons, known as "Miracles of Sport," he was at one time a political cartoonist, and was court-martialed by Spanish authorities for drawings he sent from Cuba during the Spanish-American War.

Began on S. F. Examiner
Mr. Edgren began his newspaper career in San Francisco in 1895, when he joined the staff of the Examiner, the original W. R. Hearst newspaper. From the Examiner he was transferred to the old Evening Journal in New York and appointed political cartoonist. During his Spanish adventures, his drawings, "Sketches from Death," printed in the Journal and other Hearst papers, were chiefly war atrocities.

They were so extreme that Mr. Hearst wired the cartoonist: "Don't exaggerate so much." Angered, Mr. Edgren proceeded to collect 500 photographs to prove the accuracy of his work.

The pictures were subsequently displayed before Congress, and caused considerable excitement.

Was Independently Wealthy
He became associated with the old New York Evening World in 1904 as sports editor. In addition to a daily column and sports cartoon, he was executive editor in the sports section when that paper was the leading authority in the field of sports in America.

He returned to live in California after the World War, and built a home on the Monterey Peninsula. He was appointed to the California Boxing Commission by Governor Rolph, resigning in 1932 because of ill health.

Mr. Edgren was made independently wealthy by a kindness to a friend, to whom he loaned money before the World War to help his struggling leather goods business. When the war started, the cartoonist's friend repaid the loan with stock that tremendously increased in value.

The cartoonist's son, who had been collaborating with him in recent years, will continue the feature, Bell Syndicate told E & P.

Comments:
I have a small collection of 4 original Robert Edgren cartoons, primarily political. Do you know if they hold any value or who would be interested in them?