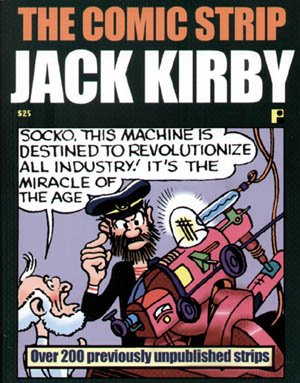 The Comic Strip Jack Kirby (ISBN 1-56685-028-2) is hot off the presses from Greg Theakston's Pure ImaginationPublishing. I've been eagerly awaiting this volume for, oh, about ten years now, since Greg told me he intended to publish a full book of Kirby's rare newspaper comic strips.

Theakston whet our appetites back in the late 80s with his Jack Kirby Treasury volume, and this book admittedly covers much the same ground. A lot of the editorial matter is repeated from there with some new stuff here and there. This is a disappointment for me, since I was hoping to learn more about Lincoln Features, the H.T. Elmo syndicate that employed Kirby in 1936-39. However, considering the paucity of information out there about the syndicate I can't hold this against Theakston.

This volume reprints quite a bit of Lincoln Features material, most of it from syndicate proofs in Kirby's own collection, so it looks great. The editorial cartoons, very few of which had been printed in the earlier book, are especially wonderful. I do have to take issue, however, with some of the material that Theakston represents as Kirby's work. While I am admittedly no expert in identifying art styles, I'm convinced that some material, and keep in mind that it was all signed with pseudonyms, is not Kirby but in fact the work of Elmo and others in his stable. For example, some of the Your Health Comes First panels, and all of the Laughs From The Days News are, in my opinion, the work of other hands. No matter, really, though, since I for one am certainly in the market to see any of the rare Lincoln strips.

The other problem with the Lincoln material, at least from this researcher's standpoint, is that being from proofs we don't know if it ever actually ran in any newspapers, and Theakston doesn't seem to have found any proof either, since the editorial matter is sometimes vague on that point. Of course we can enjoy such strips as Cyclone Burke and The Black Buccaneer no less for it.

In addition to the Lincoln Features material, we also get a run of Blue Beetle dailies from Fox Feature Syndicate. The book reprints the strip from the first, 1/8/40, through 3/9/40. The reproduction on some strips is excellent, others are pretty awful, and obviously from microfilm or really bad tearsheets. For some reason this run is followed with a reformatted run translated into French. Considering the awful scripting, reading the French version might be a good choice.

Finally we get what I gather is a complete reprinting of Kirby's Lightnin' and the Lone Rider strips. These most likely never made it into newspapers, though that was the initial intention, but ran in the Famous Funnies comic book. Kirby was definitely improving as a cartoonist by this time, and the art here is excellent. The material is well reproduced for the most part, but where Kirby applied tones it tends to turn into a muddy mess.

While the book is far from perfect, it is nevertheless an impressive collection of extremely rare material, and I can only hope that you'll purchase a copy. Send a signal to publishers that there is a market for something other than the seemingly endless reycling of Caniff and Herriman strips!

I am only sorry I couldn't get the additional Health panels to Greg before the book went to the printer (and that the quality of my micro-fiche copies is so poor). The later Health panels had a series called Health through the ages, which was great.

As for art identification, Greg told me once that he used the lettering as an indicator as well. All of Kirby's stuff has the horse-shoe shaped letter U.

Hi Ger -
Seems to me that the shape of a U is a pretty thin thread upon which to hang an art ID. I think even early in his career Kirby's style is recognizeable enough that I'd want something more definitive. These U's seem like pretty conventional lettering to me...

Fwiw, I have cleaned up a lot of microfilm material in my day and I think you did a creditable job with what you must have had to work with.