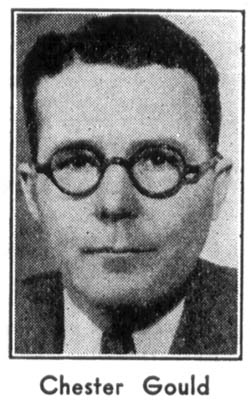 Back in 1930, Chet Gould decided there was a field for a hard-hitting, honest police character who "gets his man." His conception of such a character was the outgrowth of the "roaring twenties," during which law and order were at a comparatively low ebb.

Now in More Than 160 Papers
Originally planned as "Plain Clothes Tracy," the strip title was changed to "Dick Tracy" when it was submitted to Capt. Joseph Medill Patterson, publisher, New York News, in 1931. Capt. Patterson, who saw great possibilities in such a strip, liked it and hired Gould. The strip was launched in the Chicago Tribune and New York News as a Sunday color comic on Oct. 4, 1931. A daily continuity was added the following week. Today, "Tracy" appears in more than 160 newspapers in the U. S. and abroad.

Among Tracy's many devoted followers are the country's leading law enforcement agents, including J. Edgar Hoover, head of FBI; Col. Homer Garrison, director of the Texas State Police; and Eugene M. McSweeney, commissioner of public safety for Massachusetts and in charge of state police. The strip has been voted "tops" in several newspaper polls and reader interest surveys and has appeared as a movie serial, along with being dramatized over the air. Dick Tracy is also one of the few cartoon strips ever to appear on exhibition in a major art gallery.

Keeping Tracy a human character, true to his environment, is Cartoonist Gould's chief problem. He has often placed his hero in many a realistic police situation. For this Gould has been severely criticized sometimes by readers who like their heroes meek in muscle but strong in mind. Gould answers his critics by explaining that gun play and brawls are necessary in a police strip. "Few police officers in real life go unarmed or escape physical encounters with criminals in their fight against crime," said Mr. Gould in a recent interview with Editor & Publisher.

As to any unfavorable influence on the juvenile mind, Mr. Gould recalls that kids played "cops and robbers" long before a police cartoon feature was ever thought of. Primarily a symbol of law and order, Dick Tracy is not the type of officer to play ostrich and at the same time help to solve the crime. Every episode is designed to show how the criminal weaves his own web of defeat and eventually shows himself up to the reader for what he really is - a menace to society.

Stresses Action, Pursuit, Deduction
"I try to keep the detective deduction angle the main theme of underlying interest," explained Gould. "Pursuit, deduction and action are the three ingredients that I stress in the various episodes dealing with Tracy's adventures."
From a technical standpoint, Gould endeavors to show by pictures rather than words what actually happens. By keeping his drawings as purely pictorial as possible, Gould is able to reduce the amount of space ordinarily given over to "balloons" in comicstrips.

He is as enthusiastic as ever about Dick Tracy, although he admits that sometimes he has to scratch around considerably for new ideas. Like so many other Tribune-News syndicate cartoonists, Chet Gould credits Captain Patterson as being the guiding genius behind his work. His encouragement and ideas for new situations have helped him tremendously, Gould stated.

Born in Pawnee, Okla.
As for Dick's creator - Chester Gould was bom and schooled in Pawnee, Okla. While attending high school, he took a correspondence course in cartooning and later landed a berth on the old Tulsa Democrat. He quit that job a few months later and spent the next two years at Oklahoma A. & M. College. In 1921, Chet returned to art, becoming sports cartoonist for the Oklahoma City Daily Oklahoman. Another young cartoonist on the same paper at that time was George Clark, creator of "The Neighbors" and "The Ripples." Neither dreamed they would be working for the same syndicate 18 years later.

Gould's next move was to Chicago. After graduating from Northwestern University in 1923, he enrolled for night courses at the Chicago Art Institute. He worked for the Chicago Evening American prior to conceiving his idea for drawing Dick Tracy.

He is married and lives with his family on a farm near Woodstock, Ill. His hobby is criminology. Most of his spare time is spent with Chicago police, touring the FBI offices in Washington, D. C., studying crime detection at Northwestern's crime laboratory, or visiting mid-western penitentiaries.

Comments:
It's a fine profile.

But, it's was the Detroit Free Press that debuted Tracy on October 4, 1931. The New York Daily News started the daily a week later, on October 4! The Chicago Tribune picked it up later.

I meant October 12, 1931, that the New York Daily News started the dailies!

Sorry folks, meant to put a footnote about the inaccuracies. Yes, the Sunday starts in the Detroit Mirror 10/4/31, the daily starts in the NY Daily News 10/12/31.

Sorry I meant about the Detroit Mirror that started Tracy first, instead of the Free Press.