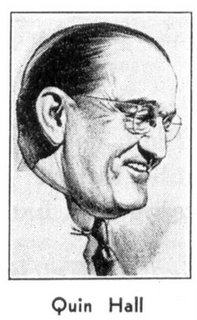 The AP Feature Service will start off the new year with a new comics panel, "The Doolittles," by Quin Hall, M. J. Wing, editor, announced this week. It will make its first appearance in more than 90 newspapers on January 1, he said.

According to the Feature Service, "The Doolittles will be a cartoon history of a typical American family. Rather than a collection of nostalgic tintypes from the old family album, the feature will be a candid cartoon folio of the doings of modern middle-class people."

Hall, creator of the new AP feature, is a native of Lacon, Ill., where, as a youth, he had his first taste of newspapering as junior reporter and typesetter on the local weekly, after high school hours. Following an absence of two years, during which he studied and shoe clerked, he got into the newspaper business again on the Oklahoma City Times. Two years after he joined the paper he was made sports editor.

After further study at the Chicago Academy of Fine Arts he joined the art staff of the Chicago Daily News, and thereafter did sports and political cartoons and a wide variety of feature assignments in many parts of the country.

A new cartoonist, Ralph A. Kemp, Morristown, Ind., free-lance, will be introduced to the national syndicate field Dec. 11 when his daily one-column panel, "Tode Tuttle," lovable old character who will express the homely humor of the Indiana Hoosiers, will be serviced by the Jones Syndicate, New York, Paul Jones, president, told the column this week.

Promoted only with the past fortnight, Mr. Jones said, the feature already has been bought by the Kansas City Star, Detroit News, St. Louis Post-Dispatch, Omaha World-Herald, Philadelphia Record, Indianapolis News and Peoria (Ill.) Star, and others. Kemp, Mr. Jones said, has signed a 10-year contract with the Jones Syndicate.

(see a sample of Tode Tuttle at this blog entry) 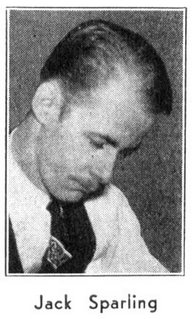 A new daily comic strip based on the adventures of a Washington correspondent, created by the "Washington Merry-Go-Round" columnists, Drew Pearson and Robert S. Allen, was announced this week by United Feature Syndicate. The new feature, bearing the title, "Hap Hazard," is expected to be released Feb. 1. It will be drawn by Jack Sparling, a former staff cartoonist for the Washington (D. C.) Herald, his first comic strip effort.

UFS describes the new feature as a humorous continuity strip about a fictional young newspaperman amid the glamor and comedy of the nation's capital, where he meets real, factual individuals whose names make newspaper headlines. It will be the first comic strip to use the actual names and pictures of famous persons as regular characters, according to UFS.

Pearson and Allen conceived the idea for "Hap Hazard" as an outlet for numerous stories they are unable to get into their daily column of Washington news. In addition, they both have had dramatic careers, and long have felt the itch to fictionize some of their own experiences.

(note from Allan - the title of the strip was changed to Hap Hopper before the initial release, which was on January 29, not February 1)

Captain Bruce Bairnsfather, creator of the world-famous comic character, "Old Bill," during the World War, will do a new series of Old Bill and a new character, "Young Bill," his son, Bell Syndicate announced this week. Today, as in 1914, Bell again has acquired the American syndicate rights for the feature. The feature, for release once a week, will be a three-column panel. The locale for its action will be divided between London, where Old Bill is an Air Raid Patrol warden (he's now too old to fight) and "somewhere in France," where Young Bill is with His Majesty's Expeditionary Forces.

Comments:
I have scanned in a dream sequence from the same weeks the second and third week of the Spirit daily ran, in which the girl reporter who was also in the strip dreams she meets Hitler and Mussolini. Know it?

Hi Ger -
Assuming you're talking about Hap Hopper, most likely not. I've read a short run of the strip and found it to be surprisingly lacking in quality, given the big names associated with it. The plot discussed in this article, of using real Washington news in the strip, sounds like an interesting twist, but I don't recall in my limited reading of the strip that twist getting any use. Not really surprising that the strip got a lot of initial sign-ups but then lost papers fast after the first year or so.