While Thornton Burgess was never directly involved in newspaper comic strips, his most famous creation, Peter Rabbit, was a long-running comic strip. His own fame came from writing newspaper text stories about his woodland characters. These daily newspaper columns were illustrated by Harrison Cady, who was also responsible for drawing the Sunday strip version until 1948. 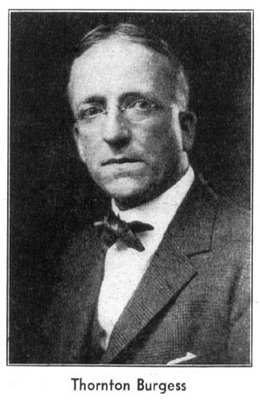 The newspaper business has a way of producing specialists, those experts on politics, medicine, science, music and the arts, but among all of them there is none more valuable than the champion of entertaining children. Perhaps the greatest journalistic exponent of this specialty is Thornton Waldo Burgess whose daily writings appear in more than 40 newspapers through the New York Herald Tribune Syndicate. When he finishes his 10,000th story, he says, he will retire.

For the last 27 years he has been pounding out dramatized facts of nature for the enjoyment and education of children. In all he has written 8,725 stories for his newspapers and has had 80 books published which together have sold more than 5,000,000 copies.

Makes Home in Springfield, Mass.
Needless to say his prolific production has brought him fame and fortune. He is unparalleled as a writer of nature stories for children. Yet, Thornton Burgess is a quiet and unpretentious man, living comfortably in a modest, typically New England home in the park section of Springfield, Mass.

Thornton Burgess was born in the little Cape Cod town of Sandwich, in Barn Stable county, Mass., on Jan. 14, 1874. He was still a baby in his mother's arms when his father died. Consequently, when he was old enough he had to go to work. Because he could not afford to join in with the other boys at their games, he spent what little idle time he had walking through the woods and fields. He became so fascinated by nature that he decided to make it his life's study. On Dec. 1, 1895, he heard that the Phelps Publishing Company in Springfield needed an office boy and he took the job. In the 12 years that followed, he worked hard and made rapid progress. He learned how to write and how to edit copy. He finally became an editor of Good Housekeeping Magazine. Meanwhile, he had not given up his interest in nature, but continued it with ever increasing eagerness.

Eventually the inevitable happened; he merged his two strongest interests and he was successful almost overnight.

Told Stories to Son
Like so many things which prove to be the most important, the writing of nature stories just came to Burgess naturally, unconsciously, like flying to a bird. He had married in 1905 and was the father of a son. In the evenings he held his son on his lap and told him of the fascinations and mysteries of nature. When the boy went to Chicago to visit his grandmother, each night after work Burgess would sit down and write one of these stories to be mailed to his child. All the stories were based on "what Old Mother West Wind had told him."Fortunately, the boy's mother kept the stories and later returned them in a batch to Mr. Burgess.

One day he showed them to a friend in the advertising business who read them with great interest and asked if he could borrow them for a few days. In less than a week, Mr. Burgess received a letter from Little, Brown & Co., publishers, asking for all the stories he had written on nature, with a view toward making them into a book.

With a feeling of skepticism, he mailed the 14 stories he had written. These, too, were accepted and the publisher asked for two more to complete the volume. "I went up to my room," he recalls, "and wrote the remaining stories that evening and sent them off. I felt as though I owned the world."

The book, "Old Mother West Wind," hit the bookstores in 1910 and was an immediate success. The publisher clamored for material for another book. But Mr. Burgess' answer was, "I am sorry, but I have written myself out. I have not another nature story in me." But somehow the ideas which Mr. Burgess thought he had exhausted continued to shape themselves and before long, less than a year, parents were scrambling for a copy of "Mother West Wind's Children." The ideas have continued to come so fast that his publishers have been printing his books at the rate of more than two a year.

In 1912, an important event for the future of the young writer happened. He lost his job through the sale of Good Housekeeping. Since that day he has devoted himself to his nature stories and has never worked for anyone but Thornton Waldo Burgess.

Competes with Own Early Work
However, as a business man, Mr. Burgess is and never has been an Andrew Carnegie. Just after he found himself without a job, he went to New York where he signed a contract with the now defunct American Newspaper Syndicate, an organization then owned by New York Globe, Boston Globe, Philadelphia Bulletin, Kansas City
Star and Chicago Daily News. When he affixed his name to the document, he failed to notice the omission of one word and, consequently, for the last 20 years he has been his own strongest competitor. He says that when he signed the contract he thought he was giving the syndicate the right only to first prints of his writings. The word "first," however, did not appear in the agreement. He did not discover the omission until he left that service to become associated with the Herald Tribune Syndicate in 1919. Since that time, he says, some newspapers have been buying stories which he wrote when he first was syndicated.

Can't Compete with Self
"Those early stories are still being printed in some newspapers, he says, "and at a rate so low that I cannot even compete with myself. At one time my stories were appearing in more than 80 newspapers but because of my rivalry with myself, that list has been reduced to 40 papers." He said that the Springfield Republican.and the Montreal 5tar have been printing his stories (the currently written ones) for 20 years.

Since signing with the Herald Tribune syndicate he has turned out stories at the rate of from none to 12 a day, according to his frame of mind. He has never rewritten a story in his life, he says, nor has he failed to complete one.

"Some have taken longer than others, that is true, "he says, "but they all are finished. I never labor on a story. If the idea doesn't come, then I forget the whole thing. I try something else, anything else, and presently I will return to a half-written story, run it back into the typewriter and finish it in a jiffy."

Stories Built Around Facts
But there is far more to the method of Mr. Burgess' writing, which has singled him out of the thousands who have tried to write similar stories, far more than the intangible genius of the man. He has a basic policy, one which holds true to everything he has written.

"Each story I write," he says, "is built around a fact. There are stories on the appearance of animals and on their habits. I also draw on the mystery of animal life, a mystery which we will probably never penetrate. When I write a story about the white tail on a rabbit, it is more or less meaningless to little children. But when I say that Peter Rabbit has a white patch on his trousers, then they remember." Simple, certainly, but educational too.

It is Mr. Burgess' particular ability, his thought and simple kindness which have made him the nature champion he is. It was this combination of ideals which caused Dr. William T. Homaday, director of the New York Zoological Society, to say, "Any man who can find his way into the hearts of a million children is a genius. If he carries a message of truth he is a benefactor. Thornton W. Burgess is both."

Through his writings, Mr. Burgess has become an expert in the study of zoology. He has learned the color of a herring's eyes. He has learned that deer eat trout, and thousands of other facts which have 'built up his knowledge of his subject. As a boy he wanted to be a naturalist. Today he is vice-president of the Massachusetts A.S.P.C.A., vice-president of the Massachusetts Audubon Society and a trustee of the Boston Society of Natural History. Through his Green Meadows Club, which was built up through his newspaper stories, he has established bird sanctuaries covering more than 8,000,000 acres. He is recognized throughout the entire zoological profession as a writer of fact.

As a boy he wanted to go to college. Today he holds a degree of doctor of literature from Northeastern University. But all these honors have come to Mr. Burgess as he worked over his daily stories. He wanted them, true, but he did not consciously pursue them. They came to him as pleasant surprises. There has always been, in addition to his respect for fact, one motivating power behind his writing, one which more than any other took him over the top. It has been his love for children. Everything he has written, he says, has been directed toward their pleasure.

Most of his mail is from youngsters. Many of the letters are simple and immature, but they tell a child's story and Mr. Burgess reads them with keen interest. Most of them are addressed to him in care of the syndicate or the particular paper in which his stories are read, but many others to "Peter Rabbit's Godfather, U. S. A.," or to "Farmer Brown's Boy, Green Meadow." His telephone rings on an average of six times a day with calls for help for a sick animal. He answers them all.

Last week in the middle of the night, he was aroused by an excited man who wanted to know how to remove a skunk from his cellar. The next day a woman called to find out what she should do to cure her parrot of a cold. Mr. Burgess does not have to advertise; he tells people that he will help just by the way he writes.

His whole philosophy on writing can be summed up in one simple thought:
"I write for the education and entertainment of young people; tragedy comes soon enough into the life of a child." With such an ideal, Thornton Waldo Burgess was not made to fail.

Yep thats exactly what i did.