The Rolfe mystery gains two new data points. D.D. Degg, in a reply to yesterday's post, points us to an original rough for Brenda Breeze that is quite clearly signed Rolfe Mason. On the other hand, I found this article in the October 21 1939 issue of E&P, where they give a pretty convincing bio of Rolfe Memison.

Now being the provincial cuss I am, I know practically nothing about Brit cartooning. Might any of our readers from across the pond be able to tell us if there really was a Rolfe Memison who did a lot of cartooning for plenty of big name publications?

And might it be that Memison really was the originator, and later someone named Mason took over the strip, and kept creative continuity by signing himself as Rolfe Mason? Or did Memison simply have a signature that looked like 'Mason'? 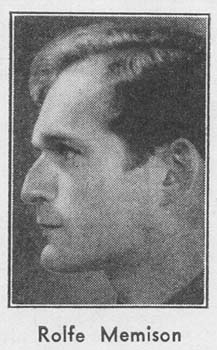 A new Sunday comic, "Brenda Breeze," a half-page in pantomime by Rolfe Memison, Continental humorous artist, will make its Amer­ican newspaper debut Oct. 22 through NEA service, it was announced this week.

Submitted to NEA "several months ago," when the service was shopping around for a new type of girl comic, according to Fred S. Ferguson, NEA president, the feature has been signed up under "a long term contract." This marks Memison's first appearance in U. S. newspapers.

Features Pantomine
Memison, or "Rolfe," as he signs his work, is a young English artist who came to the U. S. to live a little more than a year ago. He has been free­lancing since, his work appearing in the country's leading slick paper mag­azines. An expert on pantomime, his favorite medium of expression, he uses it exclusively in his new comic. "Brenda Breeze" never says a word.

Prior to 1936, Rolfe was "a serious artist," a painter of portraits and land­scapes. One of his paintings was ac­cepted by the Royal Academy in Lon­don last year. He might have been painting landscapes and portraits in Spain today if the Spanish Revolution had not come along and chased him back to England and into a comic art career.

The English chuckled over his car­toons and humorous illustrations in such publications as Bystander, Pass­ing Show, London Mirror, London News Chronicle, Sporting and Dram­atic News, Answers. His work also ap­peared in other European publications.

Started Career in New York
Born in England in 1906, Rolfe came to America for the first time in 1923, and it was here that he received his first artistic encouragement. He cop­ied a Rembrandt at the Metropolitan Museum of Art, New York, taking two days from his job of packing radio receivers, and the reproduction sold for $5. It determined him on an art career.

Three years later he went to Paris to study art and then came several years of traveling and painting through France, Italy, Denmark and Norway. Then to Spain for five years and back to England when Spain revolted. He continues:
"Last summer I returned to the U. S. to make this my permanent home, and settled in a studio on top of a midget Gotham skyscraper (six floors). It contains a drawing table, easels, Spanish pictures, bullfight posters, two guitars, a black cat and a blond girl with blue eyes named Barbara.

"She's an Indiana girl, reared in Florida. We were married last year, and she has become a whiz at cooking 'Paella Valenciana' and bouillabaisse, and posing in a Spanish shawl."

Comments:
I just ran across your piece about Rolfe (Memison) Mason from Saturday, November 04, 2006. You said “Rolfe Memison, internationally known artist and humorist, you can rest easy knowing that your rightful fame is restored, and no longer someone named Rolfe Mason getting credit for 23 years worth of pretty gals and pantomime yoks in the Sunday funnies.”
I was privileged to have the friendship of Rolfe Mason in the early 1980’s in California. He was one of the sweetest, gentlest men I have ever known. The photo of Rolfe Memison on the 2006 site is definitely a younger version of the Rolfe Mason I knew. D. Mack

I was a good friend of this wonderful man...loved him very much..so glad to see his work posted and he get some credit .