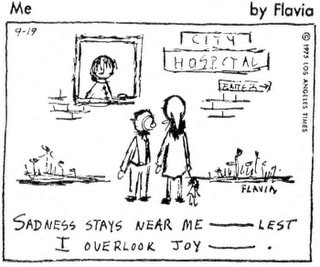 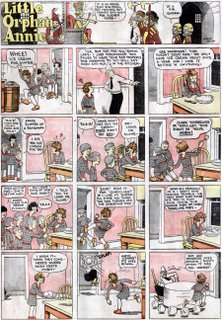 Here we have the very first Little Orphan Annie Sunday page, printed in the Chicago Tribune on November 2, 1924. Am I nuts or does it look to you like Sals Bostwick had a hand in the art?

One of the reprint projects that I would dearly love to do is to get the first year of Little Orphan Annie into print. Unfortunately much of it was apparently printed only in the New York Daily News, and the microfilm for that paper is in terrible shape, not nearly good enough to reproduce from. Does anyone out there have a clipped run of the strip from the beginning? I know a lot of people would dearly love to read Annie's early continuity when she was still at the orphanage.

Comments:
Little Orphan Annie has always been a favorite. Would love to see those early ones

From the Stripper's Guide Bookshelf

Among the more esoteric books on cartooning that occupy space on my library shelves would have to be Horseback Honeymoon. It is a 1907 memoir of a young couple, just married, who choose a rather unusual honeymoon - to ride on horseback from St. Paul, Minnesota to Seattle, Washington.

What does this have to do with cartooning? The bridegroom is Quincy Scott, an excellent cartoonist who was at the time freelancing comic strips to the New York Evening Telegram, World and Herald. Both he and his bride were accomplished artists, and they each contribute many wonderful sketches and cartoons of their hilarious and harrowing trip to the book.

Now I'll warn you beforehand that the book does not dwell on their artistic careers - we learn precious little about Scott's time in New York cartooning for all the great papers. There are a few tidbits, but any disappointment at the lack of discussion on this topic is more than made up for by the entertaining and interesting tale of their journey. The many cartoons are a wonderful bonus, but the book would be a great read even without them.

Horseback Honeymoon (ISBN 0-8467-0105-7) is out of print, but readily available on the used market. Here is an ABE Books search that finds many available copies.

Here is a newspaper story about the trip that was published in the New York Herald on April 29, 1907:

From St. Paul to Seattle in the saddle is the odd wedding tour on which a New York artist and his bride are to start next Monday. It will be about a 2,000 mile horseback journey, and Mr. and Mrs. Scott expect to cover it in 100 days, or at the rate of twenty miles a day.

Quincy Scott is a well-known young newspaper illustrator and cartoonist. His wife was Miss Ella L. Allen, of Seattle, Wash. She came to New York about a year ago to study art, and she and Mr. Scott met in the Art Students' League, of which both had become members. They were married last fall, but both were too busy then to indulge in any protracted honeymoon trip, so they postponed that luxury until now.

Their outfit will be military in its severe simplicity. Mrs. Scott will ride astride and will wear a blue flannel shirt and a pair of khaki riding breeches. She will carry a sort of divided skirt of the same khaki material, however, which may be fastened to the waistband of the breeches. Mrs. Scott expects to use this skirt only while passing through the more populously settled portions of their route, discarding it during the long, hard "hikes" across the plains and over the mountains. Both riders will carry light camp outfits, army saddles, rolled blankets and saddlebags. Their weapons will consist of a revolver apiece, carried in a belt and holster, a carbine, and a light shotgun. They also expect to take sketching materials.

... and that's all for now. So what did you think of Jack Daw's Adventures? The next time I need to run one of these strip interludes, do you want to continue with Jack's adventures or should I find something different? 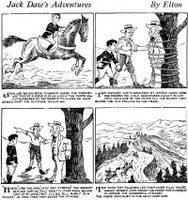 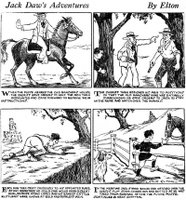 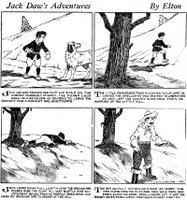 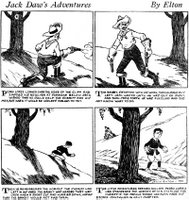 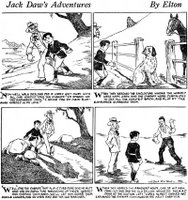 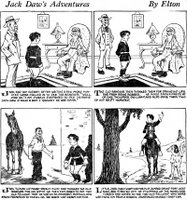 Comments:
I like them, though what else would you offer as a replacement?

Think of me as Monty Hall. You can stick with your Jack Daws, or take what the lovely Carol Merrill has behind door #2.

I'd favor something different. You've given us a pretty good slice of material on Jack Daw. 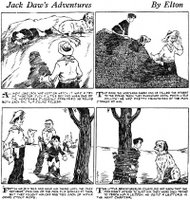 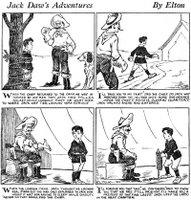 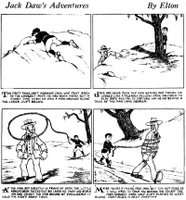 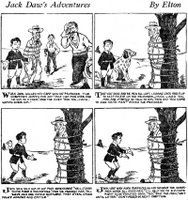 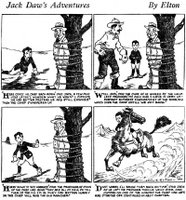 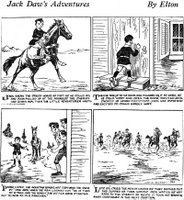 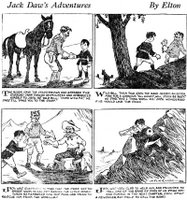 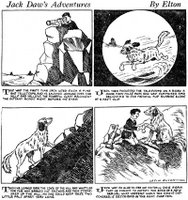 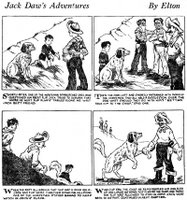 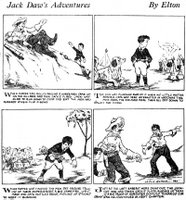 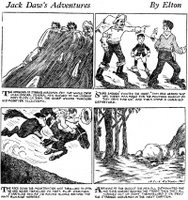 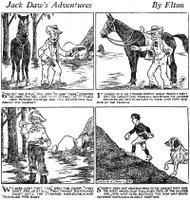 In my defense, the story gaps that you see in these past few weeks (like this week's footrace that never happens) seem to be original to the continuity and not the result of missing strips from my run. At least the paper these were clipped from didn't have any missing dates of which I'm aware.

On the off chance that someone else has a run of early Jack Daw, perhaps you could check your version to see if there are strips missing from this version of the run. 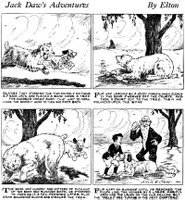 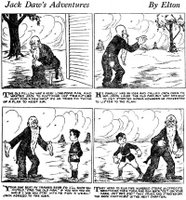 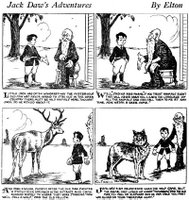 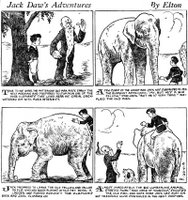 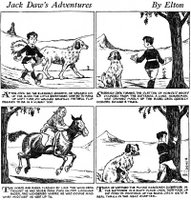 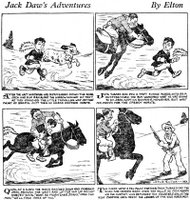 Comments:
This is a very interesting stip to say the least. I like whay you have done with you blog - keep up the awesome work.